The story of Prophet Salih – II 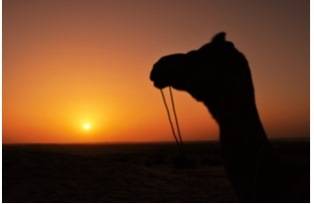 After they plotted to kill the she-camel, the disbelievers among the people of Prophet Salih

began to watch her closely, observing all her movements. As she came to drink from the well, Masrai, the man who volunteered to kill her, shot her in the leg with an arrow. She tried to escape but was hampered by the arrow. Qudar, his aide, followed her and struck her with a sword in the other leg. As she fell to the ground, he pierced her with his sword.

The killers were given a hero's welcome, cheered with songs and poetry composed in their praise. In their arrogance, they mocked Prophet Salih, but he warned them: "…Enjoy yourselves in your homes for three days. That is a promise not to be denied [i.e. unfailing]." [Quran 11:65]
Prophet Salih

they were saved because they had left the place.
Abdullah Ibn Umar

narrated that while the Prophet Muhammad

was passing by Thamood's houses on his way to the battle of Tabook, he stopped together with his companions

ordered them to empty the water-skins and give the prepared dough to the camels. Then he went away with them until they stopped at the well from which the she-camel (of Prophet Salih) used to drink. He warned them against entering upon the people who had been punished, "I fear that you may be affected by what afflicted them; so do no enter upon them." [Al-Bukhari]
The Story of Prophet Salih – I