Righteous Deeds with the Same Reward as Hajj and ‘Umrah - II 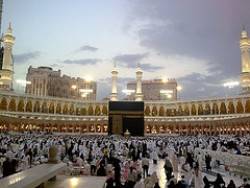 3)   Performing the Fajr prayer in congregation and staying in the mosque until sunrise to perform the Dhuha prayer:

Another righteous deed that substitutes for Hajj and ‘Umrah is performing the Fajr prayer in congregation and staying in the mosque, reciting Thikr until sunrise to perform the Dhuha prayer. The Prophet

said: “Whoever prays the Fajr in congregation, then sits remembering Allah until the sun rises, then prays two Rak‘ahs, he will receive the rewards of performing complete Hajj and ‘Umrah - he repeated that thrice.” [At-Tirmithi] [Al-Albaani: Saheeh]

4)   Attending the congregational prayers at the mosque and walking to the mosque to perform voluntary prayers:

said: “Whoever walks to [perform] an obligatory prayer in congregation, it is like Hajj [in terms of rewards], and whoever walks to [perform] a voluntary prayer, it is like a voluntary ‘Umrah [in terms of rewards].” [Hasan] Walking to the mosque to perform Sunnah prayers such as the Dhuha prayer as mentioned in the version of Abu Daawood. Al-Munaawi

said: “He who purifies himself at his home and comes to Masjid Qubaa’ and prays therein will have the reward like that of ‘Umrah.” [Ahmad, An-Nasaa’i and Al-Haakim] [Al-Albaani: Saheeh]

In addition, the Prophet

also said: “Whoever goes to the mosque of the Banu ‘Amr ibn ‘Awf, the mosque of Qubaa’, with one intention that is to pray therein, will have a reward like that of ‘Umrah.”

said, “I heard my father saying, ‘It is dearer to me to perform two Rak‘ahs in the Qubaa’ Mosque than visiting Al-Masjid Al-Aqsa twice. If people only knew the virtues of [praying in] the Qubaa’ Mosque, they would fight over it.’”

Performing prayers in the Qubaa’ Mosque does not entail traveling specifically for that purpose. However, when the Muslim visits the Masjid of the Prophet

it is an act of the Sunnah (Prophetic tradition) to visit the Qubaa’ Masjid, where Allah The Exalted revealed to the Prophet

said: “Allah is pleased with your purity, O people of Qubaa'.”

said, “A pious man saw a pilgrim who was heading towards Makkah. He said with eyes full of tears, ‘How weak I am! Let me follow your procession and I promise to be obedient to you as a slave.’ He took a deep breath and added, ‘This is the sorrow and heartbreak of a man who cannot go to the Ka’bah; how will the sorrow and heartbreak of the man who cannot reach the Lord of the Ka’bah be?’”

said, “O brothers, if you were prevented from performing Hajj this year, turn inward and exercise self-restraint.”

Righteous Deeds with the Same Reward as Hajj and ‘Umrah - III