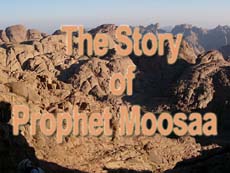 Allah Almighty inspired Moosaa (Moses), may Allah exalt his mention, to conduct his people from Egypt, but only a few of his people believed in his message. Almighty Allah revealed in the Quran (what means): “But none believed Moosaa, except [some] offspring [i.e., youths] among his people, for fear of Pharaoh [Pharaoh] and his establishment that they would persecute them. And indeed, Pharaoh was haughty within the land, and indeed, he was of the transgressors. And Moosaa said: ‘O my people! If you have believed in Allah, then rely upon Him, if you should be Muslims [i.e., submitting to Him].’ So they said: ‘Upon Allah do we rely. Our Lord! Make us not [objects of] trial for the wrongdoing people. And save us by Your mercy from the disbelieving people.’” [Quran 10:83-86]

Almighty Allah decided to put an end to Pharaoh’s crimes after He had given him several chances. Allah commanded Moosaa, may Allah exalt his mention, to depart, and the Children of Israel received reluctant permission from Pharaoh to go out of the city for a feast. They prepared themselves to leave Egypt. This departure became known as the Exodus. They carried with them their jewels and borrowed many jewels from the Egyptians.

In the darkness of night, Moosaa, may Allah exalt his mention, led his people towards the Red Sea, and in the morning, they reached the beach. By then, Pharaoh was aware of their departure, so he mobilised a huge army to pursue them.

The impatient among the Children of Israel soon became agitated and Yoosha' bin Noon (Joshua) exclaimed: “In front of us is this impassable barrier, the sea, and behind us the enemy; surely death cannot be avoided!”

Pharaoh and his army had seen the miracle, how the sea had parted, but being the pretender that he was, Pharaoh turned to his men and proclaimed: “Look! The sea has opened at my command so that I may follow those rebels and arrest them!” They rushed across the parted waters, and when they were midway, Allah commanded the sea to return to its former state.

Terror-stricken, Pharaoh, realising his end had come, declared out of fear, what means: “…‘I believe that there is no deity except that whom the Children of Israel believe, and I am of the Muslims.’” [Quran: 10:90] But Allah did not accept this declaration from the tyrant, and the waters closed over him, drowning him and his entire army.

Almighty Allah narrates (what means): “And We inspired to Moosaa: ‘Travel by night with My servants; indeed, you will be pursued.’ Then Pharaoh sent among the cities gatherers. [And said]: ‘Indeed, those are but a small band, and indeed they are enraging us, And indeed, we are a cautious society…’ So We removed them from gardens and springs. And treasures and honourable station – Thus. And We caused to inherit it the Children of Israel. So they pursued them at sunrise. And when the two companies saw one another, the companions said: ‘Indeed, we are to be overtaken!’ [Moosaa] said: ‘No! Indeed, with me is my Lord, He will guide me.’ Then We inspired to Moosaa: ‘Strike with your staff the sea,’ and it parted, and each portion was like a great towering mountain. And We advanced thereto the others [i.e., the pursuers]. And We saved Moosaa and those with him, all together. Then We drowned the others. Indeed, in that is a sign, but most of them were not to be believers. And indeed, your Lord – He is the Exalted in Might, the Merciful.” [Quran: 26:52-68]

In another chapter of the Noble Quran, Almighty Allah narrates (what means): “And We took the Children of Israel across the sea, and Pharaoh and his soldiers pursued them in tyranny and enmity, until, when drowning overtook him, he said: ‘I believe that there is no deity except that whom the Children of Israel believe, and I am of the Muslims.’ Now? And you had disobeyed [Him] before and were of the corrupters? So today We will save you in body that you may be to those who succeed you a sign. And indeed, many among the people, of Our signs, are heedless.” [Quran: 10:90-92]

The curtain fell on Pharaoh’s tyranny, and the waves threw his corpse up to the western seashore. The Egyptians saw him and knew that their god whom they worshipped and obeyed was a mere slave who could not keep death away from himself.

The story of Prophet Moosaa –II

The story of Prophet Moosaa -VI