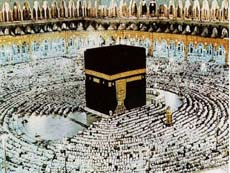 Allah the All-Mighty Says (what means): "This day have I perfected your religion for you and completed My favor upon you and have chosen for you Islam as your religion.” [Quran 5:3]

(may Allah exalt his mention), marking the completion of the Quran and the perfection of Islam. Islam is complete and perfect and is not thereafter susceptible to addition or abrogation. Being eternal and universal, the Islamic Law, which was made by God (Allah) Himself, Who knows what is best for us under all circumstances, is resilient and adjustable to the changing conditions of time and place.

The perfection of Islam is manifest in the fact that God (Allah) has made it reign supreme and prevail over other religions. Allah’s favor upon the Muslims is manifest in the fact that He granted them true guidance, support and honor in this world and in the Hereafter. He has also chosen for them Islam as their religion because it is the Truth, and it is for this reason that He will not accept any other religion but Islam.

The Quran says (what means): "And whoever seeks a religion other than Islam, it shall not be accepted from him, and in the life to come he shall be among the losers.” [Quran 3:85].

Islam gives its followers happiness in this world and eternal bliss in the life to come. Islam simply means total submission to the Will of Allah. Therefore, it is the same in essence, whether given to Nooh (Noah), Ibraaheem (Abraham), Moosaa (Moses), 'Eesaa (Jesus), may Allah exalt their mention, or to Muhammad

. For the message it calls to is the same, and the source of unity is the revelation from Allah (which means): "He has ordained for you the same religion (Islam) which He enjoined on Noah, and that which We have revealed to you, and which We enjoined on Abraham, Moses and Jesus: namely that you should remain steadfast in religion and be not divided therein.” [Quran 42:13]

After the corruption of the older Scriptures, the Quran came with a twofold purpose -- to confirm the true and original message of Islam, and to stand as a witness to it, by confirming the truth and rejecting the falsehood, which over time came into the older Scriptures. Muslims are required to believe in the revealed Scriptures and to make no distinction between any of them, or the Messengers who brought them, may Allah exalt their mention, because they all come from the One True God.

These Scriptures have not been retained in their original form, due to the human omissions and additions that have crept into them. The Quran is the only Divine Scripture, which has stood the test of time without any change, because it is the Truth from God (Allah), and the Truth never fades or diminishes. The Quran says (what means): "That which We have revealed to you (O Muhammad) of the Book (i.e., the Quran) is the Truth, confirming that which was (revealed) before it.” [Quran 35:31]

The Truth contained in the Quran will never be compromised because Allah has taken upon Himself the responsibility of preserving it, as stated in the Quran (which means): "Verily We have sent the Reminder (i.e., the Quran), and We will assuredly guard it (from corruption).” [Quran 15:9]


(Arabic) and taught to millions of people around the world. In fact, with every succeeding generation of Muslims, the number of those who have committed the entire Quran to memory has increased. There is no other book, religious or otherwise, which has been given this unparalleled care in recorded history.

The care with which the unadulterated teachings of Islam have been authentically recorded and preserved throughout the ages, is a clear evidence of the universality of the message of Islam and the finality of the prophethood of Prophet Muhammad

That is why Allah Says in the Quran (what means):  "Verily the only acceptable religion to Allah is Islam." [Quran 3:19]

Oneness of the Lord

Islam calls to the belief that the Creator of the universe is One and Unique without any partners. His nature is so sublime that it is far beyond our limited conceptions. He is not a mere abstract of philosophy. All the creatures testify to His Existence, and none is comparable to Him. The unity of design and the fundamental facts of creation and existence of the universe proclaim His Oneness.

He is Eternal, without beginning or end, the Absolute, Who is not limited by time or place or circumstance. He is the Creator, the Sustainer and the Planner of the whole universe. None has the right to be worshipped except Him. He has the most Beautiful Names and the Loftiest Attributes. His Knowledge extends to everything seen and unseen, present and future, near and far. His Grace and Mercy are unbounded. He is the All Mighty, the All Wise.

And also (what means): "There is nothing whatever like unto Him, and He is the All-Hearing, the All-Seeing.” [Quran 42:11]

And also (what means): "And they attribute falsely without knowledge sons and daughters to Him. Be He Glorified! (For He is) above what they attribute to Him! He is the Originator of the heavens and the earth. How can He have a son when He has no wife? He created all things, and He has full knowledge of everything. Such is Allah, your Lord! None has the right to be worshipped but He, the Creator of all things. So worship Him (Alone). And He has the power to dispose of all affairs. No vision can grasp Him, but His Grasp is over all vision. He is the Most Subtle, Well-Aware.”  [Quran 6:100-103]

Tawheed, or monotheism, constitutes the essence of the teachings of Islam. It signifies that there is One Supreme Lord of the universe. He is Omnipotent and the Sustainer of the world and humankind. Unity pervades the whole universe. All of Allah's creatures testify to His Oneness. This can be seen in their complete submission to His Will.

The perpetual succession of day and night in the most orderly manner; the fixed course of the sun and the moon; the mighty stars; the ceaseless alternation of the seasons -- the functioning of the whole universe including its most subtle elements in a most precise and systematic manner tell us about the Wisdom, Power, Greatness and Divine skill of this Great Creator, Who is Allah.