The Muslim nation has a universal message for mankind 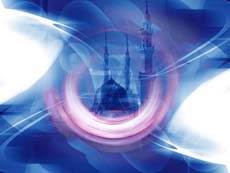 If as a researcher, I were to compare the men of yesterday and today whose prejudices have scarred the very core of religion, then I am overwhelmingly inclined to convict the latter. This is because their attitudes and prejudices do not merely affect them personally, but threaten to undermine and devastate the future of humankind.

Racism and discrimination can be driving forces which lead people to hatred and closed-mindedness – two sentiments that contradict all Allah-given values.

The force of destruction – if it can be thus described – of distorting or misinterpreting the role of religion, may result in religious indifference, or in the reduction of the social and moral relevance of religion.

Correcting the understanding of civilization is man's first step towards acknowledging the multiplicity of civilizations and the variety of cultures, which are prerequisites to achieving peaceful coexistence with people of other nations.

Man must understand that civilization is the product of perseverance. It is the fruit of creativity, that survives the challenges and demands of time and place. Man must learn to use the scales of justice granted to him and to recognize that his civilization and cultural heritage carry at their core a sublime message, which he must follow – positively or negatively – as he pleases.

Allah Almighty Says in the glorious Quran (what means): {We sent aforetime our Messengers with clear signs and sent down with them The Book and the Balance (of Right and Wrong), that men may stand forth in justice} [Quran 60: 25]

“Civilization is prompted with the incentive of religious belief. Thus in every civilization we must search for the religious origins.”

Ironically, is not the Christianity of today's liberal West that self-same Christianity which was attacked and hounded by 'enlightened' Western thinkers centuries ago? This is the very question we address to the representatives of the Christian faith who await any opportunity to attack Islam and the Muslim world.

If we were to examine the symbols of contemporary Christian thought used in any of its assaults on other cultures, we would find it a cross between secularism on one hand, and a collection of isolated philosophical, social, and religious values on the other.

Not surprisingly, the two are in no way related. The causal observer need exert very little effort to reach the conclusion that Western civilization, despite its haughtiness and tyranny, and its economic and material dominance in the world, is actually in a state of deadlock.

Western man is in need of direction and a definition of his very essence. It is in this arena that the Muslim nation can play a very important role.

The Muslim Ummah (nation) carries a universal and final message to all of humankind, and therefore, it must be present in any age to take part positively in civilization. Many questions are asked concerning the standpoint Muslims are taking towards globalization. Do we, as a nation, accept or reject the concept? Do we feel positive or negative about it? In fact, these questions are illogical for two reasons:

Firstly, the Muslim Ummah is responsible for bearing the message of Islam to humanity and for bearing witness to Allah's word. This can only be achieved by laying down a paragon of excellence using the Divine code conveyed in the Holy Quran.

It is a code that touches family life, society and civilized conduct. Failure to set a good example in life and society is to fall short in doing one's duty and faithfully spreading the truth. If this is the case with a small minority of Muslims worldwide, it is inconceivable that the entire Ummah who read Allah's divinely protected book and know His truth would behave so irresponsibly.

Hence, however powerful the West may be within the framework of globalization, and however influential its modern culture is, it is still impossible for it to append the Muslim world as part of its own civilization.

Secondly, in our day and age, choosing to be negative and passive, or blindly refusing to make any choice whatsoever, are both impossible attitudes to maintain. Distances have shrunk and barriers have been stripped away, making the world a much smaller place.

There is now no way for us to seclude ourselves closing our eyes and ears to the outside world. In any case, such an attitude goes against the true spirit of Islamic teachings and civilization, and the universality of its message.

Thus, the true believing Muslim who upholds the ageless banner of his civilization must interact with his peers and surroundings. There must be between him and members of other cultures the type of exchange that allows for better understanding and appreciation.

He should reach out to others through Da'wah, the call to Islam, setting a good example, establishing justice, and discussing all issues with wisdom and forbearance.
It is my opinion that while the vast Muslim masses should focus on setting good examples, the role of discourse and major discussions should be the call of Muslim scholars, thinkers and intellectuals who are capable of fulfilling this role and bearing the responsibility of such an obligation.

The history of our Islamic civilization has passed down a glorious heritage and a wealth of unique achievements by which we should feel honored. We must seek inspiration from our great past and borrow some of its dazzling accomplishments according to the spirit of the present age, in order to cooperate and better interact with other cultures in goodness and righteousness.

states: “Coming closer and developing a better understanding of other cultures requires co-operation in order to uphold truth and virtue, put down falsehood and administer co-operation so that people from every part of the earth may unite to protect and support the weak everywhere, and to prevent tyranny and oppression from corrupting humanity.”