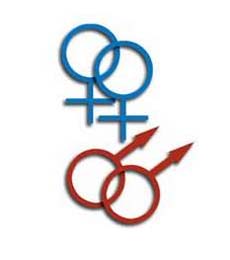 Homosexuality and lesbianism have been dubbed 'alternative life-styles', 'personal preference', 'natural variation', etc. In the West today, where homosexuality was once considered an illness by the Association of Psychiatrists, it has now been removed from the list and replaced by homophobia (the dislike of homosexuals and homosexuality). Consequently, Islam and Muslims are considered intolerant and biased due to their continued opposition. Arguments in favour of tolerance towards homosexuals are based on the assumption that homosexual behaviour is biologically based and not merely learned from society.

1.      Early opposition to homosexuality was based on the argument that such behaviour was unnatural. Sodomy cannot produce children, which is one of the main natural consequences of sexual relations. 'Mother Nature' did not make us that way, it was argued. To counter such arguments, homosexual researchers scoured the earth until they found supposed homosexual behaviour among the animal kingdom. They found that the males of some species of exotic fishes off the coast of imitated the behaviour of females of the species in order to prevent other males from impregnating their mates, and some rare butterflies from islands off the coast of also had males exhibiting female behaviour during mating season, etc. However, if the animal kingdom is to be used to justify human behaviour, there also exists a spider in whose female is much larger than the male. When mating is complete, the female eats her mate.

2.      During the 1980’s it was claimed that a gland in the base of the brain which is small in women and large in men was found to be small among homosexuals. However, this evidence, while seeming incontrovertible to the layman, was immediately refuted by scientists. The data was taken from cross-sections of the brains of dead adult humans whose sexual preference was identified prior to death. Consequently, the reduced size of that gland among homosexuals could have been a result of the practice and not its cause. That is, they could have been born with normal-sized glands which then became small due to their deviant lifestyle.

3.      Recently, genetics has become the most commonly used foundation for the pro-gay argument. In 1993 Dr. Dean Hamer, a researcher at the National Cancer Institute, claimed to have discovered 'the first concrete evidence that ‘gay genes’ really do exist.' Homosexual orientation was supposedly transmitted to males on the X chromosome from the mother. Hamer’s findings, published in the prestigious journal 'Science', transformed his colourless career as a government scientist into a dynamic media personality and he penned his memoirs. He gave expert testimony to the Colorado Supreme Court that formed the basis of the victorious decision striking down anti-gay propositions. However, a replication of his study at the failed to find any linkage whatsoever between the X chromosome and sexual orientation. It was also found that Hamer’s study lacked a control group; a fundamental principle of scientific research.

Furthermore, in June 1994, the Chicago Tribune reported that a junior researcher in Hamer’s laboratory who assisted in the gene mapping in the homosexuality study, alleged that he selectively reported his data. She was then summarily dismissed from her post-doctoral fellowship in Hamer’s lab. But a National Institute of Health investigation substantiated her claims and gave her another position in a different lab. Though Dr. Hamer was coy about his own sexuality in his memoirs, he later admitted in his lectures that he was gay.

4.      It should be noted that Islam, in its final form, did not introduce anti-gay legislature to the world. The texts of the Torah are replete with clear condemnations of such practices.

5.      The consequence of AIDS is enough to prove that homosexuality is evil and dangerous to society. The early spread of AIDS was concentrated among the homosexual community. It later spread to the heterosexual and the so-called bisexual community through blood transfusions and intravenous drug usage. Its spread continues on a rampage among promiscuous heterosexuals.

6.      Islam considers homosexuality to be the result of a choice. It is inconceivable that God made people homosexuals then declared it a crime and prescribed punishments for it in both this life and the next. To accept such a proposition is to accept that God is unjust. Inclinations can exist within humans for a variety of natural and unnatural acts, from fornication to rape and from necrophilia to bestiality. These inclinations may come from jinn-suggestions, media influence, or even from human whisperings or direct contact. Sodomy was common among the people of Prophet Loot (Lot), may Allah exalt his mention, who lived in Sodom, Palestine; after they had rejected his advice to give up this evil practice, Allah Almighty crushed and then annihilated their city. The Quran describes that punishment in the verse which means: "So when Our commandment came, We made the highest part [of the city] its lowest and rained upon them stones of hard clay in succession." [Quran: 11:82]

Human beings are not like robots who only do what they are programmed to. Humans choose and God holds them responsible for their choices. Were homosexuality a product of genetic destiny, it would be unfair for God to criminalise it and punish those who practice it. Currently, some scientists are even claiming that murder is of genetic origin. To accept that would mean to excuse murderers and tolerate murder.

7.      Islam instructs parents to separate their children in their beds by the age of ten in order to avoid sexual experiences which may result from childhood experimentation. Such experiences may be reinforced by contacts in schools and through abuse from adults. Also, the distinctions between male and female are strongly made in Islamic teachings.