The story of Prophet Loot 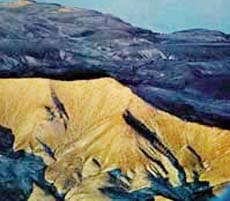 This city was filled with evil. Its residents waylaid, robbed and killed travellers. Another common evil among them was that their men used to have sex with men instead of women. This unnatural act later became known as sodomy, after the city of . It was practiced openly and unashamedly.

It was at the height of these crimes and sins that Allah revealed to Prophet Luut, may Allah exalt his mention, that he should summon the people to give up their indecent behaviour, but their immoral habits were so deeply ingrained that they were deaf to Luut's preaching. Addicted to their unnatural desires, they refused to accept the call to repentance, even when Luut, may Allah exalt his mention, warned them of Allah's punishment. Instead, they threatened to drive him out of the city if he continued preaching against their evil habits.

Allah Almighty revealed (what means): "The people of Luut denied the messengers. When their brother Luut said to them: 'Will you not fear Allah? Indeed, I am to you a trustworthy messenger. So fear Allah and obey me. And I do not ask you for it any payment. My payment is only from the Lord of the worlds. Do you approach males among the worlds. And leave what your Lord has created for you as mates? But you are a people transgressing.' They said: 'If you do not desist, O Luut, you will surely be of those evicted.' He said: 'Indeed, I am, toward your deed, of those who detest [it]. My Lord! Save me and my family from [the consequence of] what they do.' So We saved him and his family, all. Except an old woman [i.e., the wife of Luut] among those who remained behind." [Quran: 26:160-171]

The sinful actions of Prophet Luut's people saddened his heart. Their abominable reputation spread throughout the land, while he continued to struggle against them. As the years passed, he persisted in his mission, but to no avail. No one responded to his call and believed except for the members of his family; even in his household, not all the members believed: Luut's wife was a disbeliever.

If home is the place of comfort and rest, then Luut, may Allah exalt his mention, found none, for he was tormented both within and outside his home. His life was continuous agony as he suffered greatly, but he remained patient and steadfast as a Messenger to his people. Instead of heeding to him, they belittled his message, and mockingly challenged him, saying (what means): "…'Bring us the punishment of Allah, if you should be of the truthful!" [Quran: 29:29]

Overwhelmed with despair, Luut, may Allah exalt his mention, prayed to Allah to grant him victory and to destroy the corrupt. Allah Almighty, therefore, sent three angels in the guise of young handsome men in answer to his prayer. They reached the walls of the town in the afternoon. The first person who caught sight of them was Luut's daughter while she was filling her jug with water from the river. When she saw them, she was stunned that there could be men of such magnificent beauty on earth.

One of the three men (angels) asked her: "O maiden! Is there a place to rest?"

Remembering the evil character of her people, she replied: "Stay here and do not enter the town until I inform my father and return." Leaving her jug by the river, she swiftly ran home.

"O father!" she cried. "You are wanted by young men at the town gate and I have never before seen the like of their faces!"

Luut, may Allah exalt his mention, felt distressed as he quickly ran to his guests.

They visited him at home as guests. After ushering them in hospitably, he asked them where they came from and where they were going.

They did not reply to his questions. Instead they asked if he could host them. He began talking with them and impressed upon them the repulsive nature of his people. Luut, may Allah exalt his mention, was filled with turmoil; he wanted to convince his guests without offending them, not to spend the night there, yet at the same time he wanted to extend to them the expected hospitality normally accorded to guests. In vain, he tried to make them understand the perilous situation. At last, therefore, he requested them to wait until nightfall, for then no one would see them.

When darkness shrouded the town, Luut, may Allah exalt his mention, escorted his guests to his home. No one was aware of their presence. However, as soon as Luut's wife saw them, she slipped out of the house quietly so that no one noticed her. Quickly, she ran to her people with the news and spread it to all the inhabitants like wildfire. The people rushed towards Luut, may Allah exalt his mention, quickly and excitedly.

When Luut, may Allah exalt his mention, saw the mob approaching his house, he shut the door, but they kept on banging on it. He pleaded with them to leave the visitors alone and fear Allah's punishment. He urged them to seek sexual fulfilment with their wives, for that is what Allah had made lawful.

Luut's people waited until he had finished his short sermon, and then they roared with laughter. Blinded by lust, they broke down the door. Luut, may Allah exalt his mention, became very angry, but he stood powerless before these violent people. He felt powerless to prevent the abuse of his guests, but he firmly continued to plead with the mob.

At that terrible moment, he wished he had the power to push them away from his guests. Seeing him in a state of helplessness and grief, the guests said to him: "Do not be anxious or frightened, for we are angels, and these people will not harm you."

On hearing this, the mob was terrified and fled from Luut's house, hurling threats at him as they left. The angels warned Prophet Luut, may Allah exalt his mention, to leave his house before sunrise, taking with him all his family, except his wife.

Allah had decreed that the city of should perish. An earthquake rocked the town. It was as if a mighty power had lifted the entire city and flung it down in one jolt. A storm of stones then rained on the city. Everyone and everything was destroyed, including Luut's wife.

The Holy Quran recorded this event; it states (what means): "So We saved him and his family, all. Except an old woman [his wife] among those who remained behind. Then We destroyed the others. And We rained upon them a rain [of stones], and evil was the rain of those who were warned. Indeed in that is a sign, but most of them were not to be believers. And indeed, your Lord – He is the Exalted in Might, the Merciful." [Quran: 26:170-175]

Thus, the people of Luut, may Allah exalt his mention, were destroyed and their towns and names have been erased from the face of the earth.