The Quran is the Delight of the Heart 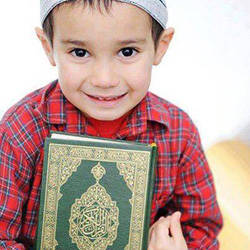 Allah, the Exalted, revealed the Quran, to be a beacon of light that cannot be extinguished. It is a methodology and way of life that is perfect in all respects. In it is strength that cannot be equalled or repelled. It is the foundation of Eeman (Faith) and the spring of knowledge. Allah willed that the Quran be what quenches the thirst for knowledge. It is the delight of the people of wisdom. The Quran is the greatest cure for all ailments. It is Allah's Rope that cannot be severed. It is the Wise Reminder and the true Straight Path.

In the Quran are the parables of those who were before us, a prophesy of that which will be after us and a criterion to judge between us. It is Truth with certainty that was revealed to us. The one who lives according to its dictations will be rewarded. The one who judges according to it will be just. The one who calls to it is on the Straight Path. Allah raises and lowers people's status based on their adherence to it. The Quran, on the Day of Judgment, will intercede on behalf of those who recited it.

The Book of Allah for the guidance of mankind is like the soul in relation to the body. Therefore, he who abandons its recitation and does not act in accordance to its laws is in a state of spiritual death. Allah Almighty Says (what means): "And is one who was dead and We gave him life and made for him light by which to walk among the people like one who is in darkness, never to emerge there from?" [Quran 6:122]
A person without Quran is like a person without water, air and medicine. Allah, the Most Exalted, Says (what means): "And We send down of the Quran, that which is healing and mercy for the believers, but it does not increase the wrongdoers except in loss." [Quran 17:82]

The Quran is a healing for the body and the soul. Whenever life becomes hard and complicated, the Light of the Quran will always brighten the way. It will be a source of solace and tranquillity. It will be a defender to you when you are powerless and in need. When the Muslim recites the Quran, he will feel matchless tranquillity in his heart and being. This causes him only to fear Allah alone.
Allah Almighty Says (what means): "Those to whom people [i.e. hypocrites] said, 'Indeed, the people have gathered against you, so fear them.' But it [merely] increased them in faith, and they said, 'Sufficient for us is Allah, and [He is] the best Disposer of affairs.' So they returned with favor from Allah and bounty, no harm having touched them. And they pursued the pleasure of Allah, and Allah is the Possessor of great bounty. That is only Satan who frightens [you] of his supporters. So fear them not, but fear Me, if you are [indeed] believers." [Quran 3:173-175]

Sadly, many have not taken this Quran into consideration and have neglected its recitation and implementation. They sought the worldly life and neglected the Hereafter. Allah Says (what means): "And if you obey most of those upon the earth, they will mislead you from the way of Allah. They follow not except assumption, and they are not but falsifying." [Quran 6:116]

Tragically, there are those who recite the Quran in its entirety and finish with little more than with what they began with in terms of contemplation and action. Some are so concerned with how they sound, they beautify their voice without ever listening to what is being ordered or prohibited. Truly, there are many reciters of the Quran that the Quran is free from them and their evil. They recite the Quran and are oppressive to themselves and others by not following its orders or forbidding its prohibitions.

Nothing is more valuable to a Muslim in his worldly life and in the Hereafter than reciting the Quran and reflecting and trying to comprehend its meaning. In doing so, an individual will become acquainted with what is good and what is evil. He will see the effects of disobedience of Allah and its punishment in the parables of those who have come before us. An example of such a punishment is the flood that was sent upon the people of Nooh (Noah) may Allah exalt his mention and others similar to it. It is a source of inspiration and it strengthens one's belief in Allah. For this reason, Allah Says (what means): "…And when His (Allah's) verses (Quran) are recited to them, it increases them in faith; and upon their Lord they rely." [Quran 8:2]

This Book was sent and revealed from above the seven Heavens so that it could be comprehended and implemented; it is not just to be recited while the heart is pre-occupied. Allah, Almighty, Says (what means):
"This is a blessed Book which We have revealed to you, [O Muhammad, sallAllahu alaihi wa sallam], that they might reflect upon its verses and that those of understanding would be reminded." [Quran 38:29]

What has happened to our hearts? Why are our hearts locked out and unresponsive to the Quran? Why do the words of the Quran enter from one ear and exit from the other ear? Why have our hearts hardened? Let us comprehend the Quran and implement it in our lives. Let us be from those who implement the Quran in our days and recite it during our nights.