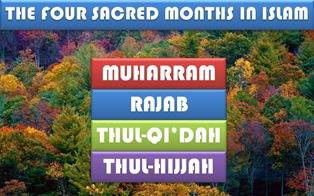 Allah Almighty Says (what means): {Indeed, the number of months with Allah is twelve (lunar) months in the register of Allah (from) the day He created the heavens and the earth; of these, four are sacred. That is the correct religion (i.e. way), so do not wrong yourselves during them. And fight against the disbelievers collectively as they fight against you collectively. And know that Allah is with the righteous (who fear Him)} [Quran 9: 36]

The words in the above mentioned verse (what means) {He created the Heavens and earth…} [Quran 9: 36] are to clarify that the decree of Allah took place very early on, and that He set the months, named them and sequenced them when He created the Heavens and the earth, then He revealed this upon His Prophets within the divined Books.
The verse is informing us that the ruling of these months will remain (names, sequence and sacredness), and the changes made by the disbelievers to the sequence would have no effect. Moreover, whatever the disbelievers had changed could not change what Allah had decreed.

They are: Thul-Qi’dah, Thul-Hijjah, Muharram, and Rajab which is between Jumaadaa Al-Aakhirah and Sah’baan. It was also called Rajab of Mudhar, because the tribe of Mudhar used to adhere to its sacredness, while another tribe by the name of Rabee’ah Ibn Nizar used to change sacredness of Rajab to Ramadan. In order to lift this confusion the Prophet

said: “Rajab, which comes between Jumada and Sah’ban”.

Allah Says in the same verse (which means): {…that is the right religion} meaning, this Sharee’ah (Islamic law) and obedience therein, is the right and straight path. Then Allah Continues His words (what means): {Do not wrong (oppress) yourselves therein} [Quran 9: 36] which is referring to all months of the year but the sacred months hold a special position which makes oppressing oneself greater, just as Allah Says (what means): {no sexual relation (with spouse), no sinning, nor unjust dispute} [Quran 9: 36] and this certainly does not indicate that one can sin other than the time of Hajj but it is to reflect the greatness of sinning during its rituals.

Do not wrong (oppress) yourselves by fighting and committing sins, because when Allah honors something for one reason, it becomes that much honored, but when He honors for two or more reasons, then sacredness becomes more, and punishment for disobedience is multiplied accordingly. For example, one who obeys Allah during the sacred months in the sacred area will receive more reward than obeying Allah during other months, and the one who obeys Allah during months other than the sacred months outside the sacred area will receive less reward than he who obeys Allah inside the sacred area. Allah gave an indication to this His Saying (what means): {O wives of the Prophet, whoever of you should commit a clear immorality – for her the punishment will be doubled two fold, and ever is that for Allah, easy.} [Quran 33:30]