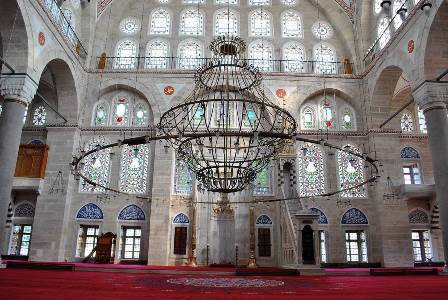 For eight centuries, the conquest of Constantinople, now was a dream for the Muslim commanders. Ever since the era of the revered companion, Mu'awiyah Ibn Abu Sufyan, there had been many attempts to conquer it, but none had succeeded.

Who was then the person about whom the Prophet

as a child and his excellent preparation:

Muhammad Al-Fatih was born on 27th  Rajab, 835 A.H.,  30th  March, 1432. He was brought up under the supervision of his father, Sultan Murad II, the seventh Ottoman Sultan. His father prepared and trained him to shoulder the responsibilities of the position of a Sultan. Muhammad Al-Fatih memorized all the Quran, learnt the Prophetic narrations, Islamic jurisprudence, mathematics, astronomy and the skills and tactics required for an ideal warrior.

He also learnt Arabic, Persian, Latin and Greek languages. He joined his father in his battles and conquests.

His father appointed him as a ruler of a small emirate so that he could receive practical training on administering state affairs under the supervision of some of the top scholars of that time. This matter influenced the character of the young prince and tinted his personality with Islamic morals and manners.

Shaykh Aaq Shamsuddeen, one of the scholars who supervised the upbringing and education of Muhammad Al-Fatih, managed to inculcate in his heart the spirit of Jihad (efforts for the cause of Allah) and the desire to be a person with high ambition.

that he may be the one referred to in the Prophetic narration mentioned above. All this shaped the character of Muhammad Al-Fatih. He was devoted to Jihad, highly ambitious, widely cultured, and had deep knowledge of the skills of war and combat.

Taking power and his efforts to achieve the glad tiding:

took over and became the Sultan of the . He was a strong young man, only twenty years old, very enthusiastic and ambitious. He was thinking of the conquest of Constantinople, the capital of the . This dream overwhelmed him to the extent that he would not talk about any subject except for the conquest of . He would not even allow anyone who was sitting with him to talk, except about the expected conquest.

The first step in achieving his dream was to take control of the of so that he could prevent any support or supplies that might come to Constantinople from . So he built a huge castle on the European seashore of the . Along with top senior officials, he personally participated in building the castle. It took three months to build this castle that came to be known as the Roman Castle. On the other bank of the of there was the . After these new arrangements made by Muhammad Al-Fatih

it was impossible any ship to cross the strait without the consent of Ottoman force.

At that time, a talented engineer managed to make a number of cannons for Sultan, Muhammad Al-Fatih

. One of these cannons, never known before that time, was 700 tons and its projectile weighed 1,500 kilograms.

The conquest of and the realization of the glad tidings:

marched to with an army of two hundred and sixty-five thousand fighters. This army had infantry forces as well as horsemen. Huge cannons supported this army. The army besieged and the Ottoman cannons started to fire their missiles at the fortified walls of the city day and night. From time to time, the Sultan surprised the enemy with a new war plan until the city defenders lost control and their forces gave up.

At dawn of Tuesday, 20th Jumada Al-Awwal, 827 A.H.,  29th May, 1453 A.C., the Ottoman forces managed to penetrate the walls and drive away the defenders who fled. The people of were taken by surprise when they saw the Ottoman flags waving on their walls and the soldiers flooding into the city.

After the Ottoman forces conquered the city, Sultan Muhammad

arrived on his horse in a great procession that included his ministers and army commanders. Ever since that time, the Sultan was known as Muhammad Al-Fatih (the Conqueror). The soldiers were shouting:

The Sultan's procession marched until it reached Hagia Sophia church where the people of the city had gathered. When they knew that the Sultan had arrived, they bowed and prostrated and they were all weeping and crying because they did not know their fate; what Sultan Muhammad Al-Fatih

would do to them.

centuries ago. After that the Sultan addressed the people of Constantinople who still bowing and prostrating in tears.

Stand up! I am Sultan Muhammad and I would like to tell you, your brothers, and all the people present that your lives and freedoms are protected.

The Sultan ordered that the church be turned into a mosque and for the first time, the call for prayer was heard from this place. Until now, this mosque is still known as the Mosque of Hagia Sophia. He also decided to take as a capital of his country. It was called Islambul, meaning the House of Islam. Later on the word was viciously twisted to become .

The Sultan was very tolerant and merciful with the people of the city, and acted according to the teachings of Islam. He commanded his soldiers to treat their prisoners of war in a good manner. The Sultan himself paid the ransoms for a large number of prisoners of war from his own money. He also allowed those who left the city when it was under siege to return home.

The aftermath of the conquest of :

attained this victory when he was twenty three years old. This indicated his early military genius. He also deserved the glad tidings of the Prophet

who foretold that a good person would conquer that city.

headed to complete his conquests in the Balkan. He managed to conquer and Bosnia Herzegovina. He also looked forward to conquering so that he would have another source of pride in addition to the conquest of .

In order to achieve this great hope, he needed to conquer . He prepared a tremendous fleet for this mission. He managed to land his forces and a large number of cannons near the Italian city Otarant. Consequently he managed to capture its castle in Jumada Al-Awwal 885 A.H., July 1480 A.C.

Muhammad Al-Fatih, may Allah have mercy on him, decided to take Otarant as a base for his northern military operations until he could reach . The European world was terrified because of this attempt and they expected the fall of the historical city, into the hands of Muhammad Al-Fatih

. However, he died suddenly (on  4th  Rabee' Al-Awwal, 886 A.H.,  3rd  May, 1481 A.C.) while he was preparing to realize this dream. All was very happy when they knew about his death. The Pope of Rome ordered that thankfulness prayer be held in churches as a means of expressing joy and happiness over the news.

as a statesman and a sponsor of civilization

During the reign of Muhammad Al-Fatih and because of his wise leadership and well-planned policy, the reached boundaries that it had never done before.

. Through the help of some of his loyal men, he managed to establish a constitution based on the Book of Allah and the Sunnah of His Prophet

and the Ottoman State adhered to this constitution for about four centuries.

Although he was very busy, he managed to establish more than 300 mosques, 192 of which were in alone. He also built 57 schools. Among his most famous architectural monuments are the Mosque of Sultan Muhammad, the Mosque of Abu Ayyoob Al-Ansari, and .

was known for his love for literature. He was a good poet and a regular reader. He liked the company of scholars and poets and made some of them ministers. Whenever he heard about a great scholar in any field, he would help and support him or ask him to come to in order to benefit of his knowledge.

The character of Muhammad Al-Fatih

was a committed Muslim who abode by the rulings of Islamic jurisprudence. Because of the way he was brought up, he was a pious man. As for his military conduct, it was very civilized and it was unfamiliar to in its Medieval Ages.

Owing to his ambition fostered by his teachers who always encouraged him to be the conqueror of he managed to make the greatest of his achievements by conquering this city.

managed to realize his dreams through hard work, continuous efforts, and well-organized planning. For example, before besieging he prepared for the war by making cannons, preparing his fleet, and making use of all the factors that might render him victorious.

Through high ambition, determination, and the effort to achieve his goals, he managed to materialize his dream, make his hope an existing reality which made him one of the great Muslim heroes and conquerors.