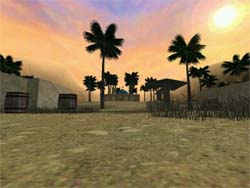 joined the Muslim army in the battle of Uhud, he left in Madeenah his son Jabir to take care of the family. Abdullaah

had many daughters; he ordered his only son to take care of them, and did not allow him to join the fighters. The Muslims returned defeated from that and lost a great number of men. Abdullah Ibn 'Amr

was among the martyred.

was saddened by the news of his father's death. He was a young man who did not reach twenty years of age. He was at a loss as to how to care for his sisters, and in addition pay back his father's debts. He felt overburdened under this sudden responsibility. His worries did not go unnoticed by the Prophet

replied: "My father was slain in Uhud (Battle of Uhud) and he left behind many children, and a large debt." The Prophet

comforted him by telling him that his father was among the martyrs and recited to him Allah's Words (which means): {And never think of those who have been killed in the cause of Allah as dead. Rather, they are alive with their Lord, receiving provision, …" [Quran 3:169]. His heart lightened when he heard these verses.

married a widow who was older than him, though he was a young man and could have married a young virgin, but he wisely thought that she could better help him raise his younger sisters. His worries were not over, for he still had to fulfill his father's debt, especially that the creditors were knocking incessantly at his door and would not give him more time. His father left no wealth except a small palm grove; which would yield barely enough fruits to feed them. He thought that he would ask the Prophet's help for he

never refused to help him. Jabir

said to the Prophet, sallal: "O Messenger of Allah

people are knocking at my door asking me to pay my father's debt, but he left only a small palm grove and the fruits of which will not fulfill even a part of the debt. Would you please come with me so that the creditors would not be harsh to me?" He

said: "I will come soon, during the middle of the day. Go now and sort your dates."

as he was sitting in his garden sorting his dates. He asked them to wait for the Prophet

who promised to assist him. Now when they heard the Prophet's name mentioned, people refrained from talking, except for one Jew who refused to wait even a moment, saying: "I have nothing to do with Muhammad. Pay me right now!" As the sun approached the zenith, they saw the Prophet

coming hurriedly, sweat dripping from his forehead. He asked the Jew: "Would you accept a part of the debt to be paid to you now and postpone the rest for next year?" "Never," he said, and he tried to present different excuses. The Prophet

walked around the piled dates and invoked Allah's blessing. Then he

stayed for a while then left. As for Jabir

he kept measuring the dates to his creditors until he fulfilled all the debts his father owed, and to his great amazement the piles of dates were still so high as if he did not take anything from them! He could barely believe his eyes.

returned home and related what has happened to his wife. "Allah has fulfilled my father's debt. I would have been very content if I would have paid all the debt and not a single date remained for us, but by Allah's grace, we still have most of our harvest!"

had missed many battles because his father would order him to take care of his sisters while he was with the fighters. But after his father's death he had not missed any occasion to fulfill his duty of Jihad. One of the expeditions was especially dear to him, for a memorable event happened to him with the Prophet

which he never tired to tell again and again. They were returning from the battle of Thatur-Riqaa' near the area of Najd. The Prophet

stopped for some time and lagged behind. While he

was hastening his mount to reach his companions, he saw Jabir

on his red camel at the end of the convoy. The camel was trotting slowly, and Jabir

was hitting it vigorously with a stick, but it refused to speed up. "What is wrong, Jabir?" asked the Prophet

. "My camel is so slow I am lagging behind." Said Jabir

. "Give me the stick and hold on to your mount." The Prophet

hit the camel lightly with the stick, and as soon as he

did, it sprang and run as if a new life was given to it. Jabir

reached the head of the convoy, under the incredulous eyes of his friends who asked him what has happened to his camel. The sight of Jabir

who could barely hold himself on his camel who was outpacing all the other camels, amused the Prophet

asked him. "In the best condition," he replied, "your blessing has reached it and I have never seen it run as fast as today." "Would you sell it to me?" asked the Prophet

said. "No but rather sell it to me." "I agree if you set the price," he said "Then I'll buy it for one Dirham!" said the Prophet

. "Do you give me much less than its value?" he said, "Then two Dirhams," but he refused. The Prophet

kept increasing the price until he offered to buy it for one oke (a unit of weight) of gold. Jabir

said: "I owe a man one oke of gold, so I will sell it to you and pay my debt." The Prophet

reached out to take hold of the camel, but Jabir

said: "O Messenger of Allah, I have a last condition: that you let me ride it until we reach Madeenah." He

smiled and said: "You may ride it until Madeenah." He rode alongside the Prophet

holding the camel's reins to slow it down, while the Prophet

The next day when they reached Madeenah, Jabir

went to the Prophet's mosque to hand him over his camel. When he saw the camel, the Prophet

smiled and held it by its reins and walked around with it saying: "So the camel is ours." Then he

: "Give him one oke of gold and then some more." Jabir

left the mosque quiet content with the deal, looking forward to bring the news to his wife, when he heard someone calling him: "The Messenger of Allah

wants you back." He

said to himself: "I hope the Messenger of Allah

is happy with his camel." When the Prophet

and asked him: "Are you happy with the price?" "Yes, and may Allah reward you for the additional money." "Then take hold of your camel, it is yours," said the Prophet

. "How come, O Messenger of Allah, the camel is rightly yours, for I received its price!" "The money and the camel are yours," said the Prophet

on the shoulder and said: "Did you think that I bargained with you to take your camel away from you? It was not my intention!" Jabir

for his great generosity and his gentleness, and left home bursting with joy.

related what has happened to his wife. She laughed for a long time, then said: "I was expecting that from the Prophet

said: "I have felt the same way when the Prophet

was bargaining with me."

took great care of his camel for it became so dear to him after this event. The camel was at his service during the time of the Prophet

and the Caliph Abu Bakr

after him, and then when it got old the Caliph told him to let it graze with the flock of camels of charity and roam freely in the grazing lands.

That was the story of Jabir

and his camel, a story that highlights not only the camaraderie of the Prophet

with his companions, but also his great leniency and generosity, and the great love they had for him.