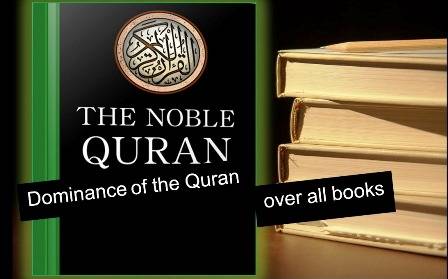 Allah, the Almighty, revealed the Quran to be His last, all-embracing Scripture containing the final manifestation of the Divine Law. This necessitates that it has to be safeguarded from the mischievous hands of men and from all corruption. This protection has been a reality from the time the Quran was revealed until today and will remain so forever. It contains no additions or deletions. It has reached us by so many chains of transmission that it is impossible for them to have conspired on a lie. It has been recorded and memorized innumerable times.

There has been no change in its text over time, not even in a single letter. Some of those who have committed it to memory cannot speak Arabic; nevertheless, they recite it exactly as it was revealed.
Allah has guaranteed the preservation of the Quranic text, as He, the Most Exalted, Says (what means):
"Indeed, it is We who sent down the Quran and indeed, We will be its guardian." [Quran 15:9]

"And the word of your Lord has been fulfilled in truth and in justice. None can alter His words, and He is the All-Hearing, the All-Knowing." [Quran 6: 115]

In the Quran, Allah the Almighty informs us that the Torah (Tawrat - The Divine revelation revealed to Moos (Moses)

for the people of Israel) was changed; He Says (what means):

Being the final, all-encompassing and preserved against any change, the Islamic Law abrogated all the previous Scriptures which sustained human interpolations. Abrogation generally takes place with regards to secondary matters of law. As for fundamental principles, like the Oneness of Allah, the Most Exalted, the prohibition of idolatry, and the fundamentals of worship – matters that form the basic call of all the Messengers, may Allah exalt their mention,  they are not subject to abrogation.
The Law that came with Prophet 'Eesa (Jesus)

abrogated part of the Law that came with Moosa

He, the Almighty, further challenged the disbelievers among the Arabs to produce even one chapter similar to the Quranic chapters. Allah Says (what means): "And if you are in doubt about what We have sent down upon Our Servant [Muhammad], then produce a chapter the like thereof and call upon your witnesses other than Allah, if you should be truthful." [Quran 2:23]

(3) Allah has taken it upon Himself to protect the Quran from alteration, to safeguard it from corruption, and to preserve it from distortion as stated in the meaning of Quran 15:9 {Indeed it is We who sent down....}. On the other hand, the previous Scriptures suffered alteration and distortion and did not remain in their originally revealed form (as mentioned above in [Quran 4:46]).