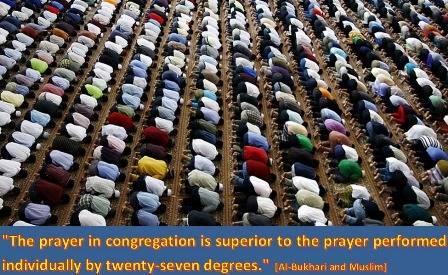 The virtues of the congregational prayer:

Performing the obligatory prayers in congregation is mandatory and required of every believing adult male who has no excuse for not doing so. Many authentic Hadeeths highlight the superiority and excellence of praying in congregation. Among these Hadeeths are:
The Prophet

said: "The prayer in congregation is superior to the prayer performed individually by twenty-seven degrees." [Al-Bukhari and Muslim]

also said: "The prayer of a man in congregation is twenty-five times more superior (in reward) to his prayer in his house or market - and this is because he performs ablution and perfects it and goes to the mosque with the sole purpose of performing the prayer. He does not take a step without being raised a degree and having one of his sins erased. When he prays, as long as he does not lose his ablution, the angels keep on supplicating [for him] 'O Allah, bless him. O Allah, have mercy upon him.' And he is considered in prayer as long as he is waiting for the prayer." [Al-Bukhari and Muslim]

To know the status of praying with the congregation and how serious a matter it is to abandon it, the Prophet

hardly exempted anyone from it. Abu Hurayrah

reported that a blind man said to the Prophet

: "O Messenger of Allah, I have no guide to lead me to the mosque (to attend the congregational prayer)." He asked the Prophet

for permission to pray in his house and the Prophet

permitted him. Then, when he turned to go, the Prophet

called him and said: ‘Do you hear the call to prayer?’ The blind man said ‘yes.’ The Prophet

then said: "Then respond to it [by coming to the mosque]!" [Muslim]

also reported that the Prophet

said: "I swear by Him in whose hand my soul is! I have considered ordering a fire to be kindled and then ask someone to lead the people in prayer. And then go to the men [who did not attend the prayer] and burn their houses over them." [Al-Bukhari and Muslim]

This was clearly understood by the Companions

and their words reflected it. 'Abdullah Ibn Mas'ood

said: "If anyone would like to meet Allah tomorrow as a Muslim, he should persevere in observing these five prayers (in congregation) whenever the call for them is made, for Allah has chosen for your Prophet

the way of right guidance. And the [five prayers in congregation] are part of this right guidance. If you were to pray them in your houses, as the one who stays behind in his house, you would be leaving a ‘Sunnah’ of your Prophet

. If you leave the ‘Sunnah’ of your Prophet

you would go astray. Verily, I have seen a time when no one abandoned them [the congregational prayers] except for the hypocrites who were well known for their hypocrisy. A man would be brought, supported by two people [due to his weakness or illness] until he was placed in a row (in the congregation)." [Muslim]

stressed the importance of praying in congregation under all circumstances. In one Hadeeth, he

said: “Any three people living in a village or in the desert who do not make Athan nor establish the prayer will be overwhelmed by Satan, so you have to establish congregational prayers, as the wolf eats only the sheep that strays from the herd." [Ahmad, An-Nasa'i, and Abu Dawood - Al-Albani graded it Hasan]

What is considered a congregation?

The least number required for the congregational prayer is two: the Imam (leader) and another one with him. The more the people, the more rewarding is the prayer. The Prophet

The Prayer is better to be performed in the mosque. The farther the mosque is, the better. Concerning this, the Prophet

said: “The people attaining the most reward are those who are farthest to walk (to the mosque).” [Muslim, Ahmad and Abu Dawood]

Who should be the Imam:

The congregational prayer is led by an Imam. The Imam should be male, just, and well aware of Islamic jurisprudence. The Imam stands in front by himself while the followers stand behind him in straight lines, all facing the Qiblah (the direction of Ka’bah). The most worthy of leading people in prayer is the one who is the best in memorizing and reciting the Quran. If they are equal, then the one who has the deepest knowledge of Sunnah. If they still are equal in the knowledge of Sunnah, then the oldest of the group. The Messenger of Allah

Concerning women, it is better and more rewarding for them to pray in their houses than to attend the congregational prayers. However, they may attend the congregational prayer in the mosque provided they are secure from any temptation. Also, they should avoid wearing or using any attractive or tempting adornment or perfume, and refrain from intermingling with men, as the Prophet

said: “Do not prevent the female slaves of Allah (i.e. women) from the mosques of Allah. They should go without wearing perfume. If she wears perfume, it is not lawful for her to attend the prayer in congregation in the mosque.” [Ahmad and Abu Dawood]

It is forbidden for a woman to lead a man in prayer. If a woman leads a man in prayer, his prayer is void and he has to make it up. This is a matter which is agreed upon among the jurists.