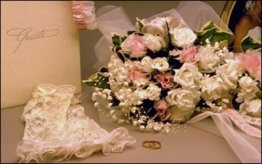 For a woman, the wedding day is one of the happiest and most exciting days of her life. The preparations, the guests and the festivities are all in anticipation of this very special event. At the same time, many women also experience a great deal of apprehension and anxiety, particularly as the wedding night approaches. Many are concerned about how it will be for them, what will happen, how their new husbands will treat them. It is an unknown experience that stirs up many emotions and concerns.

Islam is a religion that has maintained the special nature of the wedding and the wedding night, providing specific prescriptions for those events. Intimate relations between a man and a woman are only allowed within the marital bond, ensuring the uniqueness of that day and that relationship. It is important to recall that the union of man and woman is an innate occurrence and, because of that, it will come naturally. Allah Says (what means): “And We created you in pairs.” [Quran 78: 8]  Islam has regulated this relationship on the basis of wisdom and nature. Through marriage, the natural instinct is provided for within reasonable and appropriate limits. This prevents the disorder and disharmony that we see in societies where these limits are not in place. The Islamic prescriptions are the most beneficial for the human beings, as well as the society in regard to sexual and marital relations. The individual is able to fulfill his or her desires in a healthy and wholesome manner, while protecting the society from iniquity at the same time.

So, as couples unite, they should reflect upon the fact that they are fulfilling an important duty in Islam and will be rewarded accordingly. There is also a spiritual component to this union along with the other elements. This means that they will be accountable to Allah in all that they do in relation to this union. They are embarking on a new course in life, which will present new challenges and new joys. They will need to learn about each other – the other person’s needs, personality, temperament, and uniqueness. Patience will be needed since any match will not be perfect and there will most certainly be differences. This will be true regarding intimate matters as well, and this should be kept in mind as the couple begins their journey together on the first day of marriage. The couple should take time to get to know and understand one another and to discover the uniqueness and desires of their new life partner. This should be done in a gradual and sensitive manner. Each individual should be more concerned about the needs and wants of their partner, more so than his or her own self. This is a very delicate issue, especially for women who are generally more sensitive and emotional.

Mothers, sisters and friends who are experienced should assist in preparing the bride for the wedding night. They should be supportive and provide her with the necessary information. This will lessen her anxiety and make her feel comfortable knowing that other women have had similar experiences. All of this should be done, of course, without providing specific details of each individual’s experiences for this is a very personal matter. The discussion can be general and based upon the Quran and the Sunnah.

The following are some of the etiquette that should be considered in preparing for this special night. This information will also be valuable and useful throughout the marriage.

As the union for a man and a woman embodies an inherent spiritual component, the couple should remember Allah at this time. The husband should put his hand on his wife’s head and supplicate for her. The Prophet

Following this, the couple performs two Rak’ahs (units of prayer) together.

Before becoming intimate, the man should say, “Bismillaah, Allahumma jannibnaa ash-shaytaana wa jannibish-shaytaana ma razaqtana,” which means: “In the name of Allah, O Allah, ward off Satan from us and ward off from Satan what you grant us.” The Prophet

said: “Then, if Allah decrees that they should have a child, Satan will never harm him.” [Al-Bukhari] This should be said before each intimate act in order to protect the children who may be conceived.

Miswaak (tooth stick) –It is recommended for each partner to clean his or her teeth and mouth with Miswaak or a toothbrush. This will make it easier for them to come close to each other and enhance the relations. Shurayh Ibn Haani’

said: “I asked 'Aa'ishah, what the Prophet

would begin with when he entered his house and she, may Allah be pleased with her, said: ‘Cleaning his teeth.’” [Muslim]

Wudhoo’ (ablution) and Ghusl (ritual bathing) – after the couple have completed the sexual act and wish to repeat it, it is recommended to perform ablution before this. This is the Sunnah of the Prophet

as demonstrated in the following narration. The Messenger of Allah

said: “If one of you has gone to his wife and he wishes to repeat the act, he should (first) perform ablution.” [Muslim] After completion of intimacies, it is required for both spouses complete Ghusl (a ritual bath) before resuming prayer and other religious acts.

said: “Whoever has intercourse with a menstruating woman or with a woman through the anus has committed disbelief in what has been revealed to Muhammad.” [Ahmad and Abu Daawood] These acts are to be avoided because they are unnatural and they may lead to various physical, psychological, and interpersonal problems.

The union between a man and a woman is a special gift which has been given by Allah. It is one of the bounties of this life and, as such, it should be treated accordingly. It is a relationship that should be based upon love, compassion, and concern for the other. It is an act of charity for which Allah will reward both partners. The Prophet

said: “In having intercourse (with your wife) there is an act of charity (for which you shall be rewarded).” The companions, may Allah be pleased with them, said, “O Messenger of Allah, one of us fulfills his desires and he will be rewarded for that?” He

As the couple begin their life together as husband and wife, they should keep to these important principles and, Allah willing, Allah will reward them with a long and happy life together.