Etiquettes related to debt and loaning â€“ I 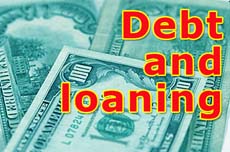 Some of these etiquettes regarding the creditor are to delay the debtor who is unable to pay on due time and to drop the debt from the needy. On the other hand, the debtor should rush and repay the loan as soon as he is able to and not to procrastinate repayment.

Giving respite to the debtor:

When the time of repayment is due, then the one who was kind to his brother and loaned him some money should remember the saying of Allah (which means): â€œAnd if someone is in hardship, then [let there be] postponement until [a time of] ease. But if you give [from your right as] charity, then it is better for you, if you only knew.â€‌ [Quran 2: 280] In this verse, Allah enjoins patience and tolerance for the one who is poor and cannot repay on time and that the creditor should postpone the deadline. This command came to change the old practice during pre-Islamic era were the creditor used to say to the debtor: â€œEither you pay or I start calculating interest on the loanâ€‌. Also, the verse comes directly after the verses addressing the issue of Ribaa (i.e. interest and usury) in which Allah Says (what means): â€œO you who have believed, fear Allah and give up what remains [due to you] of Ribaa (i.e. interest and interest), if you should be believers. And if you do not, then be informed of a war [against you] from Allah and His Messenger. But if you repent, you may have your principal-[thus] you do no wrong, nor are you wronged.â€‌ [Quran 2: 278-279]

It is a known fact that the worldâ€™s main economical problems resulted from Ribaa (usury and interest) and dealing with it. This caused hunger and poverty amongst people in countries which were (at a given time) rich countries and its people were rich, but the promise of Allah came true in which he threatens those who deal with Ribaa (which means): â€œAnd if you do not, then be informed of a war [against you] from Allah and His Messenger.â€‌ [Quran 2: 279]

Allah did not specify the type of war He would wage against those who deal with Ribaa; whether it is in the form of afflicting them with diseases, making them suffer famine and poverty or a military war.

said: â€œMay Allah show mercy to a man who adopts a kind attitude when he sells, buys and demands for the repayment of loans.â€‌ [Al-Bukhari] This person deserved the mercy of Allah because he dealt with people kindly and postponed the one who could not repay him and whenever asked for his money, he demanded it gently with kind words as not to heart the feelings of the debtor.

These prophetic narrations deeply affected the companions, may Allah be pleased with them, and they acted upon them. â€کAbdullaah the son of Abu Qataadah, may Allah be pleased with him, reported: â€œMy father (i.e. Abu Qataadah) went to a man who was indebted to him, so the debtor hid from Abu Qataadah. Later Abu Qataadah saw the debtor and requested his money but the later informed him that he could not repay him because he did not possess the money and that his financial situation was very tight. Upon hearing this, Abu Qataadah, asked the man saying; `Are you really in a tight situation?` the man responded with the affirmative. Thereupon my father said: I heard the Messenger of Allah

saying: â€œHe who likes Allah to deliver him from the calamities of the Day of Resurrection, let him either give respite to a debtor or grant him remission (of loans) in straitened circumstances.â€‌ Then he cried.â€‌ [Muslim]

said: â€œHe who gives respite to someone who is in straitened circumstances, or grants him remission, Allah will shelter him in the shade of His Throne, on the Day of Resurrection, when there will be no shade except its shade.â€‌ [At-Tirmithi]

Many of the Companions, may Allah be pleased with them, delayed the debtors who could not pay on time for long periods, and in many cases they even dropped and waived the entire debt altogether.

: â€œAny Muslim who lends another Muslim twice will get a reward as if he has spent this money in charity.â€‌ Another narration that was an encouraging factor is the saying of the Messenger of Allah

: â€œHe who gives respite to someone who is in straitened circumstances, will get a reward as if he has spent this amount in charity for every day he delays him until its due date, and after it becomes due he will get double such reward.â€‌

Giving respite and delaying those in tough situations can be the reason of rescuing oneself from Hell. Abu Hurayrah, may Allah be pleased with him, reported that the Messenger of Allah

said: â€œThere was a person who used to loan money to the people and he used to say to his servant: `When an insolvent person comes to you, show him leniency so that Allah may forbear our faults.' So when he met Allah (i.e., when he died), Allah forgave him.â€‌ [Al-Bukhari & Muslim]

Abu Mas`ood Al-Badri, may Allah be pleased with him, reported that the Messenger of Allah

said: â€œA person from amongst the people who lived before you was called to account by Allah on the Day of Resurrection. No good deeds were found in his credit except that he being a rich man had (financial) dealings with people and had commanded his servants to show leniency to those who were in straitened circumstances. Upon this Allah, the Exalted, and Majestic said: `I am more entitled to this attribute, so waive (his faults).`â€‌ [Muslim]

The abovementioned narrations and verses are a great encouragement for the creditor to postpone and give respite to the debtors who can not repay on time due to their strenuous situations. They are messages to the rich who lend others and embarrass them and humiliate them, and may even be the cause for their imprisonment. Indeed, the creditor has the right to do so, but Allah Says (what means): â€œâ€¦ But whoever pardons and makes reconciliation his reward is [due] from Allah â€¦â€‌ [Quran 26: 40] Undoubtedly, the reward from Allah is far better than money which is an interim pleasure.

Repaying the creditor on time:

The debtor should take initiative to repay the creditor as soon as the loan is due. If the debtor is financially unable to repay it all, then at least he should start paying in installments if he possesses the money to do so. One should rush in repayment, because loans will be a hard thing on him in his gave.