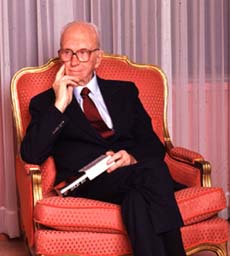 "Muhammad, the inspired man who founded Islam, was born about A.D. 570 into an Arabian tribe that worshipped idols. Orphaned at birth, he was always particularly solicitous of the poor and needy, the widow and the orphan, the slave and the downtrodden. At twenty he was already a successful businessman, and soon became director of camel caravans for a wealthy widow. When he reached twenty-five his employer, recognizing his merit, proposed marriage. Even though she was fifteen years older, he married her, and as long as she lived, remained a devoted husband."

"Like almost every major prophet before him, Muhammad fought shy of serving as the transmitter of God's word, sensing his own inadequacy. But the angel commanded 'Read'. So far as we know, Muhammad was unable to read or write, but he began to dictate those inspired words which would soon revolutionize a large segment of the earth: "There is one God."

"In all things Muhammad was profoundly practical. When his beloved son Ibrahim died, an eclipse occurred, and rumors of God's personal condolence quickly arose. Whereupon Muhammad is said to have announced, 'An eclipse is a phenomenon of nature. It is foolish to attribute such things to the death or birth of a human-being.'

"At Muhammad's own death an attempt was made to deify him, but the man who was to become his administrative successor killed the hysteria with one of the noblest speeches in religious history: 'If there are any among you who worshipped Muhammad, he is dead. But if it is God you worshipped, He lives forever.'"