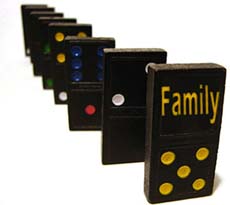 Allah has bestowed upon His slaves many bounties and favors which they cannot count. He has decreed that true Muslim communities can only be established with the existence of families that are obedient to Allah and are nurtured in accordance with His commandments.

Therefore, He has provided Muslims with the elements by which the family is created, as He Almighty Says (what means): {And of His signs is that He created for you from yourselves mates that you may find tranquility in them; and He placed between you affection and mercy....} [Quran 30:21]

Observe how Allah constructs the family – He created companions for men from within themselves so that they may attain harmony. He made the wife the source of spiritual tranquility, but the family still needs a tangible sort of tranquility, which Allah describes Saying (what means): {And Allah has made for you from your homes a place of rest....} [Quran 16:80] Hence, the spiritual serenity is found in the wife and the physical serenity in one's house; together, both of these shape the family, which forms communities.

Muslims are commanded to manage the family according to Islam and Allah has legislated such rules for us whereby we may acquire prosperity and bond the family closely. This is so that the resulting society will be righteous and one which performs Jihad, or struggle, for the sake of Allah, as a result of which Islam will spread throughout the world.

Today, if we study the situation of Muslim families, we will see that most of them live a miserable life, in consequence of being distant from Islamic laws and disregarding them. I will give some examples of things that result in the breakdown or disintegration of families.

However, let us first cite an example of a happy, Islamic family, which lived according to the way Allah has prescribed. Allah Says (what means): {And [mention] Zechariah, when he called to his Lord, “My Lord, do not leave me alone [with no heir], while You are the best of inheritors.} [Quran 21:89]

supplicated to Allah and sought His help, as Allah Says (what means): {Kaaf, Haa, Yaa, ‘Ayn, Saad. This is a mention of the mercy of your Lord to His servant Zechariah when he called to his Lord a private call [i.e. supplication]. He said, “My Lord, indeed my bones have weakened, and my head has filled with white hair, and never have I been in my supplication to You, my Lord, unhappy [i.e. disappointed]. And indeed, I fear the successors after me, and my wife has been barren….} [Quran 19:1-5]

The story goes that Zakariyya

prayed to his Lord with sincerity, complaining that he became old and weak; he went on to acknowledge that Allah always responded to his invocations and never failed him.

then expressed his concern that those whom he will leave behind after his demise will not be able to carry out the mission of conveying Allah's Message and that his wife can no longer give birth. At this point, he commenced his supplication, uttering, as Allah Says (what means): {…So give me from Yourself an heir. Who will inherit me and inherit from the family of Jacob…} [Quran 19:5-6], not to inherit wealth, rather, prophethood.

continued in his prayer, imploring Allah to make him (i.e., the child) pleasing to Himself. The angels, soon after, came to him with glad tidings from Allah about a boy whom Allah named as Yahya (i.e., John). So, Zakariyya

was not the one naming him or even his mother, but it was Allah, The One, who gave the child a name which no human before him had. Allah Says (what means): {And [mention] Zechariah, when he called to his Lord, “My Lord, do not leave me alone [with no heir], while You are the best of inheritors. So We responded to him, and We gave to him Yahya (i.e., John), and amended for him his wife. Indeed, they used to hasten to good deeds and supplicate Us in hope and fear.} [Quran 21:89-90]

Thus, this pious family was obedient to Allah – both the father and son were Prophets, and the wife was devout because Allah made her so. The entire family would rush to please Allah, both during times of prosperity and adversity; they supplicated submissively and were neither heedless nor indulged unnecessarily in this life. This is how families used to be.

Let us examine the case of miserable families which are prevalent amongst our societies today. There is a great danger threatening our community, namely, the phenomenon of family disintegration, which has become our trademark, as a natural result of shunning Islamic legislations and abandoning the religion.

Many families are collapsing from the inside even if they appear to be cohesive, for, in reality, each individual among them lives his own life and is in his own world. Everyone has his own concerns and problems, which no one else shares with him, and nobody senses any commitment towards the others or that he is obliged to do anything for someone else.

Sometimes, two people within the same household may not even talk to each other and you would find that the father sleeps in one room and the mother in another. This is just a plain example and there are many others of its kind, reflecting the breakdown of families within our communities.

There are reasons leading to this disintegration of families, such as what the Prophet

mentioned: “It is enough a sin that one neglects his dependents (i.e., those under his care).” There are many fathers who pay no heed to their children and households, and do not fulfill their due obligations towards them.

The following is an example of such negligence: a man divorced his wife, whilst having children from her, and married another. Later, the second wife convinced him that his sons are aiming to separate them and are using magic to achieve this; things then built up to the extent of accusing them of trying to poison him, so he expelled them from the house. After this, she gave him a choice, saying: ‘Either I stay or your daughter’; thus, he got rid of his daughter and placed her with her other sister who was married, and although she felt very disturbed about having to live in a house as a stranger, she had nowhere else to go.

The father did not spend on the children whom he threw out; some lived with their maternal grandmother and others with their maternal uncles. As for the girl, she stayed with her sister and if she were asked about her brothers, she would reply: ‘I do not know, for my father kicked them out a long time ago and I have no idea where they are now.’

There is another account of one who was influenced by evil friends, who made him spend his salary on prohibitions. He kicked out his wife and children and hardly ever does he go home. Some of his children are sick and need special care; school is about to start and the kids need certain things, yet he is away. The rent is nine months past its due and the landlord protested to the wife who is helpless and alone; he knocked at the door requesting the payment, so some virtuous people helped her out with some money, but the husband, acting like criminals, comes once a month to seize from her whatever donations people have offered her and leaves. He comes for a few moments each month and never checks on his children or family.

Indeed, what the Prophet

said is true: “It is enough a sin that one neglects his dependents (i.e., those under his care).”

Rushing into divorcing the wife is another cause of the collapse of the family. These days, divorce is a widespread occurrence and for senseless reasons. Neither the husbands nor the wives are brought up Islamically to begin with, and consequently, they fight for the simplest of reasons and then, divorce happens on silly grounds.

The outcome is that the family falls apart, the children stay with one of the two parents and are deprived from seeing the other, or are incited by each of the parents against the other, and so on.

A man divorced his wife when his daughter was two months old; she is now twenty-eight years and she has not seen her father except once. He never asked about her or sustained her, yet whenever someone comes asking for her hand, he refuses and sets down difficult conditions.

Before one divorces, he must think about his children: how will he deal with them? Will he visit and watch over them or will he become busy with his new house and life and neglect them?