Start with yourself before others 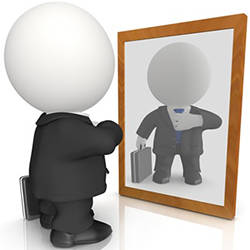 Who to start with?

In Da'wah (call to Islam), start with yourself before the members of your family and other people and look at what is lacking in you in order that you may start treating it.

How is your humbleness in prayer?

When our hearts are overloaded with the pressures of life and at the point of exploding, comes the prayer as an outlet where souls can breathe the taste of tranquility, throw the troubles of life away and become happy and calm. However, for a prayer we have to provide it with what makes us Humble. Allah Says (what mean): {Indeed, they used to hasten to good deeds and supplicate Us in hope and fear, and they were to Us humbly submissive} [Quran 21:90]

Read about that which will better your condition and that of your prayer, increase your humbleness in it and soften your heart.
How is your relationship with Allah?

Are you one whose supplications are answered or do you notice most of your supplications not being answered?
Look into your Aqeedah (Faith) and the level of your certainty and reliance upon Allah, and observe closely your food and drink - are they from that which is Halal (lawful) or Haram (unlawful), or is there some doubt about their source?

If the situation was one that requires enjoining good and forbidding evil, what would you do? Prophet Muhammad said: "By Him in Who's Hand is my soul, you will enjoin good and prohibit evil or (else) Allah will soon send upon you a punishment from Him, then you will call upon Him and He will not answer you." [Ahmed and At-Tirmithi]

Maybe you would benefit from reading Hadeeths (Prophetic narrations) pertaining to the punishment of the grave and that of its bliss, about the terror of the Resurrection, and the torment of the Hell Fire. You could well continue reading for days, weeks or months, accompanying that with good actions and self-struggle.

Have you fulfilled the rights of the creation, one to another? Or are you in a constant state of postponing and deferring?
Have you converted your knowledge of repentance into crying and penitence?
Have you turned whatever you have read about loving Allah into real love for your Muslim brothers?
Do you often visit them, and overlook their faults? Do you aid the needy from amongst them, feel delight for their happiness and grieve for their sorrow?

Do you taste the sweetness and delight of Faith?

Are Allah and his Messenger more beloved to you than anybody else?

Do you give precedence to the love of Allah over wealth, business, whims and desires?
Test yourself when you hear the call to prayer, if you notice a desire to delay answering it in order to pursue your interests in trade (for example) then know that Satan has succeeded in gradually leading you astray and that your love for Allah is deficient. In this way it is upon you to consolidate yourself, giving precedence to the orders of Allah over any other worldly matter.

How is your abhorrence of entering into disbelief? Do you abhor it as you would abhor being thrown into the Hell Fire?
Do you live this abhorrence and this feeling in you, so that your sincerity to Allah is cultivated and that you may hasten to purify your soul?
Contemplate the Hadeeth of Umm Salamah, may Allah be pleased with her, who said: “‘Most of the invocations of the Messenger of Allah used to be: “O Changer of the Hearts make my heart firm upon your religion.” [Ahmed and At-Tirmithi]

This is what Abu Ad-Darda', may Allah be pleased with him, used to fear hence his saying: 'Verily what I fear from my Lord on the Day of Resurrection is that He calls me in front of all creation and Says to me “O 'Uwaymir (i.e., Abu Ad-Darda' himself),” so I say, “Here I am My Lord at Your service,” so He Says, “What did you act upon from the knowledge that you acquired?”
Don't forget the supplication of Yoosuf (Joseph), may Allah exalt his mention, Allah Says about it in the Quran (what means): {Cause me to die as a Muslim and join me with the righteous.} [Quran 12:101]

You should aid yourself through fear: living with the fear of eternal abode in the Hell Fire. Don't rest and sit around while the sweetness of Faith is missing or is weakened. How many people set out on journeys for the purpose of treating their illnesses and how many of them spend out of their wealth to treat these illnesses? Do not the souls and the hearts have more priority in being treated, as their matter is one of total eternity? Bring to mind the Hadeeth, “Every slave will be resurrected upon that which he died.” [Muslim], then expect death at any moment.

It is better for you if you were to meet death whilst trying to improve your own condition than to die whilst striving to improve others', being held accountable at the same time for leaving off obligatory actions just like the lantern that burns itself out and gives light to others, as in the Hadeeth: “The example of the scholar who teaches the people good things but forgets himself is that of a lantern, it gives light to the people but burns itself out.” [At-Tabarani]