The quest of the Pilgrim 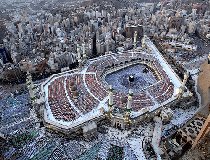 From the steppes of Caucasia and the lands of the Moors, from the smallest village in Xinxiang and the farthest in Brazil, from black Africa, brown Asia and white Europe, from all races and languages, millions of people, men and women, old and young, rich and poor, individually and in groups, light and heavy, and using all means of transportation, set their faces every year at the same time toward the same specified destination seeking the same goal.

Their hearts aspire to connect and be accepted, dread being rejected, and hope to fill with Emaan (faith). With burning desire, every cell in their bodies twinges with the promise of dwelling for a few days in a "valley that is infertile" near the Sacred House of Bakkah, which they will so humbly and willingly circumambulate, as their Lord commanded, and trust that they shall be transformed.
These are the Hujjaj, the Muslim Pilgrims, who come every year, from every faraway passage to attest by their stark presence to their unwavering hope in the forgiveness of their Creator, and to renew, on behalf of us all, the undivided commitment of their Ummah (Muslim Nation) to its Lord.
Each year, only a fraction of us fulfill the biggest ritual ambition in all of life. How many a Pilgrim spends his entire life saving pennies to join a countless number of others who have done the same? There in Makkah, at the Ka`bah, between Safa and Marwah, at Muzdalifah, on 'Arafat, in Mina, he is divinely enlisted in the ranks of the chosen spiritual elite, not only in the present moment, but straight through to the first human past. For there have and will trod the greatest luminaries of all time: The Prophet Muhammad

Ismaa'eel (Ishmael) and Ibraaheem (Abraham), Hajar, Nooh (Noah) all the way to the beginning, to our common mother Eve and the father of us all, Aadam, who himself' established the Ka`bah as the unprecedented House of Allah on Earth. And, yes, when 'Eesa (Jesus) returns, he shall make Hajj.
In a spiritual irony, unknown believers embark on a most sought after and spectacular journey, one that will confer upon them the illustrious distinction of no worldly distinction at all, for such is the nondescript mark of those who successfully visit the Ancient House to become "undefined" and, thereby, to recover their lost true identity: Believing man.
The Pilgrim wholeheartedly removes all trace of physical and worldly difference. With everyman, he then unifies the primordial intention of abject and unequivocal affirmation of the Oneness of man's only Lord. As a huge, humble body, he, they, then move in ritual as one, seeking to be forgiven and purified, a return to the original sinless state upon which man has truly been created. And forgiveness is exactly what they get, right at the outset of their worship, in 'Arafaat.
How amazing is Allah's Grace! For every act one does in obedience, Allah bequeaths a distinct reward, but only after it is completed—except for Hajj. Its ultimate prize is gifted at the moment its first ritual is begun.
Hajj is unique in countless ways, and Muslims are encouraged in the Quran to give it our most rigorous contemplation. For all acts of Hajj are laden with layered secrets, meanings, and unique outcomes.
Here is a sojourn that links earth with Heaven, history with geography, the past with the future. “Hajj,” as some knower of truth put it, “is estrangement from one's self, with oneself, for oneself. Hajj is of everything in this life and the next. It is a debt we owe to God and our journey to Him to forgive it.
Hajj is the most intense seminar in community, giving us permanent insight into establishing everlasting ones. In essence, it is about the family, magnifying its centrality, emphasizing the nobility of the mother, the beneficence of progeny the arduous, and often misunderstood, burden of fatherly leadership. For Hajj commemorates the family mission of Prophet Ibraaheem, rebuilder of the Sacred House, his wife Hajar, who emigrated with him for Allah's sake to the ends of the desolate earth, and his son Ismaa'eel, content with Allah's decrees, compliant with his father's struggle to fulfill them.
Behold the fathomless value of family enshrined for all time in the sacredness of husband-wife, parent-child relationships!
Hajj is about returning to roots, starting with the purpose of delineating the finish, and asking the two ultimate mortal questions: Where does it begin? Where does it end?