Dire consequences of Injustice - I 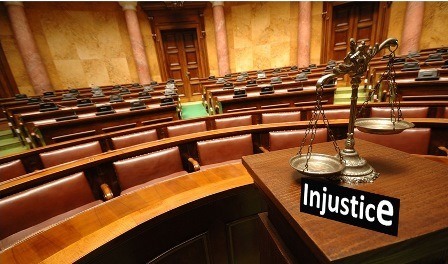 Injustice is deviation from justice and violation of the truth.

There are three broad types of injustice:

·        {And [mention, O Muhammad], when Luqman said to his son while he was instructing him, “O my son, do not associate [anything] with Allah. Indeed, association [with him] is great injustice.”}[Quran 31:13]
·        {Indeed, the curse of Allah is upon the unjust.} [Quran 11:18]
2-   To be unjust towards other people: Allah The Almighty Says (what means):
·        {And the recompense of an odious deed is an odious deed the like of it; yet whoever is clement and acts righteously, then his reward is up to Allah. Surely, He does not love the unjust.}[Quran 42:40]
·        {The cause is only against the ones who wrong the people and tyrannize upon the earth without right. Those will have a painful punishment.} [Quran 42:42]
3-   To be unjust towards oneself: Allah The Almighty Says (what means):
·        {Then we caused to inherit the Book those We have chosen of Our servants; and among them is he who wrongs himself.} [Quran 35:32]
·        {He [Moosa] said, “My Lord, indeed I have wronged myself, so forgive me,” and He forgave him. Indeed, He is the Forgiving, the Merciful.} [Quran 28:16]
In fact, all three types are considered as doing injustice to oneself as one wrongs oneself when one intends to do injustice.
Ath-Thahabi

maintained that injustice is a major sin and said that doing injustice to others may take the form of trespassing on their property, abusing them physically or verbally, and attacking the weak. He mentioned the Quranic verses and Prophetic Hadeeths that threaten the unjust. Then he reported that some of the righteous predecessors said, “Do not wrong the weak so as not to be one of the evil strong people.” In addition to this, he mentioned some forms of injustice that he considered to be major sins:
-      Devouring the property of orphans
-      Procrastination in repaying debts despite the ability to repay at the due time.
-      Denying a wife her rights such as dowry, clothing and provision.
-      Denying a laborer his wage or salary
-      Inaccurate divisions and valuation, which are considered major sins, according to Ibn Hajar

.
The Texts of the Sharee‘ah Dispraise Injustice
Allah The Almighty Says (what means):
·        {And those cities - We destroyed them when they wronged, and We made for their destruction an appointed time.} [Quran 18:59]
·        {And in no way did We do injustice to them, but it is they who were the unjust.} [Quran 43:76]
·        {Allah does not love the unjust.}[Quran 3:57]
·        {And your Lord does injustice to no one.}[Quran 18:49]
·        {And your Lord is not ever unjust to [His] servants.} [Quran 41:46]
·        {Verily the unjust are surely in perpetual torment.} [Quran 42:45]
In addition, there are many Quranic verses that speak about doing injustice to oneself. These verses explain that this type of injustice comes in two forms: Shirk (polytheism), and disobeying Allah The Almighty. Shirk is the most heinous of sins; Allah The Almighty Says (what means): {Then we caused to inherit the Book those We have chosen of Our servants; and among them is he who wrongs himself, and among them is he who is moderate, and among them is he who is foremost in good deeds by permission of Allah. That [inheritance] is what is the great bounty.}[Quran 35:32]
Doing injustice to others through aggression against their lives, property or anything else, is dispraised in many Quranic verses such as the verse that reads (what means):{The cause is only against the ones who wrong the people and tyrannize upon the earth without right. Those will have a painful punishment.}[Quran 42:42]
Similarly, the Hadeeths of the Prophet,

, said: “Indeed, Allah gives respite to the oppressor, but when He seizes him, He does not let him escape.”' Then he recited:{And thus is the taking away of your Lord when He takes away the towns [while] they are unjust; surely His taking away is painful [and] strict.}[Quran 11:102] [Al-Bukhari and Muslim]

, said:“Protect yourselves against doing injustice, for injustice will be darkness on the Day of Resurrection.”[Muslim]
-      ‘Aa’ishah

who was disputing with some people over a piece of land, “O Abu Salamah, beware of seizing land unjustly because the Prophet

said, ‘Whoever seizes unlawfully a hand-span of land, a collar of seven lands will be around his neck [in the Hereafter].’” [Al-Bukhari and Muslim]
-      It was narrated on the authority of Huthayfah

, said: “Whenever a person is murdered, there is a share of the burden of the crime on the son of ’Adam [Adam]

since he was the first to commit murder.”[Al-Bukhari and Muslim]
-      It was narrated on the authority of Abu Hurayrah

, said:
Do not envy one another; do not commit Najash [to overbid against a rival purchaser simply to harm him with no intention of buying the merchandise]; do not hate one another; do not turn your backs on one another; do not enter into commercial transactions when others have entered into that [transaction]; rather, be, O slaves of Allah, brothers. A Muslim is the brother of a Muslim; he does not do injustice to him, he does not let him down, and he does not disdain him. Piety is here, [and he pointed to his chest three times]. It is enough evil for a Muslim to disdain his brother Muslim. All of a Muslim is inviolable for other Muslims: his blood [life], his property and his honor.[Muslim]
The righteous predecessors also dispraised injustice in their sayings:
-      ‘Ali ibn Abi Talib

would say, “I would be terrified to wrong a person who has none but Allah The Exalted to seek His help against me.”
-      Abu Al-‘Aynaa’

said, “I had some unjust enemies, and I complained about them to Ahmad ibn Abi Dawood. I said to him, ‘They have become united like a single hand against me!’ He replied, ‘{The hand of Allah is over their hands.}[Qur’an 48:10]’ I said, ‘They are cunning!’ He replied, ‘{The evil plot does not encompass except its own people.} [Qur’an 35:43]’ I said, ‘They belong to a large company.’ He replied, ‘{How many a small company has overcome a large company by permission of Allah The Exalted.}[Qur’an 2:249]’”.
-      Yoosuf ibn ’Asbat

said, “Whoever wishes an oppressor long life wants Allah The Exalted to be disobeyed in His universe.”
-      Ibn Mas‘ood

said, “When the punishment was removed from the people of Yoonus

they all returned the rights of others to the extent that a man would pluck a stone out of the foundation of his house and return it to its owner.”
-      Abu Thawr ibn Yazeed

said, “Using an unlawfully acquired stone in a building is considered the beginning of its destruction.”
-      A scholar said, “Had a single stone of injustice been used in building Paradise, the House of Eternity, it would have been ruined.”
-      A sage said, “When you want to do injustice, remember the justice of Allah The Almighty that will be executed against you. When you want to use your strength to wrong others, remember that Allah The Exalted has the strength to punish you. Never, be impressed by someone who sheds blood, as his Assassin never dies.”
-      Yazeed ibn Hatim would say, “I fear nothing more than a person whom I wronged while knowing that he has no supporter but Allah The Exalted, especially when he says, ‘Allah The Exalted is sufficient to judge between me and you.’”
-      One day, ‘Ali ibn Al-Fudhayl wept, so he was asked why. He replied, “I feel sorry for those who wronged me, because they will have nothing to say to Allah The Almighty as an excuse.”
-      While Sulayman ibn ‘Abdul-Malik was on the pulpit, a man said to him, “Remember the Day of Announcement!” Sulayman descended from the pulpit and asked the man, “And what is the Day of Announcement?” The man answered, “Allah The Almighty Says (what means): {Then an announcer will announce between them, “The curse of Allah be on the unjust.”}[Quran 7:44]”
-      Abu Ad-Dardaa’

said, “Beware of the orphan’s tears and the supplication of a wronged person.”
-      Some scholars state that there are three types of injustice:
o   Unforgivable injustice: This type refers to Shirk, from which we seek refuge with Allah The Exalted. Allah The Almighty Says (what means): {Indeed, Allah does not forgive association with Him, but He forgives what is less than that for whom He wills.}[Quran 4:48]
o   Injustice that cannot be waived: This type refers to doing injustice to the servants of Allah The Almighty.
o   Forgivable Injustice: This type refers to wronging oneself.
-      A man passed by a person whom Al-Hajjaj had crucified, and said, “O Allah, your leniency with the oppressors has harmed the oppressed.” When the man slept that night he saw in a vision that he entered Paradise, and saw the man who had been crucified in the highest ranks of Paradise; then he heard a caller say, “My leniency with the oppressors has admitted the oppressed people to the highest ranks in Paradise.”
-      It was said, “Whoever plunders others property, others will plunder his property.”
-      It is said, “Whoever does injustice for long, loses power.”
-      ‘Umar

said, “The previous nations were destroyed because they kept denying people's rights until this became rampant, and they spread transgression until its rights were ransomed.”
-      It was said, “The most evil of all wrongdoers is the one who wrongs some people for the benefit of others.”
-      Ibn Al-Jawzi said, “Injustice necessitates two sins: usurping others’ rights and defying Allah The Exalted with disobedience. The sin of doing injustice is more evil than other sins because it is usually committed against the weak, who are powerless to fend for themselves. The cause of injustice is the darkness of the heart; a man whose heart is lit with guidance would not commit injustice.”
-      Ibn Taymiyyah