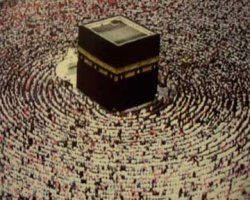 , completed the proclamation of the message, Makkah was conquered and people embraced Islam in multitudes, Allah The Almighty enjoined performance of pilgrimage at the end of the ninth year of Hijrah. So, the Prophet,

, resolved to perform Hajj and he declared his intention for that purpose. Therefore, a lot of people came to Al-Madeenah with the intention of accompanying the Prophet,

, to perform Hajj when they heard the news.

, left Al-Madeenah in the afternoon and proceeded until he reached Thul-Hulayfah where he bathed for Ihraam, applied hair oil and perfume, put on his Izaar and Ridaa’, and marked the camels he intended to offer as sacrifice, then he raised his voice with Talbiyah for performing both pilgrimage and ‘Umrah. He proceeded while making Talbiyah and saying: "Labbayka Allahumma labbayk, Labbaykah laa shareeka laka labbayk. Innalhamda wanni‘mata laka walmulk, laa shareeka lak." (O Allah, here I am at Your service. There is no partner to be associated with You. Praise, graces and dominion are Yours. There is no partner to be associated with You.)
When he was close to Makkah, he stopped at Thu Tuwa where he spent the night of Monday, 4th of Thul-Hijjah, and performed dawn prayer there, then he bathed and entered upper Makkah by day. When he entered the Sacred Mosque, he circumambulated the Ka‘bah and hastened between As-Safaa and Al-Marwah. He did not terminate his Ihraam because he intended to perform both Hajj and ‘Umrah and had brought the sacrificial animals along with him. He ordered those who did not bring sacrificial animals to intend their Ihraam to perform ‘Umrah, circumambulate the Ka‘bah, hasten between As-Safa and Al-Marwah and then terminate their Ihraam.
.
The Prophet

and his Companions stayed in Makkah for four days – from Sunday to Wednesday. In the forenoon, Thursday 8th of Thul-Hijjah, the Prophet,

, together with the Muslims headed for Mina where he performed Thuhr, ‘Asr, Maghrib, ‘Ishaa’ and Fajr prayers. He remained there until the sun had risen, and afterwards he ordered a hair tent to be pitched at Namirah, a place near ‘Arafaat, not a part of ‘Arafaat itself. The Prophet,

, proceeded until he reached Namirah. When the sun reached its zenith, he ordered his she-camel, Al-Qaswaa’ to be saddled, and he rode to ‘Uranah valley where thousands of people gathered around him.
He gave a comprehensive Khutbah (sermon) in which he reminded those present of the foundations and rules of Islam, saying:
Your blood is unlawful beyond shedding and your properties are unlawful beyond prohibited seizure in the same manner this day is inviolable, in this month and in this country. All matters related to the pre-Islamic era are invalid, and there must not be retaliation for those who were killed in that era – this to be extended first to the case of the son of Rabee‘ah ibn Al-Haarith who was nursed in Banu Sa‘d and killed by Huthayl tribe. The usury of the pre-Islamic era is no longer valid– this to be applied first to the entire usury of ‘Abbaas ibn ‘Abdul-Muttalib.
Fear Allah The Almighty towards women, for you married them with a divine covenant to care for them and to be good husbands to them, and they became sexually lawful for you by virtue of the word of Allah. Your wives must not permit anyone unfavorable to you in your houses. If they did, you are permitted to hit them lightly. Your wives are entitled to provision and clothing according to what is acceptable. I leave the Book of Allah, the Quran, beyond which you will never go astray if you adhere to it. You will be asked about me, so how will you answer?
The people replied, 'We testify that you have proclaimed the message perfectly and had a whole-hearted concern for our welfare.' Therefore, the Prophet

, led Thuhr prayer, then Iqaamah was made again and he led ‘Asr prayer. He did not pray in between.
Afterwards, the Prophet,

, rode to the standing place of ‘Arafaat where he faced the direction of Qiblah and stood until sun set, and there Allah The Almighty revealed to him the verse that says (what means): {This day I have perfected for you your religion and completed My favor upon you and have approved for you Islam as religion.} [Quran 5:3]
When the sun set, the Prophet,

, departed from ‘Arafaat and let Usaamah ibn Zayd, may Allah be pleased with him, ride behind him. He rushed off and ordered the Muslims to be tranquil until he reached Muzdalifah where he performed Maghrib and Ishaa’ prayers after one Athaan and two Iqaamahs had been made. He did not pray in between. He, then, slept till dawn and prayed Fajr early in the morning. He rode to Al-Mash‘ar Al-Haraam, a place in Al-Muzdalifah, where he faced the direction of the Qiblah and continued supplicating Allah The Almighty, observing Takbeer and Tahleel and announcing the oneness of Allah The Almighty. He stood there until the morning was bright. He went quickly to Mina before the sun rose while continuously making Talbiyah. He ordered Ibn ‘Abbaas, may Allah be pleased with him, to pick up seven pebbles for him, and when he reached Mina he hurled seven pebbles at Jamratul-‘Aqabah making Takbeer each time he hurled a pebble.
Then, he gave an eloquent Khutbah in which he told people about the merits and inviolability of the Day of An-Nahr (slaughtering), the special inviolability attached to Makkah apart from other places, and he ordered them to listen and obey, learn the pilgrimage rites from him and to propagate his proclamations. Also, the Prophet,

, forbade them from turning to disbelief by killing one another.
Afterwards, the Prophet,

, left to the slaughtering place where he slaughtered sixty-three camels and ordered ‘Ali, may Allah be pleased with him, to slaughter the rest of the hundred camels. Having completed the slaughtering, the Prophet,

, summoned the barber to shave his head, and then he divided the shaved hair among those who were around him.
After that, the Prophet,

, departed to Makkah while riding, performed Tawaaf Al-Ifaadhah , prayed Thuhr prayer at Makkah, and then he returned to Mina on the same day and spent the night there. When it was morning, he waited until the sun was at its zenith and the noon was due, and at that time he went to the Jamaraat and started to hurl pebbles at the Al-Jamrah As-Sughra, then Al-Wusta and then Al-‘Aqabah, throwing seven pebbles at each Jamrah and making Takbeer each time he hurled a pebble. He did the same during the 11th, 12th and 13th of Thul-Hijjah. During these days, he stayed at Mina to perform rites, teach people the legislations of Islam, remember Allah The Almighty, establish monotheism and obliterate the features of Shirk (polytheism).
On the 13th of Thul-Hijjah, the Prophet,

, rushed from Mina and stopped at the valley of Banu Kinaanah in Al-Abtah zone and stayed there for the rest of the day and the whole night. Then he prayed Thuhr, ‘Asr, Maghrib and ‘Ishaa’ prayers and took a nap after which he rode to the Ka‘bah, circumambulated it for farewell and then returned to Al-Madeenah.
Thus, the Prophet,