The Hajj of the Prophet, sallallaahu â€کalayhi wa sallam - II 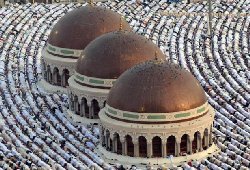 then waited a little until the sun rose, and commanded that a tent of hair should be pitched at Namirah. The Messenger of Allah

then set out and the Quraysh did not doubt that he would halt at Al-Mash‘ar Al-Haraam (the sacred site at Muzdalifah) as the Quraysh used to do in the pre-Islamic period. The Messenger of Allah

however, passed on until he came to ‘Arafah and he found that the tent had been pitched for him at Namirah. There he got down until the sun had passed the meridian; he commanded that Al-Qaswaa’ should be brought and saddled for him.

Then he came to the bottom of the valley, and addressed the people saying:
“Verily your blood and your property are as sacred and inviolable as the sacredness of this day of yours, in this month of yours, in this town of yours. Behold! Everything pertaining to Jaahiliyyah (pre-Islamic era) is under my feet completely abolished. Abolished are also the blood-revenges of Jaahiliyyah. The first claim of ours on blood-revenge which I abolish is that of the son of Rabee‘ah bin Al-Haarith, who was nursed among the tribe of Sa‘d and killed by Huthayl. And the usury of pre-Islamic era is abolished, and the first of our usury I abolish is that of ‘Abbaas bin ‘Abdul-Muttalib, for it is all abolished.
Fear Allah concerning women! Verily you have taken them on the covenant of Allah, and intercourse with them has been made lawful to you by the words of Allah. You too have right over them, that they should not allow anyone whom you dislike to enter your home. But if they do that, you can beat them but not severely. Their rights upon you are that you should provide them with food and clothing in a fitting manner. I have left among you the Book of Allah, and if you hold fast to it, you would never go astray. And you would be asked about me (on the Day of Resurrection), (now tell me) what would you say?"
They (the audience) said, 'We will bear witness that you have conveyed (the message), fulfilled (the mission of Prophethood) and given wise (sincere) counsel.'
He (the Prophet

) then raised his forefinger towards the sky and pointing it at the people (said): "O Allah, be witness. O Allah, be witness," saying it thrice. (Bilaal, may Allah be pleased with him, then) pronounced Athaan (call for prayer) and later on Iqaamah (second call for prayer) and he (the Prophet) led the Thuhr (afternoon) prayer. He (Bilaal) then uttered Iqaamah and he (the Prophet) led the `Asr (late afternoon) prayer and he observed no other prayer in between the two. The Messenger of Allah

then mounted his camel and came to the place of standing (At `Arafah) making his she-camel Al-Qaswaa’ turn towards the side where there were rocks, having the path taken by those who went on foot in front of him, and faced the Qiblah.
He kept standing there until the sun set, and the yellow light had somewhat gone, and the disc of the sun had disappeared. He made Usaamah, may Allah be pleased with him, sit behind him, and he pulled the nose string of Al-Qaswaa’ so forcefully that its head touched the saddle (in order to keep her under perfect control), and he pointed out to the people with his right hand to be moderate (in speed), and whenever he happened to pass over an elevated tract of sand, he slightly loosened it (the nose-string of his camel) to climb up until he reached Al-Muzdalifah. There he led the Maghrib (sunset) and ‘Ishaa’ (night) prayers with one Athaan and two Iqaamahs and did not  observe voluntary Rak‘ahs (units) between Maghrib and ‘Ishaa’ prayers.
The Messenger of Allah

then lay down until dawn and offered the dawn prayer with an Athaan and Iqaamah when the morning light was clear. He again mounted Al-Qaswaa’, and when he came to Al-Mash‘ar Al-Haraam, he faced the Qiblah, supplicated Allah, glorified Him, and pronounced His oneness (La ilaaha illa Allah), and kept standing until the daylight was very clear.
He then went quickly before the sun rose, and seated behind him was al-Fadhl bin ‘Abbaas, may Allah be pleased with him, and he was a man with beautiful hair, fair complexion and a handsome face. As the Messenger of Allah

was moving on, there was also going a group of women (side by side with them). Al-Fadhl began to look at them. The Messenger of Allah

placed his hand on the face of Al-Fadhl, may Allah be pleased with him, who then turned his face to the other side, and began to look, and the Messenger of Allah

turned his hand to the other side and placed it on the face of Al-Fadhl, may Allah be pleased with him. He again turned his face to the other side until he came to the midst of (the valley of) Muhassir.
He urged her (Al-Qaswaa’) a little, and, following the middle road, which comes out at Al-Jamrah Al-Kubra, he came to the Jamrah which is near the tree. At this he threw seven small pebbles, saying Allahu Akbar while throwing every one of them in a manner in which the small pebbles are thrown (with the help of fingers) and this he did in the midst of the valley. He then went to the place of slaughtering the sacrifice, and slaughtered sixty-three (camels) with his own hand.
Then he gave the remaining number to ‘Ali, may Allah be pleased with him, who slaughtered them, and he made him share his sacrifice. He then commanded that a piece of flesh from each animal sacrificed should be put in a pot, and when it was cooked, both of them (the Prophet and ‘Ali) took some meat out of it and drank its soup. The Messenger of Allah

again rode and came to the House, and offered the Thuhr prayer at Makkah. He came to the clan of ‘Abd Al-Muttalib, who were supplying water at Zamzam, and said: “Draw water. O Bani ‘Abd al-Muttalib; were it not that people would usurp this right of supplying water from you, I would have drawn it along with you.” So they handed him a bucket and he drank from it.
A pause to contemplate this Hadeeth:
Imaam An-Nawawi

said, “The Hadeeth of Jaabir, may Allah be pleased with him, is a great Hadeeth that includes a bunch of benefits and precious, important rules. Many discussions were made about the Fiqh (Islamic jurisprudence) it includes. Abu Bakr bin Al-Munthir compiled a large book about it. He extracted about one hundred and fifty issues of Fiqh. Had he exerted more effort, he would have extracted almost the same number of extra issues.”
Lessons to be learned from the Hadeeth:
This Hadeeth of Jaabir, may Allah be pleased with him, included many benefits and rulings. We are going to deal with those benefits and rulings relevant to rulings of Hajj. They are as follow:
-         It is recommended for the Imaam and ruler to notify people about the important matters in order to be ready for them.
-         It is recommended to do Ghusl before Ihraam for men and women, even those women who are in the state of menstruation or postpartum bleeding. For the Prophet,

, said to Asmaa’, may Allah be pleased with her: “Do Ghusl (ritual bath)!” If the woman who is in a state of postpartum bleeding should do Ghusl, then, it is worthier for other women to do so.
-         Permissibility of raising one’s voice with Talbiyah since the beginning of Ihraam. It is recommended to adhere to the wordings of Talbiyah that were said by the Messenger of Allah,