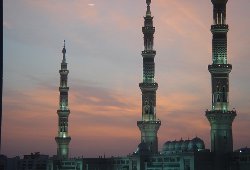 -          Once reaching Makkah, the pilgrim should hasten to Al-Masjid Al-Haraam in order to make Tawaaf (circumambulation) because Tawaaf is the most important goal for the pilgrim performing Hajj or 'Umrah.

-         Permissibility to touch the Black Stone at the beginning of Tawaaf.

-         Permissibility to kiss the Black Stone during Tawaaf but one should not overcrowd to reach it. It is impermissible to kiss any other inanimate objects and stones such as the standing place of Ibraaheem or the walls of the Ka'bah.

-         According to Sunnah (Prophetic tradition), one should observe Ramal (brisk walking) during the first three rounds of Tawaaf, then walk at his normal pace in the other four rounds. Ramal is to speed up one’s pace with short steps. Ramal is recommended only in the Tawaaf of Hajj and 'Umrah. One should not observe Ramal in case of making Tawaaf for other purposes.

-         It is an act of Sunnah to observe Idhtibaa‘ during a Tawaaf where Ramal is Sunnah. Idhtibaa‘ means wrapping the garment under the right armpit and rolling the two ends over the left shoulder, so that the right shoulder is exposed and the left is covered.

-         One should hasten after ending Tawaaf to do Sa'y (going between As-Safa and Al-Marwa). It is better to do so; however, if there is an excuse that necessitates delaying Sa`y then it is permissible to delay it.

-         According to the majority of scholars, one should start doing Sa‘y from As-Safa because the Prophet,

, said: “I begin with what Allah The Almighty began with”.

-         It is recommended to ascend As-Safa and Al-Marwah until the Ka'bah becomes visible if this is possible. According to Sunnah, a pilgrim should stand on As-Safa facing the Ka'bah and mention Allah saying the mentioned Thikr (remembrance) in the Hadeeth of Jaabir, may Allah be pleased with him. He should supplicate Allah. Thikr and supplication should be repeated thrice.

-         According to Sunnah, none should go to Mina before the Day of Tarwiyah, the eighth of Thul-Hijjah. The pilgrim should pray the five prayers at Mina. Combining prayers at Mina is not an act of Sunnah.

-         According to Sunnah, the pilgrim should stay the night of the ninth of Thul-Hijjah at Mina, the night that precedes the day of ‘Arafah. That overnight stay there is an act of Sunnah. According to consensus of scholars, if the pilgrim misses that overnight stay, he does not have to offer any animal to be slaughtered as expiation for this act as determined by consensus.

-         According to Sunnah, the pilgrim should not go to Mina until the sunrise of the day of ‘Arafah, ninth of Thul-Hijjah according to the scholars’consensus.

-         It is permissible for the one who is in a state of Ihraam to stand under the shade of a dome and the like. There is no difference among scholars regarding this ruling.

-         The land of Namirah is not included in ‘Arafaat. If the pilgrim stays the day of ‘Arafah in it, it would be invalid for him.

-         Permissibility of facing Qiblah during supplication on the day of ‘Arafah, raising hands, supplicating Allah The Almighty a lot, remembering Him much. The Prophet,

, said: “The best supplication is the supplication of the day of ‘Arafah. The best thing that I and the Prophets before me say is Laa ilaaha illallaahu wahdahu la shareeka lah, lahul mulku wa lahul hamd, wa huwa ‘ala kulli shay’in Qadeer (None is truly worthy of worship but Allah Alone, who has no partner. To Him belongs the dominion, to Him belongs all praise, and He has power over everything).” [At-Tirmithi]

-         According to Sunnah, after leaving ‘Arafaat, the pilgrim should postpone praying Maghrib to the time of ‘Ishaa’. They should be prayed together at Al-Muzdalifah as deferred combination of prayer.

-         According to Sunnah, when the pilgrim throws the pebbles of Jamrat Al-‘Aqabah, he should let Mina, ‘Arafaat and Al-Muzdalifah be on his right side and Makkah on his left side.

-         It is not ordained to stand to supplicate Allah after throwing the pebbles of Jamrat Al-‘Aqabah.

-         The Hadeeth indicates the permissibility to authorize someone to slaughter on behalf of the pilgrim. ‘Ali, may Allah be pleased with him, slaughtered the rest of the sacrificial animals on behalf of the Prophet,

-         It is an act of Sunnah to drink from the water of Zamzam, and to drink of it to one’s fill because the Prophet,

, did so and because there is blessing in this water.

of this Hadeeth (he had compiled a book dedicated to commentary on this Hadeeth) in which he mentioned the many benefits and rulings derived from this Hadeeth.