How The Salaf Prayed At Night During Ramadan 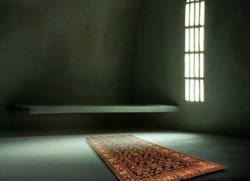 It was narrated that the Prophet

said: "Whoever observes the night voluntary prayers during the month of Ramadan out of sincere faith and hoping to attain the reward of Allah, then all his past sins will be forgiven." [Al-Bukhari and Muslim]

In the Quran, Allah The Almighty Says (what means): {And the servants of the most Merciful are those who walk upon the earth easily, and when the ignorant address them [harshly], they say [words of] peace, And those who spend [part of] the night to their Lord prostrating and standing [in prayer.} [Quran 25: 63-64]

as well as the Companions

were keen to perform the night voluntary prayers in Ramadan. ‘Aa’ishah

said, "Do not leave the night voluntary prayer, for the Messenger of Allah

did not leave it. When he was sick or tired, he used to perform the prayer while he was sitting."

used to perform whatever Allah The Almighty willed that he should perform of the voluntary night prayers. In the middle of the night, he used to wake up his family and say to them, 'Prayer, prayer,' and then recite the verse in which Allah The Almighty Says (what means): {And enjoin prayer upon your family [and people] and be steadfast therein. We ask you not for provision; We provide for you, and the [best] outcome is for [those of] righteousness.} [Quran 20: 132]

used to recite the verse in which Allah The Almighty Says (what means): {Is one who is devoutly obedient during periods of the night, prostrating and standing [in prayer], fearing the Hereafter and hoping for the mercy of his Lord, [like one who does not]?} [Quran 39: 9], and say, "That is ‘Uthmaan ibn ‘Affaan

said that because of the intense prayer and recitation of the Quran during the night by the Commander of the Believers, ‘Uthmaan

to the extent that he would even recite the whole Quran in just one Rak‘ah."

narrated, "I once spent the night with ‘Abdullaah ibn Mas‘ood

. He woke up at the beginning of night and began to pray. He recited the Quran in a way similar to that of the Imam of his district, with a medium regular pace. Those around him could hear him and he continued until what remained of the night's darkness was equal to the time between the Athaan (the first call of prayer) for the Maghrib (sunset) prayer and the end of the Maghrib prayer (meaning a short time before the break of dawn). He

then performed the Witr (odd) prayer."

narrated that, "The leader in the voluntary night prayer would recite hundreds of verses such that we supported ourselves with staves due to the lengthiness of the prayer but we did not leave until the break of dawn."

Note, also, that you should complete the Taraaweeh prayer with the Imam in order to be recorded as one of those who spend (the night) in prayer. The Prophet

said: "Whoever prays with the Imam until he finishes, Allah will record for him standing a whole night in prayer." [Abu Daawood, An-Nasaa’i, At-Tirmithi and Ibn Maajah]