Sighting the Crescent of Ramadan - II 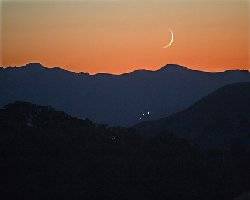 Muslim countries pay special attention to the month of Ramadan and go out to observe its crescent in order to confirm the sighting. When the sighting is confirmed, Muslims start fasting, the minarets of mosques are lit, the mass media celebrates the occasion and announces the glad tidings of the advent of the month, people congratulate each other, guns are fired, scholars launch campaigns for spreading knowledge and giving sermons and religious lectures are given everywhere in religious associations.

It is no surprise that we receive the crescent of Ramadan with all these scenes, since it marks the beginning of fasting and descent of mercies on the slaves of Allah The Almighty. It is also the key to the blessed days that the believing hearts long for from year to year, while repeating at each moment the supplication: "O Allah, make us witness Ramadan and grant us success to perfectly fast, perform the voluntary night prayer and obey You."
The majority of scholars are of the opinion that all Muslims worldwide are required to fast when the crescent is sighted in any country. They quoted the general indication of the Hadeeth (narration) in which the Prophet

said: "When you see the crescent, observe fast, and when you see it (again) then break fast." [Al-Bukhari and Muslim] They argued that it is a general address for the Muslim Ummah (nation) as a whole.
A group of the scholars is of the opinion that the people of a given country are not obliged to follow the sighting of other countries. They quoted the Hadeeth narrated on the authority of Kurayb, may Allah be pleased with him, where he said,
"While I was in Shaam, the month of Ramadan commenced. We saw the crescent on the night of Friday. I then returned to Al-Madeenah at the end of the month. ‘Abdullaah ibn ‘Abbaas asked me, 'When did you see the crescent?' I said, 'We saw it on the night of Friday.' He said, 'Did you see it yourself?' I said, 'Yes, and the people also saw it and they fasted and so did Mu‘aawiyah.' He said, 'But we saw it on the night of Saturday. So we shall continue fasting until we complete thirty days or we see it (the new crescent of Shawwal).' I said, Is not Mu‘aawiyah's sighting and fasting sufficient for you?' He replied, 'No; this is how the Messenger of Allah

commanded us.'" [Muslim]
The majority of scholars argued that this Hadeeth is reported concerning a person who started to observe fasting according to the sighting of his own country and then he was informed that the crescent was seen a day before in another country. In this case, he continues fasting along with the people of his own country until they complete 30 days or see the crescent of the next month. This identifies the divergence in this case. Still the opinion of the majority of scholars is the preponderant one, particularly because this matter is very easy today. However, it requires further care from the Islamic countries until it becomes a reality.
Until all the Muslim countries adopt one view in this regard, the people of each country are required to fast when the country officially declares the beginning of fasting, even if this is different from other counties a day before or after. There should be no difference in one country and thus some people fast and others do not fast. This makes the difference so wide. Moreover, when someone sights the crescent alone, he should not fast alone because the Prophet

Sighting the Crescent of Ramadan - I