The Blessings of I'tikaaf 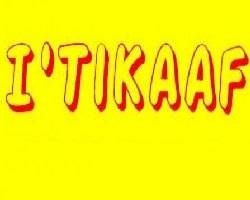 used to stay in I‘tikaaf (seclusion in the mosque) for the last ten days of Ramadan, and when it was the year in which he died, he stayed in I‘tikaaf for twenty days. Regardless of his numerous occupations such as Jihaad (armed struggle in the cause of Allah The Almighty), enjoining good and forbidding evil, teaching knowledge and fulfilling the interests of Muslims, nothing hindered him from staying those ten days in I‘tikaaf to Allah The Almighty. He considered this would be his support, provision and sustenance throughout the remaining days of his year; and a means to enable him to worship Allah The Almighty relentlessly day and night in order to obtain the reward of the Lord. He also considered this a means to attain the Night of Al-Qadr, in relation to which the Messenger of Allah

says: "Whoever stands (in prayer) the Night of Al-Qadr out of sincere faith and seeking the Reward of Allah, his previous sins would be forgiven for him." [Al-Bukhari and Muslim]

These are the activities and duties that people must be engaged in during the last ten days. It is true that the Messenger of Allah

did not need special seclusion because his heart was entirely attached to his Lord, and he never wearied of remembering Allah The Almighty, nor of doing righteous deeds, nor did he get tired or bored of loving, approaching and seeking his Lord. He is in the highest degree among all people in the world and the Hereafter. There is no degree higher than his -- that is Al-Waseelah (intercession) – fit only for one slave, i.e. the Messenger of Allah

. This is why the believers should strive to be in the state in which he was in his high degree, if they like to obtain the same means: to attain the Night of Al-Qadr, to draw close to Allah The Almighty, and to be ready to realize and obtain the reward of the Lord. Do not let worldly occupations and obstacles hinder you from that, for whatever you might be you are not in a degree higher than that of the Prophet

nor are you above the need for gaining forgiveness.
If the devil comes to you to say, "It does not matter if you cannot stay in I‘tikaaf this year. Allah willing, next year, you can stay in I‘tikaaf for one hundred days, if not the whole year, and set out in the way of Allah The Almighty throughout your lifetime", you should know that he is tempting you to leave worship and waste those days on which you should engage in worship day and night.
It was narrated on the authority of both ‘Aa’ishah and Anas, may Allah be pleased with them, that they said: “Whenever the (last) ten (days of Ramadan) came, he (the Messenger of Allah

) would stand the night (in prayer).” [Al-Bukhari and Muslim] He never wearied of standing at night (in prayer) in the hope of witnessing the Night of Al-Qadr on any night of the last ten in general, and the odd ones in particular. He also awakened his family during those ten nights (to perform the night prayers). He awakened those among them who were able to pray, and made them stand in prayer to witness the goodness, mercy and the gifts of forgiveness from Allah The Almighty. He encouraged them to take their due share from the Mercy of Allah, His blessings, munificence, generosity and kindness, especially on those nights. He also used to keep aloof from women during those ten nights, and devote himself to worship more diligently than he did at other any time. In other words, if he was accustomed to sleeping for some time during the twenty nights of Ramadan, in those last ten nights, he did not sleep nor entertain slumber. He folded his bed and kept aloof from women, and stood (in prayer) continuously to Allah The Almighty.
This is how the Messenger of Allah

used to seek the Night of Al-Qadr among those (last ten) nights, approach his affairs concerning the Hereafter, arrange his conditions and hope for what is with Allah The Almighty.