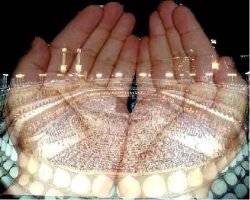 Allah is The Most Rich and The Most Generous

Whatever one asks, Allah The Almighty gives him more. It was narrated on the authority of Abu Sa‘eed, may Allah be pleased with him, that the Prophet,

, said: “‘No Muslim supplicates Allah with a supplication that contains neither sin nor severing kinship ties, except that Allah gives him one of three things: He either answers his supplication, or saves it for him in the Hereafter or diverts an equal amount of evil from him.’ They said, ‘So we shall ask Allah a lot.’ The Prophet

Supplication drives away predestined afflictions as the Prophet,

, said: “Nothing drives away predestined affliction but supplication, and nothing extends one’s life but righteousness.” [At-Tirmithi]
In another Hadeeth, the Prophet,

said, “Some of those who fear Allah used to sit at night, keeping silent, lowering their head, and raising their hands like a beggar. This condition shows how deep the need for Allah is. The more sincere, humble and needy we are in our supplication, the more likely our supplications will be answered.” Al-Awzaa‘I

, said: “Whoever likes Allah to respond to him in times of hardship, let him make much supplication in times of prosperity.” [At-Tirmithi]
Despite the fact that Allah The Almighty created and provided for us, and has no need of us, He is too bashful to disappoint us if we supplicate Him.
Salmaan, may Allah be pleased with him, narrated that the Prophet,

, said: “Allah is modest and generous, and is shy to turn away empty the hands of His slave when he raises them to Him.” [Abu Daawood and At-Tirmithi]
Righteousness is what counts, not strength

There may be a person who is considered insignificant because he is poor and weak, but he may be dear to Allah The Almighty, and He does not ever neglect his supplications, as the Prophet,

, said: “There may be a man with dishevelled hair, driven away from the doors (but he is so pious) that if he were to swear in the Name of Allah, He would definitely fulfill that.” [Muslim]

, said: “The supplication of everyone of you is granted if he does not grow impatient and say, ‘I supplicated but it was not granted.’” [Al-Bukhari and Muslim]
Muwarriq Al-‘Ijli

said, "I was never filled with anger, and I asked Allah for a need twenty years ago but He did not respond, yet I did not cease supplicating Him.”
Our righteous predecessors used to prolong their supplication. Imaam Maalik

said, "‘Aamir ibn ‘Abdullaah ibn Az-Zubayr may begin to supplicate Allah after he finished the ‘Ishaa’ Prayer and did not finish it till Fajr.”
Moosa ibn Ja‘far ibn Muhammad

entered the Mosque of the Prophet,

, then he prostrated in the first part of the night and he kept saying till Fajr, "My sins are great so I beg Your pardon, O you who is worthy of fear and qualified for [granting] forgiveness.”
Muslims should follow the practice of the Prophets in supplication. Imaam Maalik

was asked about the one who says 'O Master', in supplication. He said, "I prefer the prophets’ supplication: O our Lord.”
These days are for supplicating Allah The Almighty
Even though supplication is prescribed at all times, it is more likely to be accepted during the last ten days of Ramadan.  Thus, strive to attain piety during these days of blessing, for the Prophet,

, used to avoid sexual intercourse with his wives (even though it is permissible), to pray the whole night and to wake his family in order to pray during the night during those virtuous days. He used to spend all the last ten nights in worshipping Allah The Almighty, because it includes the Night of Al-Qadr, prayers in which are worth praying more than the whole year for its virtue, so why not seek patience in order to witness  it? They are just a few nights.
Make sure you take advantage of these ten nights. Show your best deeds to Allah The Almighty. You may strive for a few days that will be your path to eternal happiness. Everyone goes through these days: both the hardworking ones and the heedless; but their actions differ, so do not let the devil deceive you, and do not lose opportunities in these days as you may have lost others.

Supplications are Answered during the Last Ten Days of Ramadan – I