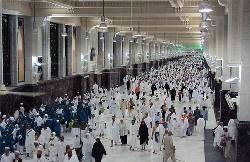 Fourth: Upon finishing Tawaaf (circumambulation), men should cover their right shoulder again (from the position of Idh-Dhtibaa’) and then go behind Maqaam Ibraaheem (the place where Prophet Ibraaheem

stood), if possible, and recite the verse of the Quran (what means): {…Take as your place of worship the place where Ibraaheem stood…} [Quran, 2:125] Then the pilgrim should pray two Rak’ahs there. One may also pray anywhere else in the mosque. During these two Rak'ahs, the pilgrim should recite the Chapter Al-Kaafiroon in the first Rak’ah, having recited Chapter Al-Faatihah, and then in the second Rak'ah recite the Chapter As-Samad. Sadly, many people push and harm others in order to pray behind the Maqaam, although it is permissible to pray anywhere in the Haram.

Sixth: After this, one should climb mount As-Safa and recite the verse of the Quran which states (what means): {Indeed Safa and Marwah are of the symbols of Allah. So there is no harm on him who performs Hajj or ‘Umrah to the house to perform the going (Sa’y) between them. And whoever does good voluntarily, then indeed Allah is All-Recognising, All-Knowing.} [Quran 2:158] and say, "I will start with what Allah The Almighty started with." After this, it is recommended to face the Ka’bah and recite the following:

The pilgrim should repeat this supplication three times and then supplicate with any other desired supplication depending on his inclination.

Seventh: Having carried out these rituals, the pilgrim should descend from Mount As-Safa and begin walking towards Mount Al-Marwah. When one reaches the green marking, men only should walk hurriedly until one reaches the second green marking, then one should walk at a normal pace again until one reaches Al-Marwah. This is considered as one leg of the Sa'y and seven of these are required. This means that one begins their first leg from As-Safa and finally ends at Al-Marwah. There are no special supplications for each round during Sa’y.

There are some common mistakes made by pilgrims during Sa’y:

There are two innovated acts which are widespread among people which you need to be on your guard against:

*  Some people use specific supplications for each round during Tawaaf, as they find it in some booklets they buy to help  them during ‘Umrah.

*  One person takes the lead and loudly utters supplications, and people collectively repeat after him.

Eighth: When the pilgrim finishes the Sa'y, they should either cut or shave their hair. It is recommended for men that they shave their hair, unless they are about to perform Hajj soon after their ‘Umrah, in which case it is better to simply cut their hair and postpone the shaving until after Hajj. It is not sufficient to cut only parts of the hair; the hair on all parts of the head must be cut. Women should gather their hair and cut a tiny piece from the end of their hair collectively. By this one would have concluded their ‘Umrah.

Some people mistakenly think that they may repeat the ‘Umrah. However, this was neither the way of the Prophet

; had it been something virtuous, they would certainly have done it.