Sequence of the Rituals of Hajj and â€کUmrah - II 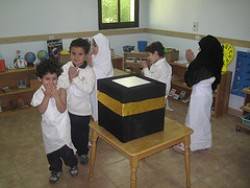 After you perform Salah (prayer), you should face the Qiblah (direction of prayer) and pronounce Takbeer (saying "Allahu Akbar" Allah is the Greatest), praise Allah The Almighty and supplicate to Him until daylight. You should then move on to Mina before sunrise and pick up seven pebbles. Then you should go to Jamrah Al-‘Aqabah and throw the seven pebbles after sunrise, saying Takbeer while throwing each pebble, while feeling submissive to and humble before Allah The Almighty. You should know that the aim of throwing pebbles is to remember Allah The Almighty. The pebbles should fall within the wire fence, and it is not necessary that the pebbles hit the stone column. When you finish throwing the pebbles, you should slaughter your Hady (the animal offered for sacrifice, seeking the pleasure of Allah The Almighty).

The same conditions of Udh-hiya (animal sacrificed on ‘Eid Al-Adha) apply to the Hady. A pilgrim may commission a person to slaughter the Hady on his behalf. You should then shave your entire head after the slaughtering. It is not lawful to shave a part of the head and let another part be unshaved. Women should cut as much as a fingertip from the end of their hair. By doing so you will be in the first, minor Tahallul (being partially free from the restrictions of Hajj). Now you may wear regular clothing, clip your fingernails and apply perfume, but you still cannot have sexual intercourse with your spouse.

Then you should go to Makkah before Thuhr. Here you will make Tawaaf for Hajj, followed by Sa’y. Having done this, you should then return to Mina. It is with Tawaaf, Sa’y, throwing pebbles and shaving your head that you will be in the state of the second Tahallul (major release). After the second Tahallul, you are permitted to do all things you were previously forbidden to do due to being in the state of Ihraam, including having intercourse with your spouse.

A pilgrim is supposed to perform four rituals on the day of `Eed: throw the pebbles, slaughter a sacrificial animal, and shave their head (for men), then perform Sa’y and Tawaaf. This is the perfect order of rituals. If you do any of the rituals before the other, such as shaving the head before slaughtering, making Sa’y and Tawaaf after leaving Mina, or delaying slaughtering until the thirteenth of Thul-Hijjah in Makkah, your Hajj will still be valid, especially if you have a legitimate excuse for not following the proper sequence of proceedings. You should spend the night of the eleventh day of Thul-Hijjah in Mina. When the sun passes its zenith i.e. around noon, you should throw the pebbles at the three positions of the Jamaraat, starting with Al-Jamrah Al-Ula (As-Sughraa), then Al-Jamrah Al-Wusta, then Jamrah Al-‘Aqabah (Al-Kubraa), throwing seven pebbles at each. You should say the Takbeer following each throw. The time of throwing stones on the Day of the `Eed begins from sunrise for the physically fit people. The weak, however, may throw the pebbles from the latest hours of the night of the first day of `Eed until sunset. It can be made after the `Eed after the sun passes its zenith until the sunset. It is not permissible to throw stones before the sun passes its zenith. It is permissible, however, to throw the stones at night, if it is too crowded during the day.

If a pilgrim cannot throw pebbles in person, due to their extreme youth or old age, or due to illness, he may commission another person to throw pebbles on his behalf. It is lawful for the commissioned person to throw pebbles for himself as well as for the person who deputized him at the same instance, but he should begin with himself. Having thrown the small stones on the twelfth day of the month of Thul-Hijjah, your Hajj is completed. The pilgrims, at this point, have the option either to hurry and leave, or to stay and spend the night of the thirteenth day and throw stones at the three Jamaraat after the sun passes its meridian (noon). The latter is preferable because it is in agreement with the actions of the Prophet