Fasting on Mondays and Thursdays Voluntarily 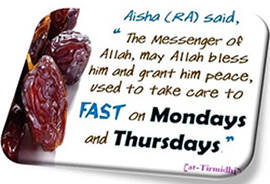 My question is plain and simple: I want to know whether fasting on Mondays and Thursdays is the Sunnah, or is it sufficient to fast two days weekly in order to follow the Sunnah of the Prophet

? Indeed, during the summer vacation, I fasted every Monday and Thursday regularly, but with the beginning of the new academic year my study times have changed and I cannot fast on those two days because I have many classes to attend on them. I hope you have understood what I mean.

All perfect praise be to Allah, the Lord of the Worlds. I testify that there is none worthy of worship except Allah, and that Muhammad

We ask Allah to grant you success and help you. You should know that voluntary fasting is of several ranks, and a slave of Allah has to do his/her best as much as he/she can to ascend in ranks. Indeed, fasting has no equal (i.e. in reward and benefit) as stated in a Prophetic narration. The best fasting is that of Prophet Daawood (David), may Allah exalt his mention, who would fast every other day, as stated in an authentic Prophetic narration.

At the very least, a Muslim should keep three fasts monthly. It was narrated on the authority of Abu Qataadah, may Allah be pleased with him, that the Prophet

said: “[Fasting] three days every month and [the fasting of] Ramadan to Ramadan are [as good as] perpetual fasting.” [Saheeh Muslim]

There is no doubt that fasting on Mondays and Thursdays is superior and that no other days could stand in their position, for the Prophet, sallallaahu ‘alayhi wa salam, favored them over other days by fasting on them. In justifying his fasting on them very often, he informed us that a person’s deeds are shown to Allah The Almighty on these days, according to the narration by At-Tirmithi on the authority of Abu Qataadah, may Allah be pleased with him; and An-Nasaa'i on the authority of Usaamah, may Allah be pleased with him.

Therefore, we advise you to do your best fast on them, and be sure that Allah will make it easy for you to fast them, by His bounty. However, if you fast any other days, except for Friday solely or Saturday solely, then this would nonetheless be a good deed for which you would be rewarded.

Regardless of not having the same superiority as fasting on Monday and Thursday, fasting on any other day is included under the many Prophetic narrations that speak of the excellence of voluntary fasting. It would be sufficient to relate this Hadeeth narrated on the authority of Abu Umaamah, may Allah be pleased with him that the Prophet, sallallaahu ‘alayhi wa salam, said: “Observe fasting, for it has no equal.” [An-Nasaa'i]