Why Islamic History - I 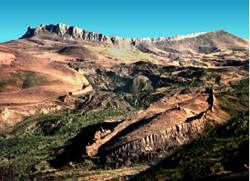 The great Indian Islamic scholar and historian Abu Al-Hasan ‘Ali An-Nadwi observes, like other sages of Islam have before, that Islam, being the last and universal religion of Allah, has a unique history of internal revival, reform and self-rejuvenation.

Allah Almighty sent the message of Islam at a chosen moment in the development of human history where the technological, scientific and intellectual understanding of humanity as a whole was reaching a stage of final maturation and ripening. Instead of geographically confined nations and tribal systems which all received their own messengers from Allah, the humanity was now ripe for one, universal, perfected and final message of Allah.

The development of the Islamic Ummah (Islamic Nation) in history was amazingly rapid. It was full of trials and tribulations and encounters with other cultures and religious systems. As a result, the final message of Allah was embodied in a civilization that was enriched by all the great civilizations of the world. Within the first century of its birth, Islam spread across half the known and majority of the civilized world of that time. As different people became Muslims or came under the rule of Islam, the scholars and thinkers of Islam came from increasingly diverse regions, thus enriching the flowering and protection of Islamic scholarship and tradition with their own cultural strengths. The contributions of the Persians in bureaucracy and culture, the Hindus in mathematics, the Greeks in logic, the Turks in military and architecture fields, just to name a few, all became sources of strength of Islam. On the other hand, the previous philosophical and religious systems of the new lands both challenged and influenced the Muslim scholars and thinkers. All these factors make the history of Islam extremely fast-moving, diverse and filled with conflicts, debates and upheavals. Each of these experiences, however, also helped it mature and develop.

Whenever the Ummah of Islam faced a new danger, internal or external, Allah Almighty raised among the Muslims scholars, leaders and groups who protected the true religion of Allah Almighty and revived it in its true, pristine form. This ubiquitous phenomenon is known to the historian as revivalism or tajdeed.
The Ummah of Islam, with its preserved source-texts (the Quran and the Hadeeth), scholarship and legacy, has survived all its enemies only because of the special Divine arrangements. In history, this protection and guidance of Allah Almighty has been actualized in the form of the rise of great scholars and leaders, fields of scholarship like the sciences of the Quran, of Hadeeth, of jurisprudence and its principles, the preservation of the Arabic language and so on.

Today, the Muslim Ummah faces great challenges from all sides. But an observer of Islamic history recognizes that the situation is neither new nor hopeless: in fact, these trials and challenges are part of Allah's plan to take the Ummah of Islam and the message of Islam up to a new level of strength and recognition in this world.

To learn Islamic history is to inquire how Allah's ways have worked and His will carried out at the hands of myriads of individuals and groups and how His promises have come true. To look at history Islamically is to keep an eye on the moral, spiritual and ethical dimensions of all episodes in history, however big or small. This is precisely why the Quran makes learning history in some ways an act of faith and a source of wisdom.

Reasons from the Quran

Just as the food we eat constitutes our bodies, our history constitutes our minds. Our ideas, concepts, sentiments, and preferences, in short, what makes us human, is largely a result of our past experiences. Individuals, peoples, institutions, or nations, all acquire their particular nature or identity primarily because of their unique histories. We cannot know ourselves without knowing where we have been and come from. Not knowing where we come from leaves us without our sense of selfhood. Loss of identity leaves us without a purpose, like a ship without destination, at the mercy of merciless winds. This loss of identity has been mentioned in the Quran as a punishment from Allah. He Almighty Says (what means): {And be not like those who forgot Allah, so He made them forget themselves...} [59: 19]

People who forget who they were may forget who they ought to be. This leads to self-deceit and arrogance. Allah Almighty reminds every human being again and again of his or her individual ‘history,’ to shake them up from their disbelief and arrogance. Allah Says (what means): {Had he not been a sperm from semen emitted? Then he was a clinging clot, and [Allah] created [his form] and proportioned [him]. } [Quran 75:37-38) {Does man not consider that We created him from a [mere] sperm-drop – then at once he is a clear adversary?} [Quran 36:77]

In the chapters of Al-Feel and Quraysh, Allah Almighty reminds the people of Quraysh of his favors upon them in the past, encouraging them to learn moral lessons from their history. He Almighty Says (what means): {Have you not considered [O Muhammad], how your Lord dealt with the companions of the elephant?} [Quran 105:1] And {For the accustomed security of the Quraysh – Their accustomed security [in] the caravan of winter and summer – Let them worship the Lord of this House, Who has fed them, [saving them] from hunger and made them safe, [saving them] from fear.} [Quran: 106]

Allah Almighty repeatedly commands the Muslims in the Quran to observe, consider, and reflect upon the lessons from the history of bygone nations. Instructing the Muslims in moral and spiritual history of the earlier nations seems to be one of the major emphases of the Quran. The fact that majority of Allah's Final Message consists of stories of moral struggle of earlier peoples is an indication of the significance of learning history, and learning it with the right perspective of seeking lessons. Following are a few lessons that can be drawn from the Quranic perspective on history.

(ii) Moral-spiritual interpretation. While modern historians focus on different dimensions of history and offer different bases for the interpretation of history based on their respective belief systems, the basis of Quranic storytelling is emphatically moral and spiritual. In other words, Allah Almighty demands of us to look first and foremost at the moral aspects of a nation's history. Nations fall, for example, not due primarily to economic failures, but due to the moral-spiritual failure to properly dispense economic justice based on the correct belief in and obedience to Allah Almighty. In the chapter of Al-‘Araf, after relating several stories of encounter between the truthful Prophets, may Allah exalt their mention, of Allah and their disbelieving people, Allah Almighty summarizes the lessons of these stories by saying (what means): "And if only the people of the cities had believed and feared Allah, We would have opened upon them blessings from the heaven and the earth; but they denied [the messengers], so We seized them for what they were earning." [Quran 7:96]

(iii) Learning moral lessons from history is an obligation. The cause of the downfall of nations one after the other in the aforementioned verse [7:96] is that they neglected the moral lessons of the history of their forefathers, and thought that the same does not apply to them. Allah Almighty Says (what means): {And what prevented the people from believing when guidance came to them except that they said, ‘Has Allah sent a human messenger?’ Say, ‘If there were upon the earth angels walking securely, We would have sent down to them from the heaven an angel [as a] messenger.’} [17:94-95]

(iv) History is the best way to teach and caution. The Quran could have been a book of abstract theories of laws that govern societies, or simply a list of do's and don'ts. But the fact that our Creator, the Most Wise, has chosen story telling as a chief means to caution and education of the humankind necessarily means that humans have a propensity to learn from other's examples. Successful teachers and preachers of Islam always have a good grasp of history.

(v) History of all humanity is relevant. By Islamic history, we often mean the history of Muslims. But the Quran is full of history of rebellious nations. We conclude that so long as the framework of history is Islamic (i.e., moral spiritual), no part of human history is irrelevant to the believers.

(vi) History repeats itself. It has become a cliché that history repeats itself. This is true inasmuch as all struggles of good and evil are bound by the universal Sunan (principles) established by Allah Almighty. In order to show the Muslim 'Ummah its potential failings, the Quran focuses on the moral stories of the Children of Israel, for they were, as some scholars have observed, `the ex-Muslim Ummah.'

(vii) Systematic learning of the science of history is a requisite. The Quran, the Final Message of Allah Almighty, is a book of guidance and contains all foundational principles and general moral exhortations that will suffice all those who seek Allah Almighty till the Day of Judgment. The Quran is not a book of history, and the way it tells stories presumes that the audience has some knowledge of the history being told. If the Quraysh, for instance, did not know the something about the history of ‘Aad, Thamood and the destruction of the army of Abrahah and his elephants, the Quranic references to these incidents would make little sense to them. The Quran provides the moral interpretation to the human drama of life and gives many instructive examples. But it is an obligation of Muslims to learn as accurately and objectively as possible the facts of history so the Quranic principles could be correctly applied, since fulfilling the requisites of an obligation is an obligation itself. To learn objectively the science of history, therefore, is part of Islamic obligation upon the Muslim Ummah, without which they cannot fully benefit from the message of the Quran.