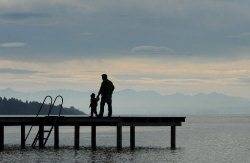 People who were hit or spanked as children face higher odds of mental ailments as adults, including mood and anxiety disorders and problems with alcohol and drug abuse, researchers said Monday.

The study, led by Canadian researchers, is the first to examine the link between psychological problems and spanking, while excluding more severe physical or sexual abuse in order to better gauge the effect of corporal punishment alone.

Those who were spanked or hit as kids were between two and seven percent more likely to encounter mental issues later, said the research in the US journal Pediatrics, based on a retrospective survey of more than 600 US adults.

That figure may seem low, particularly since about half of the US population recalls being spanked in childhood, but nevertheless shows that physical punishment can raise the risk of problems later on, experts said.

"The study is valuable because it opens the conversation about parenting," said Victor Fornari, director of the division of child and adolescent psychiatry at North Shore-Long Island Jewish Health System in New York.

The rate "is not dramatically higher, but it is higher, just to suggest that physical punishment is a risk factor for developing more mental disturbances as an adult," said Fornari, who was not involved in the study.

Previous research has repeatedly shown that children who were physically abused as youngsters suffer from more mental disturbances as adults, and are more likely to engage in aggressive behavior than kids who were not hit.

But these studies have typically included more serious abuse.

Instead it focuses on "harsh physical punishment," defined as pushing, grabbing, shoving, slapping or hitting as a form of punishment from elders.

While 32 nations around the world have banned corporal punishment of kids, the United States and Canada are not among them.

Using a nationally representative survey sample of 653 Americans, they found that those who recalled experiencing harsh punishment as children faced higher odds of a range of mental problems.

Between two and five percent of disorders like depression, anxiety, bipolar, anorexia or bulimia were attributable to physical punishment as a child, the study said.

From four to seven percent of more serious problems including personality disorders, obsessive-compulsive disorder and intellectual disabilities were associated with such punishments in childhood.

Researchers stressed that the study could not establish that spanking had actually caused these disorders in certain adults, only that there was a link between memories of such punishment and a higher incidence of mental problems.

The survey data came from the National Epidemiologic Survey on Alcohol and Related Conditions collected between 2004 and 2005, and included adults over age 20.

Participants were asked: "As a child how often were you ever pushed, grabbed, shoved, slapped or hit by your parents or any adult living in your house?" Those who answered "sometimes" or greater were included in the analysis.

Roya Samuels, a pediatrician at Cohen Children's Medical Center in New York, said the parents' genes may influence both their response to raising an unruly child as well as their likelihood of passing down certain ailments.

"Parents who are resorting to mechanisms of corporal punishment might themselves be at risk for depression and mental disorders; therefore, there might be a hereditary factor going on in these families," she told AFP.

Future research could shed more light on the issue. In the meantime, the study offers a reminder that other disciplinary options such as positive reinforcement and removing rewards are viewed more favorably by doctors.

"The reality is, if 50 percent of the population has experienced being spanked in the past year, most kids are resilient. It is just that there are better ways for parents to discipline kids than spanking," Fornari said.

"And for some vulnerable kids, the spanking may increase their risk for the development of mental disturbances. So for those reasons it is important to really minimize or extinguish physical punishment."

The American Academy of Pediatrics opposes striking children for any cause and the Canadian Pediatric Society recommends that doctors strongly discourage the use of physical punishment.