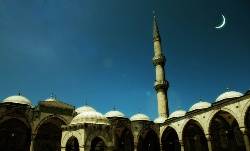 Ramadan is around the corner, the great month the Muslims wait for with passion and yearning, with longing and tears -- tears of pleasure at receiving the dearest and most generous of months.

Congratulations on the coming of the month of good things, the month of the dutiful acts, and the month of pleasures, in which Allah The Almighty boasts before His angels of you, and looks at your competition in it.

These are the seasons that have come to exude their pleasant scent among the people. They are seasons to obtain good deeds and reduce misdeeds. So, O seeker of goodness, come forward [to do good]! O seeker of evil, desist [from evil]!

said: "When the first night of Ramadan comes, the gates of Hell are locked and none of them is opened; the gates of Paradise are opened and none of them is locked, and the devils and the strong Jinns are chained in fetters; and a caller calls out, 'O seeker of goodness, come forward (and perform acts of goodness diligently), O seeker of evil, stop (and repent for it is time to repent).' Some are freed from Hell by Allah, and that happens every night." [Al-Bukhari and Muslim]

My brothers and sisters in (the religion of) Allah:

Ramadan was the wish of your beloved, Muhammad

who said: "O Allah! Bless us in Rajab and Sha’baan, and make us live until we witness Ramadan." The righteous predecessors

used to supplicate their Lord for six months to accept their deeds of the last Ramadan, and another six months to convey them to the next Ramadan. Where do we stand with regard to the first generation, may Allah be pleased with them?

Welcome to you, O master of the months! The Messenger of Allah

said: "The month of Ramadan has come upon you. It is a month of blessing, in which Allah covers you with His mercy, plots out sins, and responds to supplication. He looks at your competition in it, and shows pride to His angels in you. So, show Allah good from yourselves, since the wretched is he who is deprived of Allah's mercy." [At-Tabaraani]

In it, the people are of two kinds: one receives Ramadan with laden tables, varieties of food and drink, and spends the greatest part of his day sleeping, and the greatest part of his night wandering. The other kind of people receives Ramadan by returning to Allah The Almighty, repentance, seeking forgiveness, and abandoning what is forbidden by Allah The Almighty of disobedience, especially during the month of mercy, forgiveness and release from Hellfire.

Righteousness is indeed the wisdom for which fasting has been ordained, as stated by Allah The Almighty (what means): {O you who have believed, decreed upon you is fasting as it was decreed upon those before you that you may become righteous.} [Quran 2:183] Tongues fast from cursing and uttering obscenities and lewd speech, and ears fast from hearing obscene words; eyes fast from looking at what is unlawful, and hearts are devout in worship, seeking Allah The Almighty; and the great loss is to come out of Ramadan without increasing our good deeds nor being promoted in rank with Allah The Almighty. That is indeed the evident loss.

The profitable winner, by the permission of Allah, is he who fasts in compliance with the command of Allah The Almighty, and prevents the soul from [unlawful] inclination. Then, indeed, Paradise will be his refuge. Thus, the reward will be great and the gift abundant.

It is narrated by Ibn Abi Ad-Dunya

and others on the authority of ‘Abdullaah ibn ‘Amr ibn Al-‘Aas, may Allah be pleased with him, that he said, “The Messenger of Allah

) said: ‘Then, they will be permitted to intercede.’"

So strive your utmost to recite the noble Quran during the approaches of the night and the ends of the day, because the Quran will be a witness, either for or against you. It is due on us to receive the goodness by performance of good deeds and through abandonment of evildoings and destructive habits. It is also due on us to maintain kinship ties and to be dutiful to our parents, which pleases the Most Merciful and admits one to Paradise in the company of the Prophet Muhammad Al-Mustafa

It is the month of goodness, giving, dutifulness and abundance of good. It is the month of munificence, generosity, and spending in the cause of Allah. Therefore, do not forget your brothers and sisters from among the poor, needy, widows and orphans. By Allah, many nights may come upon some people, during which they find no morsel with which to break their fast, or a sip of drink to rely on in their fasting, whereas you are blessed in good things and gifts. So, show Allah The Almighty good from yourselves.

It is narrated on the authority of ‘Abdullaah ibn Mas‘ood, may Allah be pleased with him, that he said, “The Messenger of Allah

said: ‘Who among you considers the wealth of his heirs dearer to him than his own wealth?’ They replied, “O Messenger of Allah! There is none among us except that he loves his own wealth more." The Prophet

said: ‘So his wealth is whatever he spends (in the cause of Allah) during his life (on good deeds) while the wealth of his heirs is whatever he leaves after his death.’" [Al-Bukhari]

never used to give a beggar either a piece of bread, or a broken thing, or a patched garment. He used to say, "I feel shy that my book will be read before Allah, having in it those trivial things I gave for His sake."

We ask Allah The Almighty to make abundant and blessed our share from this noble month, to endow us with forgiveness and mercy and with a garden in Paradise whose breadth is like the breadth of the heavens and the earth; not to make our share only hunger and thirst, and not to make us of those in connection with whom the honored Messenger

said: "and the wretched is he who has been deprived of the forgiveness of Allah in this noble month."