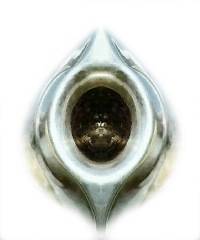 When the Ka'bah collapsed in 1039 A.H. because of a heavy flood and the Ottoman Sultan Muraad ordered its reconstruction, Imaam Ibn ‘Illaan Al-Makki witnessed this event and recorded in details the stages of rebuilding it. He saw the Stone and said, 'The color of the part of the Stone embedded in the walls of the Ka'bah is as white as the stone of Al-Maqaam. Its length is half a cubit and its width is one third of a cubit. Some parts of it lost about a Qeeraat and its thickness is four Qeeraats and there are silver straps around it…the Stone consists of about thirteen fragments; four are large and the others are smaller compared to them. A compound was made in order to glue the broken parts together.”

Muhammad Taahir Al-Kurdi (d. 1400 A.H.), a historian and calligrapher, shed light on the status of the Black Stone fifty years ago, saying,

"The visible part of the Black Stone in our time [middle of the fourteenth century after Hijrah] that we touch and kiss consists of eight small pieces of different sizes, the largest piece is the size of a date. They fell off the Stone during the aggressions made by some ignorant transgressors in the past. Fifty years ago [early fourteenth century after Hijrah], there were fifteen visible pieces. However, they decreased because of the modifications in the frame of the Black Stone. The pieces which became small and thin were mixed with wax, musk and amber and placed on the Stone."

This was confirmed by ‘Ubayd Al-Hal Al-Kurdi

the author of Al-Ka'bah Al-Mu‘aththamah wal-Haramaan Ash-Shareefaan, the historian of the expansion of Al-Masjid Al-Haraam and the Prophetic Mosque and the restoration of the Ka'bah. He stated in his book which was issued in 1419 A.H.- 1999 A.D. that the Black Stone could not be described because only eight small pieces were visible, then he quoted the aforementioned narration of Al-Kurdi.

The Qaraamitah had a dark history with this honorable Stone about which Ibn ‘Abbaas, may Allah be pleased with him, said, “The Rukn (Black Stone) and the Maqaam are two rubies from Paradise that will return to it. Had not the impure people touched this Stone, it would have cured the lepers and those who were born blind.”

About 1107 years ago, the Black Stone underwent the most heinous incident in Muslims’ history when Abu Taahir, the Qarmati, Sulaymaan ibn Abi Sa‘eed, led the attack against the Sacred House of Allah in 317 A.H.

The Qaraamitah had an esoteric ideology and are attributed to a man from Koofah called Qarmat who called for atheism and explicit disbelief. Hence, the Abbasid Caliph AL-Muktafi Billaah ordered him to be killed in 293 A.H.

Muhammad Saa’id Bikdaash a contemporary historian living in Madeenah, mentioned the famous story of the Qaraamitah with the Black Stone in his comprehensive book Fadhl Al-Hajar Al-Aswad as taken from history reference books and verified it,

"On Monday, eighth of Thul-Hijjah, people were taken aback by the enemy of Allah, Abu Taahir Al-Qarmati with nine hundred men. They swept into Al-Masjid Al-Haraam, killed a large number of pilgrims and blocked the Zamzam well with their corpses. He killed about thirty thousand people in the streets of Makkah and did heinous acts. Then he came to the Black Stone and struck it with a pickax and took it out of its place after ‘Asr prayer on Monday, fourteenth of Thul-Hijjah and carried it away with him to his town, Hajar, (currently, Bahrain and the eastern region of Saudi Arabia). It is said that forty camels died after carrying the Black Stone in this journey. He wanted to move Hajj to his land, but he failed like Abrahah who lost and failed before him."

The Qaraamitah kept the Black Stone for twenty-two years in their lands after building a new Ka'bah for it. They refused to return it to Makkah and did not accept the offer of returning it for fifty thousand dinars. The place of the Black Stone remained empty. Pilgrims used to touch its place crying and beseeching Allah The Almighty to return the Black Stone to its place.

After the death of Abu Taahir Al-Qarmati in 332 A.H., Muslims were surprised on the Day of Nahr (‘Eed Al-Adh-Ha, Tuesday, tenth of Thul-Hijjah) in 339 A.H. to see the Qarmati leader, Sunbur ibn Al-Hasan Al-Qarmati, bringing the Black Stone back to Makkah. It is said that it was brought on the back of a lean young camel that became fatter after carrying it. He unveiled the Stone in the yard of the Ka'bah in the presence of the Emir of Makkah. There were silver bolts holding the Stone to control cracks that resulted from the removal. He brought plaster along to fix it in its place. Sunbur placed the Black Stone in its place with his hands and the artisan supported it with plaster. When Sunbur returned the Stone, he said, “We took it by the power of Allah and bring it back by the will of Allah.” The people looked at the Black Stone, scrutinized it, kissed it and praised Allah The Almighty.

It is said that the Qaraamitah tried to deceive the Muslims by giving them a similar stone. However, they were surprised when the head of the Makkan delegation accepted to test the stone by asking for water as the Black Stone floats, unlike other stones. The head of the Qaraamitah was amazed and kept saying, “This religion is accurate.”