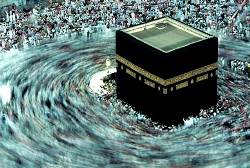 The sanctity of Makkah as well as the sublime position of the Ancient House is clear even to those who possess modest knowledge and insight. This is clarified in many Quranic verses and Prophetic Hadeeths (narrations). Scholars have also stated this in their books, their rites and in the books of Tafseer (exegesis). Thus, there is no ambiguity on this issue and all praise is due to Allah for this.

Nonetheless, the following points are worth remembering:

First: In the Noble Quran, Allah The Almighty Says (what means): {Indeed, the first House [of worship] established for mankind was that at Makkah - blessed and a guidance for the worlds. In it are clear signs [such as] the standing place of Ibraaheem (Abraham). And whoever enters it shall be safe. And [due] to Allah from the people is a pilgrimage to the House - for whoever is able to find thereto a way. But whoever disbelieves - then indeed, Allah is free from need of the worlds.} [Quran 3: 96-97]

In these verses, Allah The Almighty clarifies that the Ancient House is the first House of worship established for humankind and that it is blessed and a guidance for the worlds. These are actually great indicators of the honored and exalted position of this House. Abu Tharr, may Allah be pleased with him, narrated that he said, ‘O Messenger of Allah! Which mosque was first built on the surface of the earth?’ The Prophet

answered: ‘Al-Masjid Al-Haraam (the Sacred Mosque in Makkah).’ He said, ‘Which was built next?’ He

replied: ‘Al-Aqsa Mosque (in Jerusalem).’ He said, ‘What was the period of time between the two?’ He said: ‘Forty years.’ He said, ‘Which was built next?’ He

said: ‘Wherever (you may be, and) the prayer time becomes due, perform the prayer there, for it is a place of prayer.’" [Al-Bukhari and Muslim]

Third: This Ancient House is the best and first house established for worship. It is a blessed House since Allah The Almighty distinguished it by the acts of circumambulation and worship. All these actions are means to expiate sins and forgive misdeeds. Allah The Almighty Says (what means): {And [mention] when We made the House a place of return for the people and [a place of] security. And take, [O believers], from the standing place of Ibraaheem a place of prayer. And we charged Ibraaheem and Ismaa‘eel, [Saying], "Purify My House for those who perform Tawaaf (circumambulation) and those who are staying [there] for worship and those who bow and prostrate [in prayer]."} [Quran 2: 125]

Allah The Almighty has made the House a place of return for people to which they will always want to come and never feel unwillingness to go there. Rather, as soon as they return, they would love to come again, since Allah The Almighty has implanted love for this House and willingness to go to it within the hearts of the believers. There they experience great benefits, their ranks are exalted, the reward of their good deeds is multiplied and their misdeeds are forgiven.

Fourth: Allah The Almighty has made His Ancient House a safe place where people find safety and security. It is a safe sanctuary where even game is safe from being chased or killed, although it is lawful for Muslims to do so outside the sacred precincts of Makkah. Allah The Almighty Says (what means): {And whoever enters it shall be safe.} [Quran 3: 96]

The verse, however, does not mean that harm, killing, and so on, does not happen in this place. Rather, it means that safety and security must be granted to whoever enters it and no one is allowed to afflict it with harm. It was a practice during the pre-Islamic era that a person would encounter someone who had harmed him, even a person who had killed his father or brother for instance, but without afflicting him with harm unless he was outside the sacred sites.