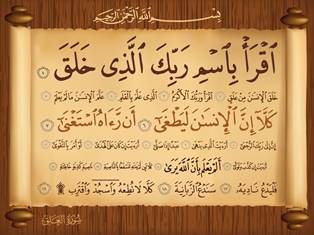 Desertion of the Quran and its types:

First: Desertion of hearing, believing and listening to the Quran. You find some Muslims today listening to all radio stations and becoming addicted to songs and vain talk. Nevertheless, when one suddenly hears the Quran, he turns off the radio. We seek refuge in Allah from loss.

Second: Desertion of referring judgment to the Quran in all rulings of religion (major or minor). Some people refer judgment in disputes and quarrels to man-made laws or tribal traditions and customs.

Third: Desertion of reflection, understanding and knowing what is meant by Allah. There are many who recite the Quran while the Quran curses them.

Fourth: Desertion of seeking remedy and recovery from all diseases in the Quran. A person may resort to all means of recovery except the Quran, out of negligence and desertion.

Fifth: Desertion of applying it and not paying attention to what has been described as lawful or unlawful by the Quran, even if the person recites it and believes in it.

There is no wonder, for the earth had indeed witnessed a great birth by the revelation of the Quran to Muhammad

. The Quran showered the earth with its light and revived it. The Quran was revealed to the Arabs. Although they were eloquent, they felt weak before the great perfection of the Quran. They, therefore, surrendered to its eloquence, their hearts were attached to it and their souls were attracted to the inimitability of the Quran.

Where is the effect of the Quran on the souls of the contemporary people? Some Muslims make a barrier between themselves and the Quran and, therefore, they no longer listen to it. Even, they made a barrier between them and all types of goodness. They are like those who put their fingers in their ears in order not to hear the truth. One thinks that when he hears, he will not be excused and he will no longer enjoy his lusts and desires. Such a poor person does not know that perhaps he hears even one verse or Hadeeth and this will be the reason for him to gain freedom. Such a person has a captured heart and the capture of hearts is a greater matter than the capture of the physical body. There are many who are captives of desires and lusts, and therefore they do not taste the sweetness of faith or the pleasure of reading the Quran.

Perhaps listening to goodness saves you and grants your soul eternal happiness. Hence, you have to open your heart. Allah Has Given you ears to hear; so, do not block them. He Has also Given you a mind to think; so, do not make it heedless by following fancy. Here is the example of At-Tufayl ibn ‘Aamir Ad-Dawsi, May Allah Be Pleased with him, who came to Makkah at the beginning of Islam. The people of the Quraysh warned him against meeting the Messenger of Allah

. They said to him: "Muhammad separated our community and disunited us. His words are like magic. So, you should avoid him lest he should afflict you as well as your people in the same way as he did with us.” At-Tufayl, May Allah Be Pleased with him, said: “They continued warning me until I decided neither to hear anything from him nor to talk to him. Finally, I decided to put cotton in my ears in order not to hear him. In the morning, I went to the Ka‘bah and there was the Messenger of Allah

standing for prayer. I stood near him and Allah Made me hear some of what he was saying. I heard good words and therefore I blamed myself and said: “I am a seasoned man and poet and I can distinguish between good and evil. By Allah, I will hear from him. If he is right, I will accept from him; otherwise, I will avoid him." Then he removed the cotton from his ears and heard the best words from him. He then said: “I have never heard better or fairer words.” The words of the Quran, therefore, were the reason behind his happiness in the two worlds when he opened his hearing and mind before them. They greatly influenced his soul and warm whispers penetrated deeply within his mind and heart bearing the guidance of the Quran. Allah The Almighty Says (what means): {[This is] a blessed Book which We Have Revealed to you, [O Muhammad], that they might reflect upon its verses and that those of understanding would be reminded.} [Quran 38: 29]

Here is also the example of another man who was a tyrant during the pre-Islamic era and harsh with the weak Muslims at that time. He heard the verses in which Allah The Almighty Says (what means): {Ta, Ha. We Have not Sent down to you the Quran that you be distressed………Indeed, I Am Allah. There is no deity except Me, so worship Me and establish prayer for My remembrance.} [Quran 20: 1-14]

These verses broke the barriers of Shirk in his heart and melted the rocks of ignorance. Therefore, he said: “It does not befit The One Who Says that to worship others beside Him.” That man became when he walked in a road, the devil would walk in another road. He is Al-Faarooq, ‘Umar ibn Al-Khattaab, May Allah Be Pleased with him, the second Caliph for Muslims. Allah The Almighty Exalted the religion of Islam with ‘Umar, May Allah Be Pleased with him.

was among them, as some may think. Had it been only for that, the message of Islam as well as the Islamic call would have ended with the death of the Messenger of Allah

. Rather, there was another reason that the Companions, May Allah Be Pleased with them, drunk from the spring of the Quran, adjusted themselves with it and absorbed it, although there were different cultures at that time.

Another reason which urged the Companions, May Allah Be Pleased with them, to reach such an extent of virtuousness and nobility is that they used to read the Quran in order to implement it within themselves as well as within the communities in which they lived. They were like soldiers who receive orders in the battlefield.

O nation of the Quran, know that the Quran does not grant its treasures except for those who come to it with that spirit, the spirit of response and implementation. When the verse of prohibiting wine was revealed, a man walked in the streets of Al-Madeenah to announce that wine has been forbidden. What happened thereafter? Each one who had a cup of wine in his hand threw it away.

Even, each one who had the cup of wine on his lips spilled it out. Those who had jars of wine spilled them, in response and obedience to the Command of Allah.

We ask Allah to Make us obedient to Him and quickly respond to Him. We also ask Him to Grant us understanding of the Quran, contemplating it and acting accordingly!