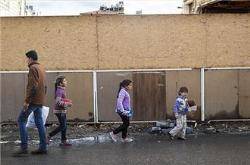 On a bustling street in this city near the border with Syria, a tiny boy among other children tries to sell chocolate biscuits in a box. "Would you buy one?" he keeps asking, while pulling his loose, dirty trousers up to his thin waist.

Seven-year-old Atman Khalil is the youngest member of his family, having fled its war-torn hometown of Tariq al-Bab, in Aleppo, to take refuge in Turkey. Khalil's father is sick, and the family now depends on the children to provide for them.

With his 10-year-old sister Aysha, and cousin Suad Khalef, each child earns around $10 if they can sell all their biscuits.

"Three-thousand Syrian pounds ($20) a week, more than enough to provide [for] all [the] family in Syria. Here, [it's] not even [enough] to afford bread costs," says Suad's mother, Arifa Al Khalef.

The Khalil and Khalef families are only two of countless Syrian refugee families now living in Turkey.

Turkey's Disaster & Emergency Management office (AFAD), the government body responsible for Syrian refugees in Turkey, estimates that the number of Syrians in Turkey exceeded 900,000 as of April 2014. Approximately 220,000 live in refugee camps, while others are scattered in cities across the country.

Many Syrian refugees do not speak Turkish, making finding a job difficult. They also do not have legal status to work in Turkey, meaning that many end up in the informal labor market.

In the span of about two weeks, Al Jazeera met with nearly one hundred Syrian families in five different Turkish cities. Every family either had at least one child, aged between seven and 18, working, or else all the family members were unemployed.

"There are more than 80,000 children among the Syrian refugee population in Turkey who have had to leave school. Out of economic reasons, a lot of these children ended up working and became the [bread-earners] of the family," Abulaban said.

Umran Khilal, 12, and Hassan al-Ghanim, 15, are among the Syrian refugees who live outside of the official refugee camps in Turkey. The Khilal family is from the Al Muyassar neighborhood in Aleppo, but now lives in Kilis in a shop located on the ground floor of a building.
Khilal and al-Ghanim sell smuggled cigarettes from Syria. Every day, the youth leave early in the morning and come back at around 6:30pm local time.

Thirteen-year-old Omar Khatib, from Hama, is meant to be in the eighth grade. After fleeing many areas of Syria, his family finally ended up in the Turkish capital, Ankara.

They settled in an urban transformation area, dotted with abandoned and partly-demolished houses. The family's monthly rent is $125.

One of eight siblings, Omar and one of his older brothers are responsible for the livelihood of the family. His brother occasionally works at construction sites, while Omar has been earning money for the past six months by collecting and selling scrap metal, papers and plastics out of the garbage.

According to the United Nations, "some 70 percent of Syrian children outside camps are not accessing any form of education" in Turkey. No longer in school, Omar earns roughly $150-$200 per month working. "I do not have friends here. They are far ahead of me [at school] and I am left behind, left behind in life," he said.

Syrian refugees joining the informal labor market in Turkey has pushed wages down, which has increased resentment among the local population, wrote Kemal Kirisci in a brief for the Brookings Institute. "Current Turkish labor laws make it very difficult for Syrian refugees to obtain work permits and seek employment in the formal economy," he found.

Amir Akdag is chairman of the city council's Committee for Monitoring and Preventing Child Labor in the southeast province of Adana. He said that Syrian refugee children are working in a variety of non-regulated jobs, including handling dangerous equipment and strenuous manual labor.
"They use all types of potentially dangerous tools from welding machines to pick-axes. Yet they cannot even read safety warnings, let alone communicate with others," he told Al Jazeera.

Ertan Karabiyik, the head of Development Workshop Cooperative, a group that runs projects to enhance the working conditions for seasonal agricultural workers and child labor in this sector, added: "There are tens of thousands of children who live as nomads travelling from one city to another … Syrian refugees have also joined them. They do the hardest work in the fields."

Dozens of children live at the workers camp in Adana. With dirty faces and unwashed hair, they live next to an open sewer. The camp's only source of clean water is a nearby well. The youngest of the child workers is seven-years-old.
Ibrahim Cerrah, 13, works in the fields. His family had its own land in Hama, Syria, but he never had to work, he said. "Working with pick-axes and shovels is hard. My shoulders and feet always ache," he said.

In his family, all children aged ten and above have to work. Ibrahim earns $15 a day for 11 hours of pick-axing. He does not have many friends at the camp, and says people at the camp do not like Syrians.

"Working with pick-axes and shovels is hard. My shoulders and feet always ache," he said.

In a poorly-lit basement in Istanbul, Muhammad Ahmad, 14, bustles around busily as he spends at least 11 hours in a mold-smelling, dusty illegal textile manufactory.

His job is to pick up, arrange and carry the clothes and earns around $250 a month. His family used to live in Aleppo but moved to the Kurdish-controlled district of Afrin when the conflict escalated.

Ahmad came to Istanbul with his two uncles. Along with other older men, he shares a low-ceilinged bachelor room, with no bathroom or kitchen. The family has debt and Ahmad must work to pay it off. "Life brought us to Istanbul," he said.

Atman, Aysha and Suad earn as little as $10 a day by selling biscuits