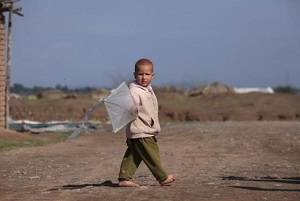 Of some 5.3 million people displaced by fighting in northwestern Pakistan in recent years, a million or so remain to be resettled under a program the authorities see as key to keeping a lid on extremist violence.

People are generally anxious to get back, having lived in refugee camps or cramped conditions in towns and cities since being forced to leave the so-called Federally Administered Tribal Areas (FATA).

More than four million have already done so, and the government wants those left resettled by the end of 2016.

With support from international, Pakistan plans to refurbish bombed-out roads, irrigation networks, markets, schools and hospitals in one of the poorest areas of the country.

"We want to launch a mini-Marshall Plan so as to develop this area," Baloch said, referring to the financial aid package to Europe after World War Two.

Aadil Mansoor, assistant country director at the United Nations Development Programme (UNDP), estimated around $800 million would be needed to resettle and rebuild the region over the next two years.

Though long-term infrastructure projects have better financial backing, short-term aid has been harder to come by, as donor nations focus on humanitarian emergencies in Syria and Yemen, he said.

Lola Castro, country director for the United Nations World Food Programme (WFP), said her agency was about $50 million short in donor support to provide food and early recovery aid to displaced and returning families this year.

"This is a very critical year, and unfortunately, as I see it, it's the year where Pakistan is being left by itself."

In addition, a government-led program is tens of millions of dollars short of what it needs to help restore basic services and kick start the economy in the badly disrupted area, according to the UNDP, which helps administer the plan.

If insufficient funds mean people struggle to support their families after they return, they might be more susceptible to militant recruitment or leave again, aid officials said.

"People who don't have basic social services – health, water, sanitation, food, education – what do they do?" said WFP's Castro. "They move. They simply move."

Syed Halim Dawar, head of a 14-member family forced to leave North Waziristan in 2014, said he heard some who had gone home did not have drinking water or electricity, and that the bazaar where he ran a successful business had been destroyed.

But the 55-year-old would rather return than continue living in a small house in Peshawar, where he has been unable to open a new shop.

Most people due to go back this year are from North and South Waziristan, two agencies where fighting was particularly intense and where militant groups have warned people not to come back.

An internally displaced boy, whose family fled military operations in the Khyber Agency, holds a kite while playing at the UNHCR Jalozai camp in Peshawar, Pakistan, March 15, 2016.