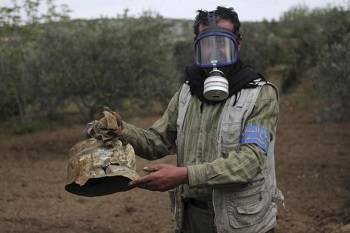 With Syria's war entering its sixth year, hundreds of civilians are being killed weekly and at least 1.9 million continue to live under siege, lacking access to life-saving humanitarian aid. Few international aid agencies have been allowed to deliver relief supplies or to work within the country; those that have, are doing so at the high risk of being targeted.

Doctors Without Borders (MSF), is one of several humanitarian aid NGOs whose hospitals and medical personnel have repeatedly been attacked in Syria. The organization operates a support programme to approximately 70 healthcare facilities run by Syrian doctors, where it provides medical supplies, salaries, advice among other services.

Al Jazeera speaks to Mego Terzian, the President of MSF in France, where the organization was founded, on the group's efforts in Syria.

Al Jazeera: What are the main challenges MSF is facing today?

Mego Terzian: We have had a great deal of human loss in the past three years; from the Ebola epidemic where we lost plenty of staff, up to Kunduz in Afghanistan where the hospital was bombed by the US army and where we lost 14 staff members and more than 20 patients. In Aleppo, and in Syria in general, too, where several of our colleagues have been killed in the past three or four years.

The only challenge is for humanitarians to access the population and vice versa.

In Yemen, the situation is also very difficult; we had several injured humanitarian workers and we've simply been very lucky that there haven't been any deaths. Now it is a question within our organization - whether the number of humanitarians being killed today is higher than it was in the 80s and 90s. I honestly don't think so.

I think since the creation of our organization we started to face problems and a lot of human loss. Although we may be feeling that today it is worse, the difference is that before we didn't have the tools to record statistics showing the exact number of workers killed and injured.

We don't have the exact details of the past but we unfortunately had many losses in South Sudan during the war with the north in the 90s, in Afghanistan in the 80s, in Rwanda in 1994 and in Congo as well. Unfortunately it is not something new.

Al Jazeera: How does that compare with the situation in Syria?

Terzian: The challenge in Syria is [securing] the safe access of aid to the population, which has not been feasible for months now. For example, the bombing of a humanitarian convoy in Aleppo a few weeks ago was horrible and unacceptable. Many similar stories happened during this conflict.

Today I suspect the regime will not accept any convoys inside eastern Aleppo to evacuate severely wounded kids or patients to safer areas in Idlib or other places.

The only challenge is for humanitarians to access the population and vice versa; the population are facing big difficulties reaching health facilities and to be treated safely. It's really chaotic.

Al Jazeera: Do you think the attacks on the hospitals in Syria are deliberate?

At the same time it is true that in this conflict if you are conducting medical activities in the zones controlled by the opposition groups, you are equal to criminals, even to ‘terrorist’ groups [by the regime]. There is the general policy of terror, including the plan to target the humanitarian mission, which is suspected of supporting the opposition groups or the people that are pro-opposition directly or indirectly.

So, you are an enemy to them [the Syrian regime] as well.

We negotiate with everyone including the Syrian regime to see whether we can operate even independently.

This is the problem with the conflict in Syria. The Syrian context has been the most difficult context for MSF in the last 15 years. I was part of the operations in the Ivory Coast intervention in the last crisis. I was also very involved in the Libya crisis.

I was involved in Somalia and the Central African Republic too. It is true that Syria is the most violent context that my organization has intervened in because of the policy of terror that the Syrian regime has adopted since the beginning of the armed conflict.

Al Jazeera: MSF has been trying to operate out of regime-controlled areas in Syria. What has happened with these efforts?

Terzian: We are still negotiating. We started negotiating in April 2011 with the Syrian regime directly and indirectly in order to see whether we could intervene in the county officially. They rejected the dialogue almost systematically every time.

So we decided in June 2012 to cross the borders illegally from the neighboring countries to work in opposition-controlled areas. Maybe we were illegal for the Syrian regime, but at least we were legitimate. The aid system until now and from the beginning of the current conflict in Syria is not well balanced.

Most of the aid from the United Nations and International Red Cross is going to the regime-controlled areas via the local Syrian Arab Red Crescent. The aid is being distributed to the places under the Syrian regime control, and very little aid is going to the zones controlled by the opposition. This has been happening since the beginning - it is not new.

Al Jazeera: Why do you think the Syrian regime is refusing to allow MSF to operate in regime-controlled areas?

Terzian: They didn't officially refuse - we are waiting for the answer. But they didn't give a positive answer either. Honestly, I don't know the exact reasons. In general, western NGOS are perceived to be not neutral, especially by the Syrian regime and that is probably one of the reasons. The Syrian regime suspects international NGOs to be potential troublemakers for them.

Our public position since the beginning of this conflict caused unhappiness among some officials in Damascus and not only there, but also to officials such as the UN Ambassador for

Syria, Bashar al-Jaafari. Jaafari made very strong statements against our organization following the bombing of one the hospitals and the death of some staff, where MSF said that it was either Russia or Syrian regime that carried out the attack.

He accused us of being the espionage branch of the French government. Paradoxically, while the regime in Damascus refused to facilitate our presence, opposition groups, including radical groups, accepted and tolerated our presence for at least two years in most of the part of northern Syria.

Unfortunately, in 2014, when five of our colleagues were kidnapped in Darkoush district in Latakiya province, we decided to withdraw the international personnel since ISIL, also known as ISIS, didn't respect their guarantees. But at least we survived for two years with all the groups, while at the same time the Syrian regime was rejecting our organization without giving clear explanations.

Terzian: We don't cooperate but we do negotiate. We negotiate with everyone including the Syrian regime to see whether we can operate even independently. That's what we've been doing in Syria since the beginning and that's what we will do in the future as well.

Al Jazeera: How does MSF plan to combat such challenges in Syria in the future?

In Afghanistan, after several security incidents in the 80s, we said "OK we quit. We will stop everything". One year later, Afghans came to our headquarters in France to meet us and to beg MSF to come back. They told us they would open their doors and they did.

I hope it will be the case in the future, in difficult conflicts such as Syria.

A Civil Defence member carries a damaged canister in Ibleen village from what activists said was a chlorine gas attack, on Kansafra, Ibleen and Josef villages, Idlib countryside May 3, 2015. REUTERS