In west Mosul, 'nowhere is safe for civilians' 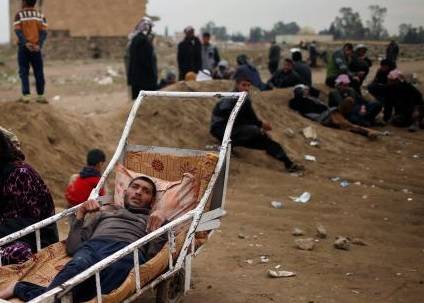 The Iraqi army on Sunday resumed operations in Mosul after a one-day pause, amid growing concerns over an escalating civilian death toll as fierce fighting reaches the city's most densely populated areas.

Security forces on Saturday did not permit journalists to get where the strikes were said to have taken place, but the coalition admitted that it had struck the area on March 17, and said it was investigating the reports of civilian deaths.

What exactly happened on March 17 remains unclear and details are difficult to confirm as Iraqi forces battle with ISIL to recapture the heavily populated parts of the western half of Mosul.

Witnesses and local officials say more than 200 bodies have been pulled from a collapsed building after a coalition air raid.

Al Jazeera's Hoda Abdel-Hamid, reporting from a hospital in Erbil, northern Iraq, spoke to people who confirmed they had lost family members on the air raids of March 17.

"We've been speaking to some of the patients and certainly the words air strikes come up a lot in the conversation," she said, referencing a man who said 22 of his relatives had been killed in an air raid, while he had to spend several days under the rubble before being rescued.

The US-backed offensive to drive ISIL out of Mosul, now in its sixth month, has recaptured most of the city. The entire eastern side and about half of the west is under Iraqi control.

But advances have stuttered in the past two weeks as fighting enters the narrow alleys of the Old City, home to the al-Nuri Mosque where ISIL group's leader Abu Bakr al-Baghdadi declared a caliphate spanning large areas of Iraq and Syria in 2014.

However, Iraqi forces have also frequently fired mortar rounds and unguided rockets during the battle for west

Mosul - weapons that pose a much greater risk to residents of areas where fighting is taking place.

Hundreds of thousands of civilians are still inside the Old City and exposed to the intense fighting.

"Patients here say there is nowhere safe in western Mosul for civilians," Al Jazeera's Abdel-Hamid, reporting from the hospital in Erbil, said.

"They say the fight in western Mosul is not the same as the fight that happened in the east part of the city. They say it's much more brutal, with many more air strikes and much more shelling."

According to Iraqi authorities, more than 200,000 people have fled west Mosul since the operation to retake the area was launched on February 19.

But the United Nations has said that around 600,000 are still present inside the city.

Caroline Gluck, a senior public information officer in Iraq with the UN's refugee agency, said the situation is deteriorating daily.

"The fighting is coming closer to people's home. It's a very densely-packed area, particularly in the Old City, so families have been terrified by the mortars, the shelling and the air strikes," she told Al Jazeera from Baghdad.

Gluck said a major factor in many residents' "very difficult decision" to flee is growing hunger.

"Families have told us they rely on one meal a day and that meal is really just water and flour. People are getting desperate; there is no fuel, no heating, and they are burning furniture and old rugs to try and stay warm."