Despite seven years of death and destruction, Assad hangs on 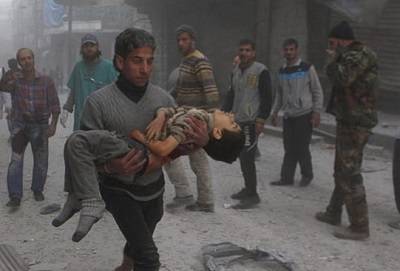 More than 500,000 people have died and millions more have fled their homes since an uprising against Assad began.

The leaders of the US, France, and UK have all but made clear that the air strikes launched on Saturday against Syrian regime positions were limited to destroying the country's chemical weapons capacity.

That means for the foreseeable future at least Bashar al-Assad seems set to continue his hold on power.

After seven years of war, the Syrian regime leader presides over a country that is a shadow of its former self.

Here we look at just how much death and destruction the country has experienced as a result of Assad's determination to hold on to the reins of power.

International organizations have had a hard time keeping up with just how many people Syria's war has left dead.

The number has increased significantly but nobody knows exactly by how much.

According to the Syrian Observatory for Human Rights, a UK-based monitor, the death toll could be as high as 511,000.

Syria's population before the start of the war stood at around 22 million people.

In the seven years since more than five million people have fled the country and another six million have become internally displaced, according to the UN.

The war has contributed to the largest refugee crisis since the end of the second world war and its effects are widely seen as driving the rise of the far right in Europe and the US.

The war has devastated Syria's economy and destroyed vast amounts of its infrastructure, including in major commercial centers, such as Aleppo and Raqqa.

At the end of 2013, the UN estimated that the war had cost Syria $143bn and that was before the rise of ISIL, and US, Russian, and other foreign intervention.

Amnesty International estimates that at least 13,000 people were executed by the Syrian regime in the first five years of the civil war in one prison alone.

Tens of thousands remain missing in Syria with no hint as to their fate.