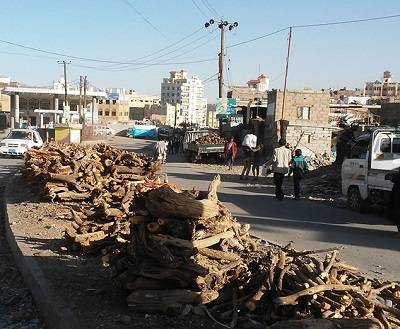 When Yahia al-Amari's three gas cylinders ran dry, he scoured the entire Yemeni capital to find a place where he could refill them.

The 50-year-old walked to nearly every petrol station in Sanaa last month, hoping to find enough fuel to cook his family of seven their first hot meal of the week.

But he was turned away everywhere he went, either by the long queues or the announcements that tanker trucks had failed to arrive.

Since November, millions of Yemenis have been affected by a chronic shortage of fuel after Saudi Arabia tightened its blockade on Houthi-controlled ports and airports.

Attempting to force the Houthis, a group of Shia rebels who control large parts of the north, into relinquishing their grip on power, a major gas firm in Marib, a gas-rich region controlled by the Saudi-backed Yemeni government, slashed deliveries to rebel-held areas.

The blockade, which has only been partially lifted, had a devastating impact on the civilian population, with only a sliver of goods entering the capital of 4 million people.

The shortage of fuel forced factories to lay off their staff, taxi prices to increase astronomically and hospitals, which rely on diesel to power their generators, to start closing wards.

Fuel imports in March were less than one-third, 30 percent, of the national requirement, according to the UN's Office for the Coordination of Humanitarian Affairs (OCHA).

Power shortages have caused a burgeoning rise in demand for diesel and gasoline on the black market, and young men and boys have begun lining major thoroughfares, selling plastic water bottles filled with bright red or deep yellow fuel - at up to five times the normal price.

But, in a country where more than half the population lives on less than $2 a day, he quickly realized that cooking gas, like diesel, was a luxury and an alternative was needed.

"We resorted to buying firewood because buying cooking gas became too expensive," he told Al Jazeera.

"We now head to the market and buy sticks [firewood]. That's how we've learned to cook."

Al-Amri said cooking with firewood had become the norm for several families he knew, with burning embers a frequent sight on the city's rooftops at night.

"My wife prepares food on a make-shift stove on the roof," he said.

"She places two bricks slightly apart with a space between them. Then, the firewood is cut into small pieces and placed between the bricks and then a cooking pan is placed on top."

It's a primitive way of preparing food but it works, he added.

Standing at a busy interchange in front of a large pile of wood, Abdu Alghaili, a firewood dealer, said the gas shortage had led to a spike in his business, but left the poorest most vulnerable.

"Customers are looking for anything as replacement for cooking gas, and firewood is their best choice.

"I have to fetch the wood from outside Sanaa. I go to Hajjah [120km north of Sanaa] or Tehama [200km west] and spend around a week collecting the firewood before hauling it back in the truck. It's not an easy job."

"Many of the internally displaced Yemenis are increasingly being driven to rely on humanitarian assistance, indebting themselves or resorting to other negative coping mechanisms such as begging to try and sustain themselves while in exile.

"Many are also drastically reducing their food intake as their purchasing power has reduced as a result of conflict and exile but food and fuel prices have also increased."