Spain: Hundreds of people rescued from the Mediterranean sea 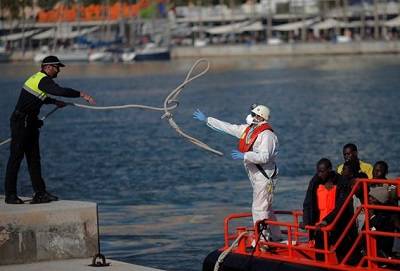 Spanish authorities have rescued more than 500 people attempting to cross the Mediterranean Sea in a bid to reach Europe.

Spain's maritime rescue service said it pulled 243 people from eight small boats on Sunday, a day after picking 293 others from nine vessels.

Three of the boats located on Sunday were in poor condition and sank shortly after those on board were removed from them.

The operations included plane and helicopter searches, while those rescued were from various countries in north and sub-Saharan Africa.

Arrivals to Spain by sea soar

At least 6,872 people have been rescued while trying to enter Spain by sea so far this year, according to the International Organization for Migration (IOM), while 218 others have died attempting to make the crossing from North Africa, known as the Western Mediterranean route.

While the number of refugees and migrants arriving in southern Europe by sea has dropped substantially since the height of the European Union's (EU) refugee crisis in 2016, the number of such arrivals in Spain has jumped during the same period, according to the IOM.

At least 21,468 arrived in Spain by sea between January 1 and December 20 last year, IOM figures show, more than triple the number for the same period in 2016.

Spain is the third busiest point of arrival for all refugees and migrants entering Europe by sea, behind Italy and Greece, accounting for 23 percent of all such arrivals to the EU.

Increasingly, it is seen as an alternative arrival destination for those seeking to avoid travelling through Libya, where widespread abuse and slavery has been documented, and onwards across the Mediterranean to southern Italy.

In separate comments on Sunday, Austrian Chancellor Sebastian Kurz called for EU border agency Frontex to be given a new mandate allowing it to act in "third countries with the agreement of local government".

Kurz told Germany's Welt am Sonntag newspaper that more must be done "to end smugglers' dirty business model and prevent smugglers' boats setting off on the dangerous route across the Mediterranean".

Austria is set to take over the presidency of the EU, which rotates among member states every six months, in July.

Kurz is known for his anti-immigration stance and has previously called for stricter border controls in Europe to discourage refugees from fleeing to Europe.