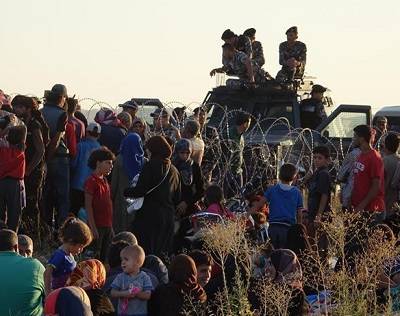 The number of people who have fled Syria’s southwestern city of Daraa to the border areas near Jordan and Israel due to fierce attacks by Syrian regime forces now stands at some 198,000, the Syrian Network for Human Rights (SNHR) said Sunday.

At least 214 civilians have been killed in regime attacks, backed by Russian air coverage, in Daraa between June 15 and June 30, the SNHR said in a report.

The fatalities included 65 children and 43 women, the NGO said.

The regime onslaught has forced thousands of civilians to flee to the border areas near Jordan and Israel.

On Thursday, Amman expressed its readiness to support the UN’s role in assisting displaced Syrians -- but without going so far as to open the border.

In the last several days, Daraa has been the target of intense air and ground attacks by the Bashar al-Assad regime and its allies, who have advanced deep into Daraa’s eastern countryside, capturing the towns of Busra al-Harir and Nahtah.

Syria has only just begun to emerge from a devastating conflict that began in 2011 when the Assad regime cracked down on demonstrators with unexpected ferocity.