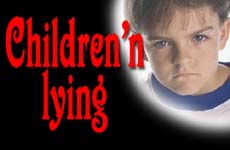 •   The role of the family in teaching the child how to lie.

•   The role of the community in teaching the child how to lie.

1)  Lying due to imagination.

2)  Lying due to misconception.

6)  Lying as a protective measure.

7)  Lying in imitation of others.

For a mature person, lying is one of the most severe and dangerous social phenomena, because it can destroy communities and remove trust from amongst its members, causing people to doubt and be suspicious of others instead of feeling tranquil and secure with their words and behaviour. Allah Says (what means): {They only invent falsehood who does not believe in the verses of Allah, and it is those who are the liars.} [Quran 16:105] The evil consequences of lying were well known to sound-minded people even before Islam dispraised it, as in the pre-Islamic era people would hate to be described as liars.

Many parents are disturbed due to their children’s lying, but they usually make the mistake of categorizing all the lies in a single type and attempt to deal with the problem according to that.

There is a huge difference between the lies of adults and the trickery that children use in order to protect themselves from being punished, or due to them being under the influence of their imagination; thus, the guardian or cultivator must search for the motive or the circumstances which made the child use such a method or have such a quality. The child will remain to be on the safe side, as well as his family, as long as the family studies his behaviour and expresses love and compassion towards him while instructing and guiding him to the correct path.

The role of the family in teaching the child how to lie:

A father may promise his children gifts, or that he will take them out on a picnic on the weekend but fail to fulfil his promise for a certain reason; if this repeats, his children will think that it is justifiable for a person to say something while he does not truly mean it ... meaning he can lie; and thus they learn this in an indirect way from their father who is supposed to be their example.

A mother may borrow something from one of her neighbors and give a false excuse to that neighbour for not returning it in front of her daughter who knows very well that it is untrue, and thus the mother teaches her daughter to lie, even if the mother does not realize that she is doing so.

The parent who commands his child to answer the phone and inform the caller that he is not present, is, in fact, teaching the child how to lie; and thus the child grows up having this bad quality.

The danger in the parent’s behaviour is that children do not understand that they are lying for a certain reason or under certain circumstances in which they may be Islamically excused, and so the children will, therefore, generalize lying under all circumstances in their lives. Additionally, extreme harshness in the house and lack of love, forgiveness and understanding on the parent’s part encourages children to lie.

The role of the community in teaching the child how to lie:

There is a big difference between the Muslim community which is bonded with love, harmony and Islamic brotherhood - the community which if any part of it suffers, the rest of it rushes in care and compassion to its side - and the modern communities which our children might be exposed to through video tapes or television films. These communities are based on fake relationships, for example an employee would praise his employer for qualities he does not possess, in order to please him and gain privileges that he does not deserve, such as raises, promotions and so on.

The types of lying:

There are different types of lying a child might do, and the most common are those which are categorized below, based on the motive behind their behaviour:

1)     Lying due to imagination: This type is usually done by children with wild imaginations who imagine things and then think in their minds that they are real, such as a child who remembers his parents bringing home a goat with horns based on which he begins crying and requesting a dog with horns like the one that was brought home before. This is not lying in the true sense of the word, and the role of the parents is to direct him so that he can differentiate between imaginary matters and facts in a way that befits his mental level. Moreover, it is very wrong to accuse such children of lying or punish them.

2)     Lying due to misconception: Some children muddle up what they imagine with real life and cannot differentiate between the two due to weakness in their mental abilities; they might hear a tale and narrate it as a real life story with minor changes to some of the characters in it. Other children might see a dream and narrate it as if it is something which has actually happened.

3)     Lying by making false claims: Children may resort to this type of lying due to them feeling deprived of things that others have; a child may start telling other children that he possesses certain expensive and fine toys, or talk about his father having great wealth and a fancy house. Another way of practicing this type is the child pretending to be sick to avoid going to school. There are two things which lead the child to this type of lying:

Firstly: Boasting and trying to remain on the same level as his friends who talk about their rich parents, fine houses, or expensive toys.

Secondly: Aiming to gain the parents' sympathy; this type is done when a child feels that his brothers or sisters are being favoured over him, and thus the parents must understand the motives behind it, cure them, and try to fulfil the needs which the child feels he is being deprived of.

4)     Lying to achieve a goal: A child resorts to this type when he feels that his parents are preventing him from achieving his goals; such as if he desires a toy which he knows that his father will refuse, and thus he resorts to lying by claiming for example that his school is asking for a certain amount of money, which he will take to buy what he wants.

5)     Lying to take revenge: This usually results in an environment of injustice between children at home or at school. A child may ruin something then accuse his brother or classmate, and they would usually accuse those who are being giving more attention than themselves.

6)     Lying as a protective measure: When a child fears punishment, either from his parents or his teachers, he may resort to this type of lying. This type is more common amongst boys than girls, and more so in environments which are harsh and are known for punishment.

7)     Lying in imitation of others: A child might witness one or both of his parents lying and thus he may lie, even if there is no need for it at times.

8)     Lying as a chronic habit: Children who are afflicted with this type are usually very good at lying as it becomes deeply rooted in their character to the point that it is difficult to distinguish when they are lying and when they are telling the truth.