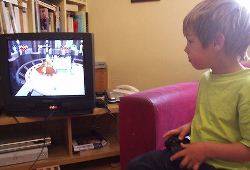 1- The meaning of the child’s culture:

Culture refers to a combination of beliefs, morals, traditions, laws, knowledge and behavioral patterns that one acquires within society.

Children have their special and distinguished vocabularies, as well as special values and methods that they use in playing, expressing themselves and satisfying their needs. They also have special reactions, stances, trends, emotions and lifestyle. We call all this the “child’s culture”.

2- Mass media as a source of the child’s culture and experiences:

Today all cultural borders between nations have disappeared and we live now amidst a massive technological and scientific revolution within which the mass media plays a very important role in forming the child’s psychology religiously, culturally and socially. To have a child with a distinct and integrated personality, there should be a specific vision to preserve his cultural and religious identity.

In this respect, the mass media including TV, the Internet, electronic games, and so on, play a key role in building the Muslim child culturally. It should be determined what is introduced to him from the other cultures.

Studies all over the world show that the child between the ages of six to sixteen spends about 12-24 hours a week in front of screens.

Influence of the mass media on the child:

The mass media provides a small child with different cultures while he is still unable to differentiate between what is good and what is bad. This transforms the mass media into a double-edged weapon with its positive and negative influences. This should draw our attention to the fact that the mass media and media institutions that are directed to the child and that are concerned with childhood should be the center of attention of the whole society.

We do not deny the importance of print, audio, and visual mass media in forming learning experiences, and defining, modifying and dispersing attitudes. Similarly, we do not deny the role of the mass media in developing the child’s personality, polishing his skills, and developing his mental, emotional and social abilities. The media for the child is a method for guidance and entertainment, as well as a means for transferring and establishing traditions. However, where are the mass media that cover all that interests the child?

The media materials that our children watch on TV or other mass media can be divided into three categories:

Disney films, which are made in the West and that aim at serving the American culture in particular. The theme of these films is derived from their Western values, which contradict our own Islamic traditions and values. So-called "love" dominates every single word of these stories, which aim to mold the child’s mentality in a certain way. If we contemplate the appearance, we will find that they fulfill the criteria of material beauty.

Therefore, a child who watches such films will grow up knowing nothing but the Western concept of beauty, not to mention that these films aim at making profits in the first place. This attitude transforms the child into a consumer, because once he sees the story, he hurries to buy pens and notebooks that carry the pictures of its heroes.

The Far East dubbed cartoon films that are characterized by wild imagination and featuring violent electronic aliens that walk in the streets to destroy and kill. These films are introduced to the Arab child through the local mass media.

This category is represented in the local materials that are produced by private and public media establishments. They are mostly in audio or video format. However, they are artistically and technically weak and cannot compete with the other alternatives. Nevertheless, some successful and beneficial works appear from time to time. Some institutions also produce stories derived from the Quran and Islamic history in addition to Nasheeds (Islamic poetry). However, such materials are too few to meet the Muslim child’s needs.

3- Mass media and their influence on the identity and culture of the Muslim child:

The majority of studies and researches in this field show that belonging to a strong and civilized environment with a distinct identity since early childhood is one of the most influential factors in the child’s upbringing and culture. Hence, the mass media shoulder a great responsibility regarding focusing on the Islamic values that should be implanted in the child to form a set of beliefs that express his Islamic identity.