The Miraculous Spread of Islam 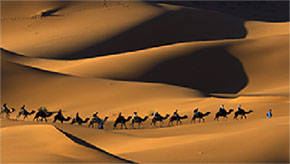 Look at the beginnings of this religion and how it unified the Arabian Peninsula, while Arab loyalties were divided with unrestrained enmity and maliciousness everywhere. Look at how, as Muslims, they united, cast aside their differences, and became a firm brotherhood of faith!

Take a quick look at the early extraordinary conquests of Islam. Then at how the Muslims defended and maintained their position, even while their enemies fiercely opposed them!
After establishing their state, they spread to the farthest parts of the world and continued their conquest of hearts and armies there. Many emperors and nations fell into their hands, including the then powerful nations of Persia and Rome. Muslims easily overcame them and their surrounding lands even though their enemies were strong in warfare and well-supplied with arms. But the Muslims were victorious because of the virtues and merits of their religion, the strength of their faith, and Allah’s aid in assisting them until the boundaries of Islam spread from the East of the earth to its West.
This resulted as one of the great signs of Allah, proofs of His religion, and a miracle of His Prophet

. Thus, people entered into Allah’s religion in multitudes with peace of mind and tranquillity, not by force or compulsion.
Whoever examines this fact closely will see that this religion is the truth, which will always reject anything false, even when it becomes tremendously appealing and reaches its zenith on the world stage. This is an undeniable fact which is easily seen by simple reasoning.
Among the most persistent falsehoods about Islam in the West today is the lie about forcible conversions to Islam. Many Westerners continue to believe that Islam is so widespread in the world today simply because of a 'holy campaign of terror' carried out by the early Muslims to convert non-Muslims to Islam. According to these fabrications, non-Muslims were given the choice of Islam or death.
How can we confront such misconceptions? First, there is no need to be apologetic. We Muslims should search for the truth and present it as it is.
This is how we have been instructed by Allah Almighty, in words (which means): "…Say: "The truth is from your Lord, so whoever wills – let him believe; and whoever wills – let him disbelieve.'" [Quran 18:29]
Islam is the religion of truth. The Quran is the book of truth; Allah Says (what means): "And with the truth We have sent it [i.e., the Quran]..." [Quran 17:105] And also: "So rely upon Allah; indeed, you are upon the clear truth." [Quran 27:79]
Therefore, we should ask ourselves first, before we are asked by anyone else, what is the truth? Did Muslims really force others to convert to Islam? Is there any evidence for consistent forcible conversion throughout Islamic history? As a matter of fact, there is no such evidence anywhere in the history of Islam.
Many distinguished Western historians have attested to this fact in their books, foremost amongst them are Sir Thomas W. Arnold in 'The Preaching of Islam', Marshall G. Hodgson in 'The Venture of Islam', Albert Hourani in 'A History of the Arab People', Ira Lapidus in 'A History of Islamic Societies', L.S. Starorianos in 'A Global Hisotry, the Human Heritage', and many others. In fact, there is a plethora of evidence to the contrary.
Some contemporary writers whose works are influenced by the enemies of Islam claim that these unprecedented victories were driven purely by materialism, which is completely baseless. They claim that the successful spread of Islam was possible because of the deterioration and downfall of the lands of the Caesar of Rome, and the material prosperity in Arabia. This point alone is enough to invalidate their claim.
Was there any power existing in the Arabian Peninsula before Islam capable of confronting even the weakest government? In their zeal, Muslims conquered the strongest governments and most powerful nations of the world. The enemies resisted with massive arms and vast armies, and every means in their power, but tyrannical rule was replaced by the Laws of the Quran and the Religion of Justice.
How can they misrepresent the conquests of Islam and its growth with the claim that material gain was the prime factor behind it? By such fabricated stories, they meant to tarnish Islam, promoting the accusations of the enemies of Islam, without understanding the truth.
The continuous existence of this religion, even under dangerous circumstances, is one of its distinguishing signs; despite the fact that its enemies collaborate for its total extermination; Allah Says (what means): "They [i.e., the disbelievers] want to extinguish the light of Allah with their mouths, but Allah will perfect His light, although the disbelievers dislike it." [Quran 61:8]
This is the true religion of Allah. If the necessary strength was assembled to repel the oppressors and end their systems of injustice, then no religion other than Islam would remain on the earth, and all of its inhabitants would accept it without compulsion or coercion, because it is the religion of truth, the natural religion, the religion of unity and social welfare. But its people are negligent, weak and disunited, and they are impeded by the influence of their enemies, preventing them from advancing. There is no might or ability except from Allah.