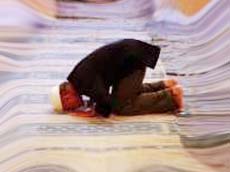 Worship covers all aspects of life: Worshipping Allah does indeed necessitate using all one’s limbs in the obedience of Allah and carrying out His orders. One can worship Allah by preventing his eyes from gazing at unlawful things and using them to look at what Allah loves, like a copy of the Quran, books of knowledge etc. He can also worship Him by preventing his ears, hands and feet from all that Allah forbids and using them in things that He enjoins and loves. Allah says (what means): “Say (O Mohammad); Verily my prayer, my sacrifice, my living and my dying are for Allah, the Lord of the ‘Aalameen (mankind, jinns and all that exists). He has no partner. And of this I have been commanded, and I am the first of the Muslims.” [Quran 6:162-163].

As for the Prophet

submitted his whole life to Allah in all his conditions. Allah says (what means): “And who can be better in religion than one who submits his face (himself) to Allah and he is a Muhsin (a doer of good).” [Quran 4:125].

used to fear Allah and always seek for His forgiveness. He

said: “By Allah! I indeed invoke Allah for forgiveness and repent to Him more than seventy times a day.” (Al-Bukhari) He

was asked, “O Messenger of Allah! You do this when your former and latter sins have been forgiven?” He

would reply: “Should I not then be a grateful slave?” (Al-Bukhari & Muslim)

However, the most wonderful aspect of the Prophet’s (

) worship is that astonishing combination of the highest level of worship and performance of his role as the head of his nation. He

said: “By Allah! I am the most fearful of Allah among you, but I fast, and eat; I pray and I sleep and I marry women. Whoever differs from my way is not of me.” (Al-Bukhari)

said: “The heart cannot be good, prosper, have felicity and easiness, enjoy and have tranquillity except through the worship of its Lord alone. Even if it attains all pleasures of this world it will not get peace and tranquillity, for it has a natural spontaneous need to its Lord because He is its Lord…”

Nullifiers of worship, and reasons for rejecting it: Not fulfilling the two conditions of accepting a deed (namely, sincerely and coinciding with the way of the Prophet

), are the foremost reasons one's deed may be rejected as we have mentioned before.  One of the Salaf (the righteous predecessors)

said: “Indeed, Allah has bestowed His favour upon His servants and commanded them to be grateful as much as they can, for gratitude, however little it may be, is a price for the favour, however big it may be. If one is not grateful, he has exposed the favour to extinction…”

The effort exerted by the Salaf in worship: Our Salaf

… people who’s hearts were full of love for Allah in all their conditions … they then became delighted … their souls became tranquil … peace ruled over their limbs … then, thoughts of love replaced those of disobedience … the will to move nearer to Him replaced that of displeasing Him … movements of the tongue became that of obedience or contrary to disobedience.

was asked about the activities of Ibn ‘Umar, may Allah be pleased with him, at home, he replied: “He used to perform ablution for every prayer and recite Quran in between them [i.e. in between ablution and prayer.]” [End of quote].

said – while describing efforts of Salaf in worship, “I have met people and I have accompanied groups. They (i.e. the people I have met and accompanied) did not use to rejoice at whatever came their way of the beauties of this world; nor did they use to get sad over whatever departed from them of this world. Rather, the world was less significant to them than the soil over which they walked. They would act by the book of their Lord and the Sunnah of the Prophet. During the night they stood up in prayer, prostrated their faces and wept out of fear of Allah.” [End of quote].

Whenever Ibn ‘Umar, may Allah be pleased with him, missed a congregational prayer, he would atone for that by a day of fasting, a night vigil (in prayer) and manumission of a slave.

The wife of ‘Umar ibn Abdul-‘Azeez

said: “I have never seen anyone who prayed fasted and feared Allah more than him (meaning her husband). He would pray ‘Ishaa’ prayer and then sit mentioning Allah until he was overcome by slumber. He would remember some of the issues of the Last Day while he was on his bed and tremble like a sparrow and then sit down weeping. I would then cover him with a sheet.” [End of quote].

never missed the opening Takbeer (in a congregational prayer) for almost seventy years and I visited him for more than six years, and I have never seen him performing a missed Raka’ah.” [End of quote].

also said: “I have never prayed an obligatory prayer alone except twice and even then I felt as if I had not prayed it at all.” [End of quote]. It should be noted that he was almost ninety years old when he died.

Through worship, a believer’s soul becomes tranquil, that tranquillity energises it and tells it, “O soul! Be happy, for the home is near and reunion is imminent”. Therefore, do not terminate your journey and thus be denied reaching the home of the loved ones.

This is how our Salaf

were… and this how we should be.

The concept of worship -I