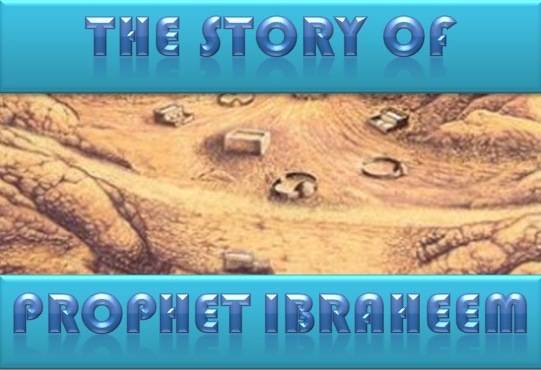 was born in . His father, whose name was Aazar, would carve idols from wood and sell them to the idol worshippers. Prophet Ibraheem

led his life in continuous struggle to comprehensively establish Islam. He is mentioned with praiseworthy titles in the Quran which help us to understand his distinguished character.

was endowed with knowledge of Allah from a very young age. He rejected the practice of idol worship and urged his father to worship Allah, the one and only God. He argued with his father to abandon his idolatry and worship Allah alone, but the latter became enraged and displayed haughtiness and arrogance. When Ibraheem

further argued with his father that the idols did not have the ability to harm or benefit, his father told his son to leave his house or be stoned to death.  Ibraheem

addressed the issue of worshipping kings and rulers such as Namrooth, king of in Chaldea () who alleged being a god. This tyrannous king claimed the ability of giving life and causing death to human beings. Prophet Ibraheem

refuted this allegation by a decisive sentence when he asked the king to cause the sun to rise from the west. The king Namrooth realised his disability to accomplish such a task, and therefore his allegation of being a god was refuted.

He, may Allah exalt his mention, continued his struggle against idolatry and followed every possible way to prove the Tawheed (Oneness of Allah) by offering evidence and logical arguments. He asked his people (what means): "…'What do you worship?' They said: 'We worship idols [as did our fathers] and remain to them devoted.' He [Ibraheem] said: 'Do they hear you when you supplicate? Or do they benefit you, or do they harm?'" [Quran: 26:70-73]

He, may Allah exalt his mention, was shown by Allah the Kingdom of the heavens and the earth, so that he might be convinced of the faith in his Creator; The Quran narrates (what means): "So when the night covered him [with darkness], he [Ibraheem] saw a star. He said: 'This is my lord.' But when it set, he said: 'Unless my Lord guides me, I will surely be among the people gone astray.' And when he saw the sun rising, he said (what means): "'This is my lord; this is greater.' But when it set, he said, 'O my people! Indeed I am free from what you associate with Allah. Indeed, I have turned my face [i.e., self] toward He who created the heavens and the earth, and I am not of those who associate others [in worship] with Allah.'" [Quran: 6:76-79]

The people jeered at him, remonstrated with him, and even stoned him; they tried to frighten him into believing that their idols would destroy him and his God would not be able to save him.

responded with (what means): "…'do you argue with me concerning Allah while He has guided me? And I fear not what you associate with Him [and will not be harmed] unless my Lord should will something'…" [Quran: 6:80-81]

After he had no hope of their response, he crept in stealth to their idols and smashed them all, except for the largest one. When the people knew that Ibraheem

had been the doer, they prepared a huge fire wherein he was thrown. But he emerged safe from the fire by the Grace of Allah.

left his people for , accompanied by his wife, Sarah, and his nephew, Loot, may Allah exalt their mention. When they passed by the territory of a tyrant king, someone told that tyrant that a stranger had come accompanied by a very charming lady. The king ordered that the lady be brought to him.  When the lady (Sarah) was brought to him, he tried to take hold of her but, by a miracle of Allah, his hand became rigid. He then gave Sarah, may Allah exalt her mention, a maidservant by the name of Hajar, may Allah exalt her mention.

From Hajar, may Allah exalt her mention, Ibraheem

was given a son named Ismaa'eel, despite being eighty-six years of age. Allah the Glorious and Mighty then commanded Ibraheem

to take his wife and beloved son to a barren place (Makkah) and to leave them there, alone, where no food, water, or human life was to be seen. The wife, may Allah exalt her mention, heartily accepted this command, as it was Allah’s will.  It was only occasionally that Ibraheem

did visit his bitterly suffering wife and son. On one such visit, Allah commanded him to offer his son as a sacrifice, which was the most difficult test for his faith.

The son obeyed his father’s accomplishment of Allah’s will. Just as Ibraheem

was about to slaughter Isma'eel

Allah ransomed him for a ram.  Allah revealed to Ibraheem

that this was a trial for him in which he succeeded.

Ibraheem and his son, Isma'eel, may Allah exalt their mention, then built the Sacred House of Allah, the Ka’bah, in Makkah (see Quran: 14:35–41]). Prophet Ibraheem

As a concluding statement, it is worth noting that this story of Ibraheem

teaches us, among many other things, that it is the relationship between a Muslim and his Lord and brother Muslims that should be given precedence over blood relationships.

The story of Prophet Ibraheem –II