The story of Prophet Ibraaheem –II 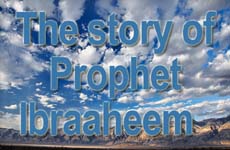 knew that there was to be a great celebration on the far bank of the river which would be attended by all the people. Ibraheem

waited until the city was empty, and then came out cautiously, directing his steps towards the temple. The streets leading to it were empty and the temple itself was deserted, for the priests had also gone to the festival outside the city.

went there carrying a sharp axe. He looked at the stone and wooden statues of the gods and at the food laid in front of them as offerings. He

approached one of the statues and asked: "The food in front of you is getting cold; why don’t you eat?" The statue was silent and rigid. Ibraheem, may Allah exalt his mention, asked the other statues around him (what means): "…'Do you not eat?'" [Quran: 37:91]

then raised his axe and began smashing the false gods worshiped by the people. He

destroyed them all, except one, around whose neck he hung the axe. After this, his irritation subsided and he felt at peace. He, may Allah exalt his mention, then left the temple, having fulfilled his vow to show his people a practical proof of their foolishness in worshiping something other than Allah.

When the people returned, they were shocked to see their gods smashed to pieces, lying scattered all over the temple. They began to guess who had done that to their idols, and Ibraheem’s name came to their minds.

Allah the Almighty Says (what means): "They said: 'Who has done this to our gods? Indeed, he is of the wrongdoers.' They said: 'We heard a young man mention them who is called Ibraaheem.' They said: 'Then bring him before the eyes of the people that they may testify.' They said: 'Have you done this to our gods, O Ibraaheem?’ He said: 'Rather, this – the largest of them – did it, so ask them, if they should [be able to] speak.' So they returned to [blaming] themselves and said [to each other]: 'Indeed, you are the wrongdoers.' Then they reversed themselves, [saying to Ibraaheem]: 'You have already known that these do not speak!' He said: 'Then do you worship instead of Allah that which does not benefit you at all or harm you? Uff [i.e., an exclamation of disgust] to you and to what you worship instead of Allah. Then will you not use reason?'" [Quran: 21:59-67]

Ibraheem is flung into a Huge Fire

Furious, they demanded that Ibraheem

be arrested and tried. Ibraheem

did not resist. This was precisely what he had been aiming for, so that he could show them up in public for their foolish beliefs.

At the trial they asked him if he was responsible for breaking the idols. Smiling, he

told them to ask the biggest idol, which was still whole, saying that he must be the culprit! They replied that he knew well that the idol could not speak or move, which gave Ibraheem

the opportunity to prove the foolishness of worshiping these lifeless objects.

They then realised the senselessness of their beliefs; however, their arrogance would not allow them to admit their foolishness. All they could do was use their power of authority, as tyrants usually do, to punish Ibraheem

. They kept him in chains and plotted their revenge.

They dug a deep pit, filled it with firewood and ignited it. Then they brought a catapult with which to cast Ibraheem

into the fire. Ibraaheem

was put on the catapult, his hands and feet tied. The fire was ready with its flames reaching the sky. The people stood away from the pit because of the great heat. Then the chief priest gave his order to cast Ibraheem

then came close to Ibraheem’s head and asked him: "O Ibraheem, do you wish for anything?" Ibraheem

replied: "Nothing from you." This was not an arrogant reply, rather, he said this due to knowing with full certainty that Allah would help him, and that he was therefore seeking only His help.

The catapult was shot, and Ibraheem

was cast into the fire, but his descent into the blaze was as a descent on steps in a cool garden. The flames were still there, but they did not burn, for Allah the Almighty had issued His command (which means): "…'O fire! Be coolness and safety upon Ibraaheem.'" [Quran: 21:69]

The fire submitted to the will of Allah, becoming cool and safe for Ibraheem

. It only burned his bonds, and he sat in the midst of the fire as if he were sitting in a garden. He

glorified and praised Allah the Almighty, with a heart that contained only his love for Allah. There was not any vacant space therein for fear, awe, or worry. It was replete with love.

The crowd, the chiefs, and the priests sat watching the fire from a distance. It was burning their faces and nearly suffocating them. It continued burning for such a long time that the disbelievers thought it would never be extinguished.

When it did burn out, they were greatly amazed to find Ibraheem

emerging from the pit untouched by the fire. Their faces were black from the smoke, but his was radiant with light by the Grace of Allah. The raging fire had become cool for Ibraheem

and had only charred the ropes which held him. He

walked out of the fire as if he were walking out of a garden. Cries of astonishment were heard from the heathens. Allah Says (what means): "And they intended for him a plan [i.e., harm], but We made them the greatest losers." [Quran: 21:70]

This miracle shamed the tyrants, but it did not cool the flame of anger in their hearts. However, after this event many of the people followed Ibraheem

although some kept their belief a secret for fear of harm or death at the hands of the rulers. Ibraheem

had established a definite reasoning against the idolaters. Nothing was left for him except to reason against the people who proclaimed themselves gods.

Ibraaheem Debates with the Tyrant King

When the king, Namrooth, heard of Ibraaheem’s safe exit from the fire, he was infuriated. He feared that the status of godhead he had proclaimed for himself was now challenged by an ordinary human being. He summoned Ibraheem

to his palace and held a dialogue with him, which Allah the Almighty recounts with (what means): "Have you not considered the one who argued with Ibraaheem about his Lord [merely] because Allah had given him kingship? When Ibraaheem said: 'My Lord is the one who gives life and causes death,' he said: 'I give life and cause death.' Ibraaheem said: 'Indeed, Allah brings up the sun from the east, so bring it up from the west.' So the disbeliever was overwhelmed [by astonishment], and Allah does not guide the wrongdoing people." [Quran: 2:258]

Ibraheem’s fame spread throughout the entire kingdom. People talked about how he had been saved from the blazing fire and how he had debated with the king and left him speechless. In the meantime, Ibraaheem

continued calling people to believe in Allah, exerting a great effort to guide his people to the right path.

tried every means to convince them. However, in spite of his love and care for his people, they felt angry and deserted him. Only one woman and one man of his people shared his belief in Allah. The woman’s name was Sarah, may Allah exalt her mention, who was to become his wife, and the man's name was Luut

who was to become a prophet.

Ibraaheem Leaves for , then

realised that no one else was going to believe in his call, he decided to emigrate. He

left his people and travelled with his wife and Luut (Lot), may Allah exalt their mention, to a city called Ur, then to another called Haaraan, and then to Palestine. Allah Almighty tells us (what means): "So Luut believed him. [Ibraaheem] said: 'Indeed, I will emigrate to [the service of] my Lord. Indeed, He is the Exalted in Might, the Wise.'" [Quran: 29:26]

travelled to , calling people to believe in Allah wherever he would be, judging fairly between people, and guiding them to truth and righteousness.

lived on earth worshiping Allah and calling people to monotheism, but he was journeying to Allah, knowing that his days on earth were limited and that they would be followed by death, and finally, Resurrection. The knowledge of life after death filled Ibraaheem, may Allah exalt his mention, with peace, love, and certitude.